A Pilgrim’s Joy and Suffering in Portugal

Written by Sabine Häberlein on 11. November 2018. Posted in Culture. 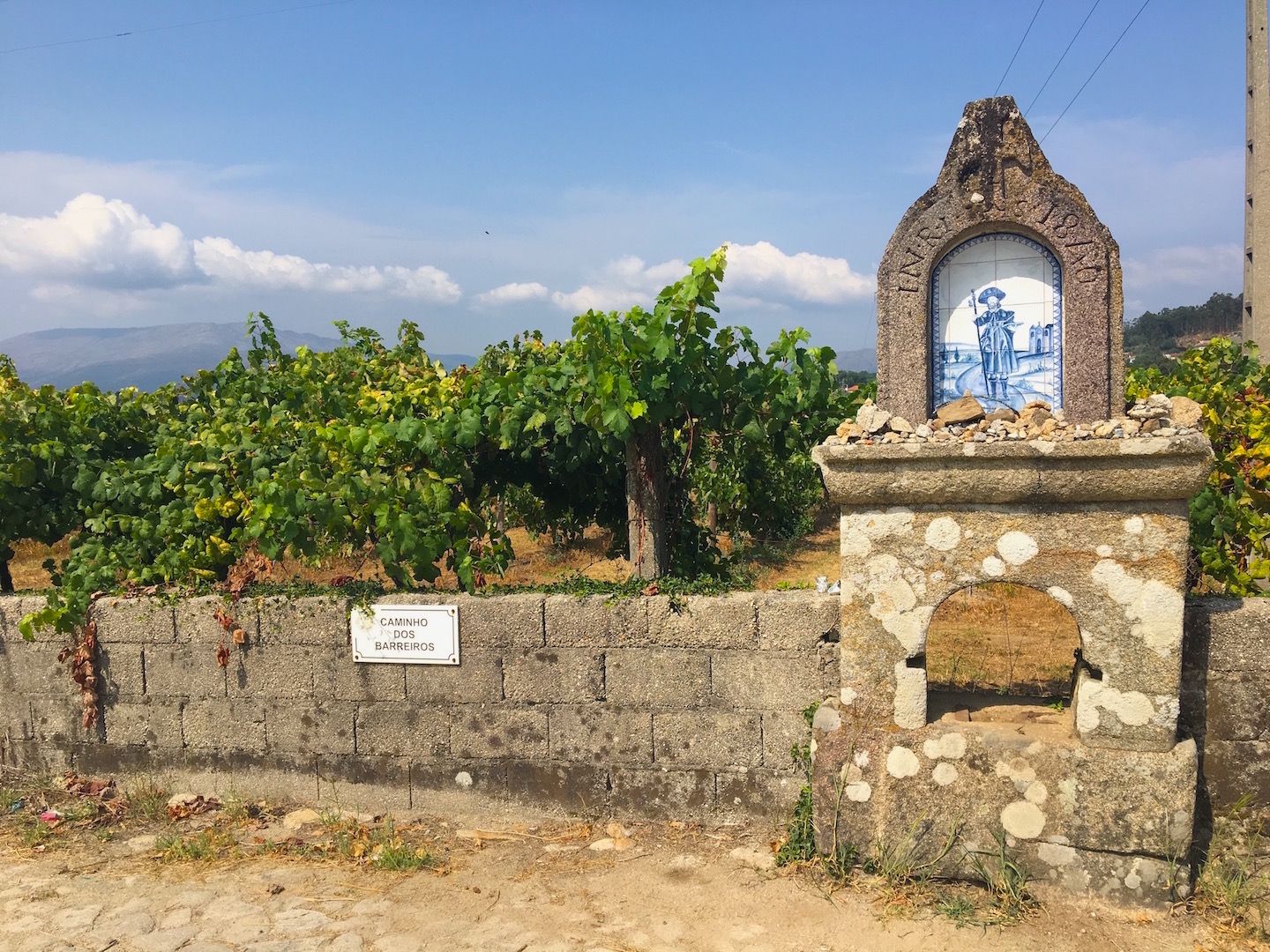 On the road to Santiago

The time had finally arrived. The backpack was packed, the hiking boots on. What I needed for the flight was stowed away in trouser pockets and a belt pouch. Now the adventure could begin and at the crack of dawn, my girlfriend and I flew to Porto. First off, we found our hostel and deposited our backpacks so that we could explore the city. And in Porto there is a lot to see. During the afternoon and evening, we covered 16 kilometres and 32 floors. I was particularly impressed by the typical blue tiles, which decorate several churches and quite a few of the simpler houses.

After a substantial breakfast at the hostel, our pilgrimage got underway and the first stage led us directly along the coast. Our plan today was to reach Lavra so about 24 kilometres lay ahead of us. And that at 33 °C in the shade! We were very grateful that a fresh sea breeze made the heat more bearable.

During the day we met only four other pilgrims. That should change in the evening. As we arrived our lodging – a campsite -, there was already a long queue in front of the registration. This campsite is very popular among pilgrims. It is located right on the Road to Santiago in a wonderful park. Right next to it there is a restaurant. What more do you want after a long walk with tired feet!

On the second day we had to choose: Should we continue along the coast to the Rio Minho, or do we turn off after ten kilometres and follow the more traditional, inland route? We finally decided on the second option which, although more hilly than the coastal road, led us through much more diversified countryside. We didn’t regret our decision – but first continued to also enjoy the picturesque coastal landscape until we turned inland at Vila do Conde.

After a good 25 kilometres, we arrived at the pilgrim accommodation São Pedro in Rates in the afternoon, feeling just a little tired. We were quite surprised to find that all 60 beds were already occupied; however, after being handed a cool refreshing glass of water, we were relieved to be assured “Don’t worry, we won’t send you back out on the road”. The friendliness and helpfulness of the Portuguese was something we were to encounter very often on our journey. That evening, we were supplied with mattresses in the corridor and slept quite comfortably despite being disturbed by the noises in the middle of the night. Even in the pitch dark many of the other pilgrims were already up and leaving the hostel. At 7:45, we were the last ones out!

The sky was cloudy and the temperature quite pleasant when we set out to look for somewhere to have breakfast. It’s easier to walk on a full stomach but the pilgrims’ hostels almost never offer this service. After about six kilometres we found what we were looking for. One difficulty that we experienced on the entire journey to Santiago was the language, both in Portugal and later in Spain. We could communicate in English with only a few of the locals. From time to time we got along with French, and in Spain it helped to speak some Italian. But in the end, we always got what we needed. The journey made me realise that I don’t always have to express myself perfectly and flawlessly in a foreign language. The main thing is to at least try to speak a few words in the local language. As for the rest – all is possible with hands and feet, and a smile!

At noon we arrived in Barcelos. The city may be small, but with its historical buildings there is a lot to see and It would have been worthwhile to stay longer. The ceramics are famous and, of course, the Barcelos cockerel has become a symbol for all of Portugal. After an extended break, we set out for to Portela de Tamel. Here we were given two beds in a three-bunk dormitory in the public hostel Casa da Recoleta, and we were fortunate enough to share the room with four other women. Those who came later had to make do with the mixed dormitory, hard to bear without good earplugs. The modern hostel offers a well-equipped kitchen and Carlos, the hostel warden ordered food for those who didn’t want to cook themselves. Today of all days, the only restaurant in town was closed. But everything turned out well in the end and we were able enjoy our meal outside in the hostel’s beautiful garden.

The next morning began with similar rumblings as the day before. At five o’clock some pilgrims had already left, and we asked ourselves: Where are they going? Why all the stress? We started out later and quite comfortably towards Ponte di Lima, on small roads and dirt roads through vineyards and eucalyptus forests. Friendly people everywhere and even some drivers honked their horns and waved to us. That never happened to me as a pilgrim in Germany!

Our first stop in Ponte de Lima was the Tourist Information Office where the helpful staff found us a nice room in the town centre with its own bathroom – what a luxury! By this time, we had decided to forego the cheap pilgrim hostels where we found the noise and clamour in the early hours of the morning just too disturbing. From now on we would look for private accommodation, B&Bs, hostels or simple hotels.

Our aim on this day was to cover a shorter distance since we had an upward climb of 300 quite steep meters before us. Fellow pilgrims had warned us about this steep section, but for us it was the most beautiful part so far. Shady paths led us through woods, under vine leaf canopies and past the most fragrant bushes – simply stunning!

To begin with, this route was quite idyllic. The old Roman road was shady, and the sandy ground underfoot offered optimal walking conditions. However by the afternoon, after finding ourselves out in the blazing sun on a mostly cobbled and paved trail, we decided to go only as far as Valença, giving ourselves enough time to visit the old fortified city. Valença lies directly on the border to Spain and the Rio Minho (Portuguese) or Río Miño (Spanish) runs between the two countries. How did the journey go on from there? More about our pilgrims’ adventures in Spain coming up in the next instalment.

As a nutritionist and passionate cook, I am interested in everything that has to do with good food. For me, enjoyment is a priority. As I see it, only when something tastes good can it be good for the body and, after all, the health aspect can’t be neglected. When I am on the road, I love to try local specialities, provided they are vegetarian. More recently I have embarked on an intensive study of wild plants, their traditional healing effects as well as their culinary potential. An exciting field! My other passion is opera, music which simply opens my heart and I attend performances just as often as I possibly can.