From the Den of Iniquity to the Luxury Cabaret

Written by Cornelia Menner on 18. August 2019. Posted in Culture. 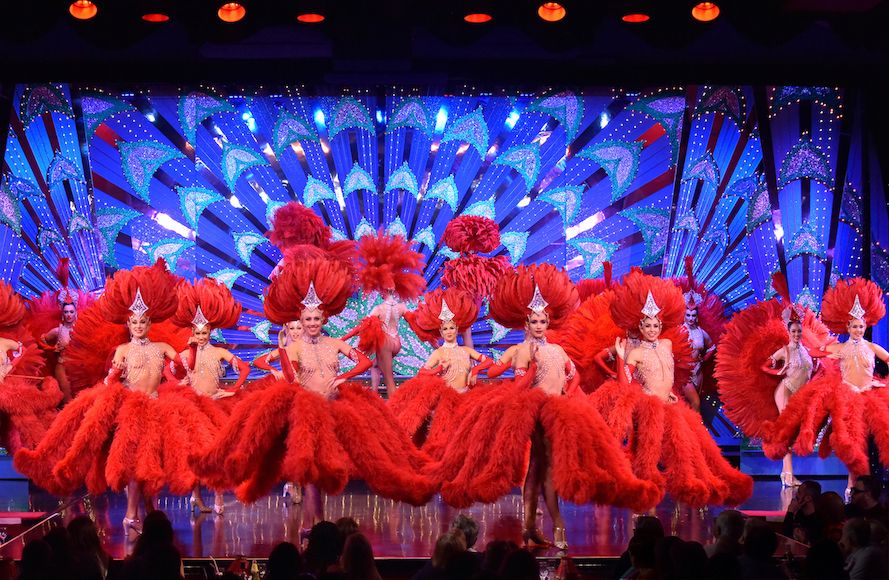 The Moulin Rouge in Paris is 130 years old. Much has changed, but the champagne is still flowing as at Toulouse-Lautrec’s time.

The painter Henri de Toulouse-Lautrec would not have dreamed that in 1889 for „his“ Moulin Rouge: A”snake woman” bending her legs behind her head or she puts one outstretched arm behind the head over on the other shoulder. Two acrobats perform daring balance movements with dizzying tempo. A dancer dives with huge pythons in the deep pool. All of this is part of the Moulin Rouge and his show Féerie in 2019. A show of the finest, this “fairy magic“. And, of course, the famous, inimitable French Cancan can not be missing. This dance was created in the Moulin Rouge in the Belle Epoque. The ladies swing their legs so high that the skirts fly – and when stooping, they also give the view on the bare backside free. A scandal to the then, rather prudish time, but one that guaranteed the revue a full house nightly.

60 perfect dancers from all over the world

130 years later, it needs a bit more: The 60 Doriss Girls of the Moulin Rouge convince with elaborately decorated brightly colored costumes, lush feather headdress, acrobatic dance steps and perfectly coordinated choreography. A firework of colors. The girls are beaming, they sing – sometimes topless. They always look sexy, even if the buttocks remain covered – at most you can see a tricolor-colored panties flashing. Dancers can become only the best here, most are former prima ballerinae: They all are exactly 1.75 meters tall, they all have beautiful long legs – the only way to do the splits. Incidentally, they are named after Doris Haug She was from 1961 until her death in 2014 the choreographer of the now international troupe. For the girls there are strict rules that are laid down in the contract Weight control is just as prescribed as haircut and haircolor; more than two kilos plus or minus are prohibited. In addition, they must train daily and be fit without limits. Because the costumes are kilo heavy, the dance performances pure power acts.

A tribute to Paris

For the entire show applies: Although the Moulin Rouge with its many artists has become more international over the decades, it still offers a thoroughly French spectacle and a tribute to Paris, once and now. This also applies to the Show Féerie, which has been running since 1999. A huge advance was to be made: The numbers were rehearsed for two years and eight million euros invested. But it was worth it: For 20 years, the two performances per evening (one includes dinner) are sold out. Incidentally, not only, as evil tongues claim, Asian tourists sit in the audience. After all, 50 percent of the audience comes from France. And not infrequently a lot of celebrities attend the show: Elton John was just as enthusiastic here as Liza Minelli, Claudia Schiffer, Penelope Cruz or Beyoncé. For the 100th birthday of the Moulin Rouge in the year 1999 Michael Jackson’s sister La Toya had her own performance. By the film with the same name starring Nicole Kidman the „red mill“ also got an updraft.

There is not much left of the improper vice cave where the Parisian bohemian met. Back then dancer La Goulue had her acclaimed performances, eyed warily by the moral guardians. The posters Toulouse-Lautrec, that she and others immortalized are still hanging. And nostalgia with Belle Epoque feeling is just part of the Moulin Rouge, like the French Cancan or the champagne, which is served here every evening. With 240,000 liters per year, this makes the Moulin Rouge the biggest champagne buyer in France. That would probably have pleased the champagne-lover Toulouse-Lautrec very much.