Diving with Sharks in the Maldives

Written by Corinna von Bassewitz on 23. July 2021. Posted in Culture. 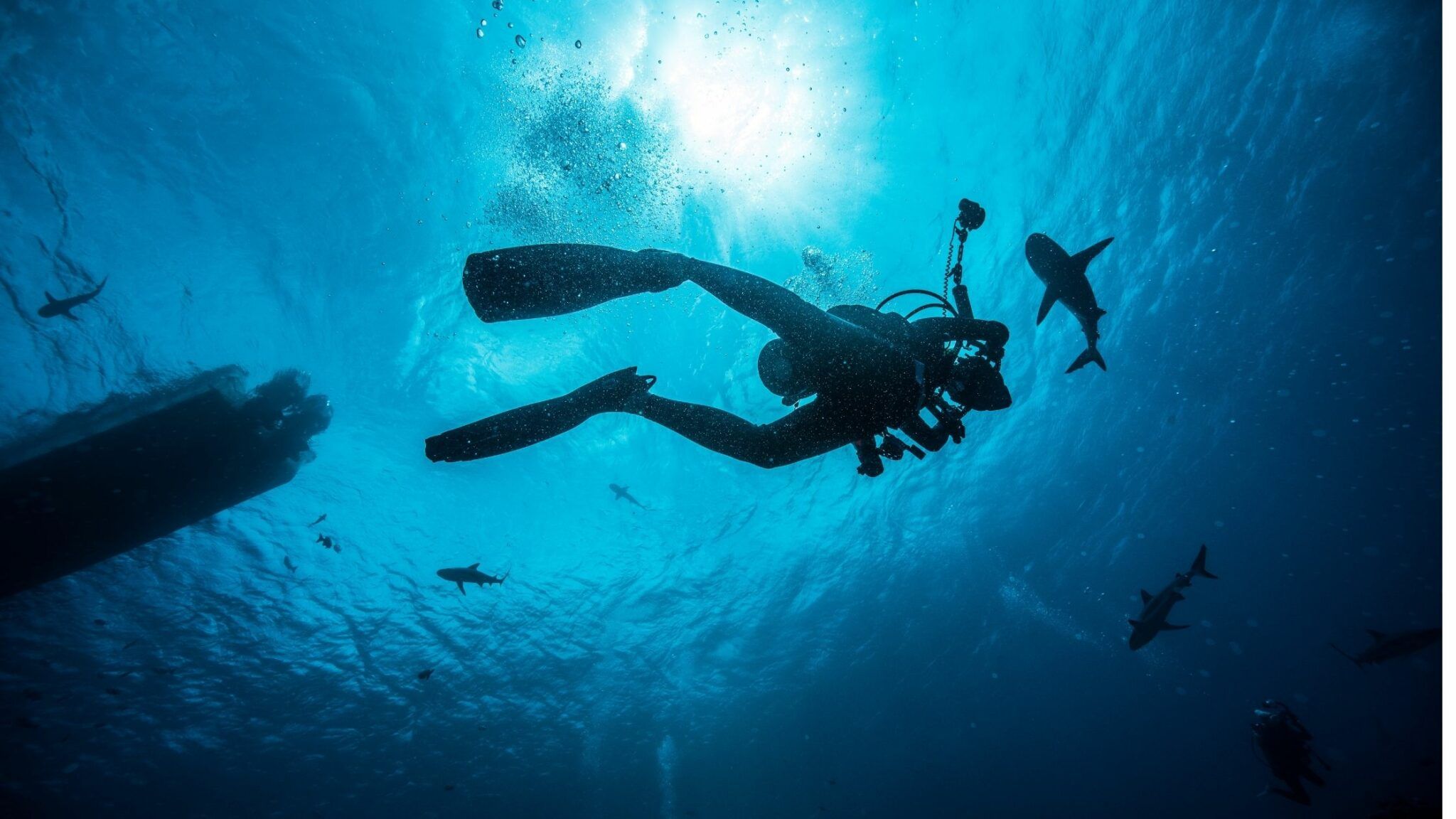 “There is no strong current today,” said Divemaster Hussain Sharmeel, known as Sharky in his briefing aboard the dive boat. “Diving down quickly will not be necessary. We’ll glide slowly down the reef and watch the sharks.”

This is my first time in the Maldives. And my first time diving with sharks. My base is the small Como Cocoa Island in the South Malé Atoll, 40 minutes by speedboat from Malé Airport. 350 meters long, 34 overwater villas, a restaurant and a bar. The night before the dive I hung out at the bar and drank martinis on the rocks. Faru Bar on Cocoa Island is a bar you couldn’t imagine more seductive: Bottle next to bottle on an open shelf and a view over the Tiffany-blue Indian Ocean, where the sun sets behind the horizon every evening with a psychedelic light show.

As you can guess, I was nervous. The Martini was only good for my nerves. I had learned to dive years ago at Looe Key Reef off Big Pine Key in the Florida Keys. Maximum diving depth there: a little over nine meters. The most exciting underwater encounters I had were with stingrays that glided weightlessly through the water with their outstretched wings like angels. I swam in a school of transparent shimmering jellyfish, every now and then I saw a small nurse shark. Otherwise, I admired the colorful diversity of the inhabitants of tropical waters. Sharks in the variety, as they occur on the Maldives, I only knew from hearsay.

Ideal conditions for the first dive with sharks

The next morning at 9:00 a.m. Sharky and I had reached the dive site Vaagali Thila at the South Malé Atoll in the Maldives after 30 minutes boat drive. Behind us, the water sparkled in a soft turquoise. In front of us, the Indian Ocean shimmered dark blue. The unfathomable depth, the reef drops to 30 meters at this point, could only be guessed. The water temperature measured 29 degrees Celsius at the surface, the visibility was good at 25 meters, the current one knot. I had completed around 50 dives in my life. But this, despite ideal conditions, was another story.

I was worried about the sharks, about the depth, about creatures unknown to me. As befits a pre-dive briefing, Sharky’s instructions got my adrenaline pumping. Did I have enough lead weights? Would the nitrox air supply, fortified with supplemental oxygen, be sufficient? I jumped into the clear water with a giant leap and sank down like a stone. Sharky followed me a second later. Lower, lower, lower. I breathed evenly, as he had advised me, bubbles of air rose to the surface, from which I was moving farther and farther away. The ocean had swallowed me.

The predatory fish shot straight through the water like shiny torpedoes, 20, 30, 50, I could not count them. Behind an overhang, I spotted a couple of blunt-nosed whitetip reef sharks, harmless creatures that lazily moved along the reef wall. My depth gauge showed 12 meters, my heart gave a leap. Because now the first gray reef sharks appeared, slender, agile, fast, with half-open mouths showing a lot of very sharp teeth, triangular fins and whatever else belongs to sharks. Stay calm, breathe evenly, don’t provoke, and don’t ever touch them, Sharky had drilled into me. “Sharks are shy. As long as you move calmly through the water, they won’t hurt you.“

Diving with sharks in the Maldives: Don’t panic

The sea was filling up with sharks. It was a whirlpool of big gray bodies twisting and turning and dancing around me. There must have been hundreds of them. Panic rose. Was it my fate to be eaten by a gray reef shark? Where was Sharky? He was hanging out in the water right behind me. He turned around, looked me in the eyes. Hypnosis throuh goggles. “Breathe, breathe,” I remembered him telling me. My pulse rate slowed down.

We ascended a few feet, past the caves for which this section of the reef is popular. My breathing was steady now, I checked to see if there was enough oxygen left in the tank after my panic attack, tared my body. Now I was lying horizontally in the water, observing the school of sharks from above. A formation with eagle rays passed above me like a flying squadron. Almost 45 minutes had passed. Sharky and I slowly surfaced. Back on the boat, diving with clownfish in the Keys seemed like teenage sex.

Back on the boat, on the way back to Como Cocoa Island, the crew served me a hot ginger-honey tea. Recharge my batteries, another adventure was scheduled. This required a seaplane flight, to Hanifaru Bay in the Maldives Baa Atoll, about 160 kilometers from Como Cocoa Island. The Southwest Monsoon had provided Hanifaru Bay with an abundance of plankton. The tiny organisms float in open waters and are the favorite food of whale sharks.

The scuba gear stayed on the island. Bikini, fins and a snorkel are esufficient for an encounter with the biggest shark and also the biggest fish of present times. The plane landed at dusk. A small boat took us to the spot where whale sharks were previously spotted. The boat captain pointed the spotlights into the water. The cone of light made the plankton glow like fireflies. That attracts the whale sharks, Sharky had explained to me. I slid into the water and snorkeled around the boat at a safe distance.

A fish as big as a skyscraper

A huge animal emerged from below, an animal as big as a skyscraper – at least that’s how it appeared to me. A whale shark! These primordial creatures can reach a length of up to 14 meters. With amazingly elegant movements, it waved toward the water’s surface, its mouth snapping open and shut. Thousands of pointy teeth sparkled. It was a beautiful creature with a triangular fin as big as a giga-yacht’s sail and spots like a leopard. I heard a spherical huffing and puffing. The whale shark was now standing vertically in the water, head facing the surface, sucking in the plankton-saturated water, managing up to 6000 liters per hour. Its appetite – thank God not for humans – is enormous. I was speechless and thrilled and felt insignificant and small in the infinite universe of the underwater world.

Travel advice for the Maldives

Entry:
Entry to the Maldives is possible for tourists with a booking confirmation at a resort for the entire duration of their stay. Visas are issued free of charge upon entry. Furthermore, travelers must present a negative PCR test result upon entry. The swab must have been taken no more than 96 hours prior to departure. In addition, the submission of an electronic entry declaration, which must be completed on the website of the Maldivian border authorities before departure, is mandatory. The stay of travelers is generally limited to the booked resort. In case of planned stays in several resorts, a so-called split stay can be applied for at the Maldivian Ministry of Tourism.

Departure:
When returning to Germany, observe the valid entry restrictions such as registration, testing and quarantine regulations and contact the health office of your residence if entering from a risk area.

Sharks of the World * is the essential illustrated guide for anyone interested in these magnificent creatures.Now fully revised and updated, it covers more than 525 of the world’s shark species and is packed with colour illustrations, colour photos and informative diagrams. Princeton Univ PR, 624 pages, 46,99 euro

*This is an affiliated link. You don’t pay more. It is just a little thank you for our team.