In Search of the Blue Domes

Written by Margit Rüdiger on 4. August 2019. Leave a Comment 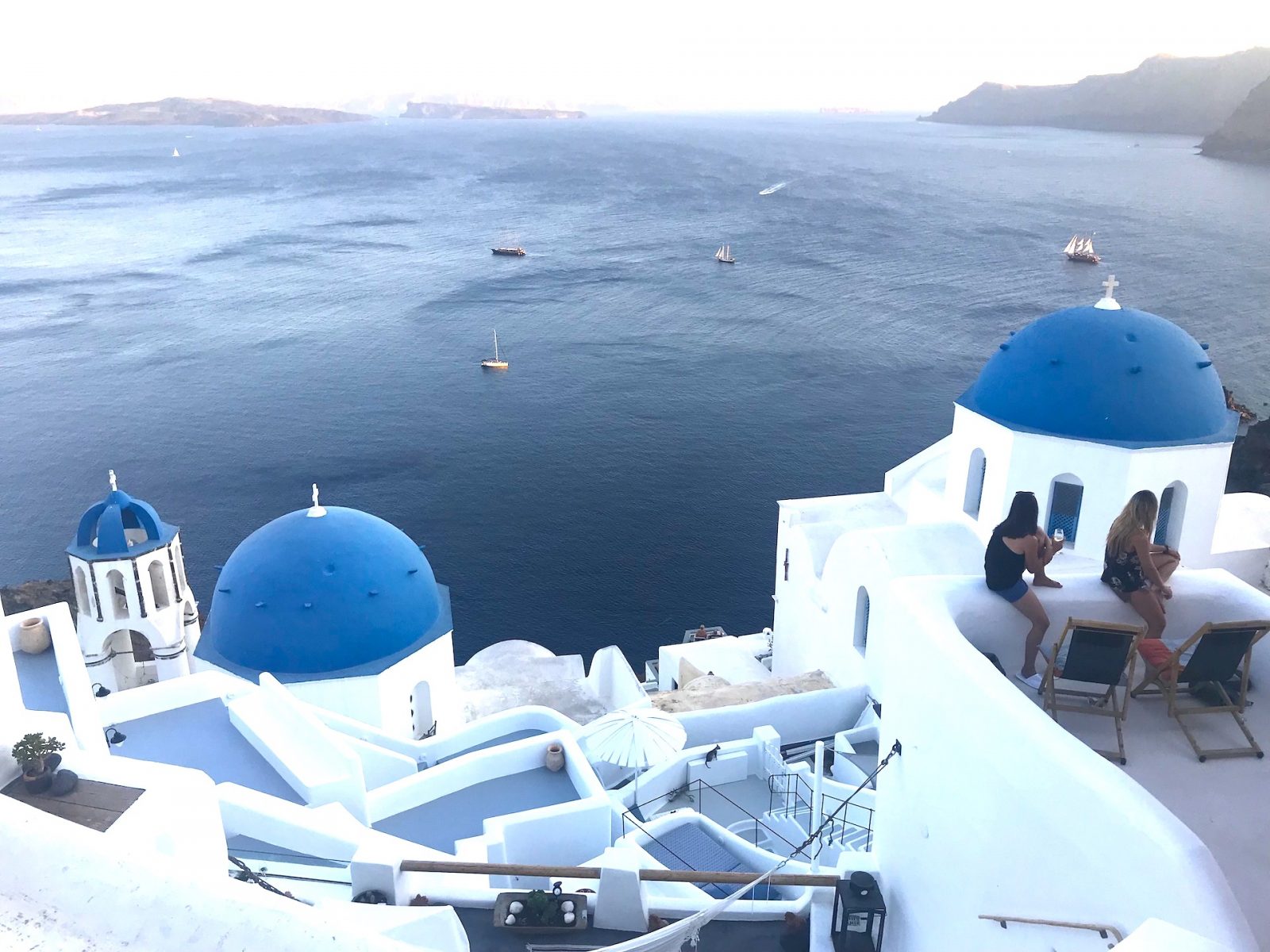 I may have found the famous postcard motif, but the myth of Santorini still evades me.

I am torn between the goodwill I normally extend to a holiday destination that is new to me and the gut feeling I trust that when something just doesn’t seem right. And since I took this trip at my own expense, I am free to write the truth as I see it. So, my opinion: Santorini is completely overrated. Yes, the picturesque little villages with their white houses nestling on on the slopes or clustering around a hill are lovely. But this is the case on every Cycladic island. And yes, there are glorious sunsets to watch. But aren’t these to be found everywhere? Even at home in Bavaria?

In terms of geography and history, Santorini or Thera – as the Greeks call it – is an anomaly. The 92.5 km² large archipelago in the south of the Cyclades consists of five islands, formed by volcanic activities 3,600 years ago. The main island Thira, and the islands Thirasia and Aspronisi are grouped in a ring around the water-flooded Caldera, a kind of huge cauldron said to be around 400 meters deep. In its centre lie the two islands Palea Kameni and Nea Kameni, where the last volcanic eruption took place in 1950. So much for history.

Donkey tour, no thanks!

In aiming to do some relaxed exploring of Santorini at the end of June, I perhaps just picked the wrong month, It was not relaxed at all. Hordes of people pour off the cruise ships and, at a time, up to seven of these ocean giants can be found at anchor in the Caldera just outside the capital Firá. Once on land, passengers are carried up the steep path by donkey or mule. The “donkey tour” is also popular with those tourists not on cruise ships. This is just incomprehensible to me which is why I wasn’t tempted to take any photos. How can one enjoy such a ride, seeing the distraught animals toiling in the blazing sun, pressing themselves against the rocks in desperate search of shade. Without water, without food. After all, for a mere 6 Euros, the 220 meters to the top and back can easily be reached by cable car. Or one can walk up the 588 steps of the serpentine-like Karavolades stairs connecting Firá with the old port. Once at the top, the masses jostle their way through the narrow, winding alleys. Here a selfie, there a group photo, Gyros in hand.

The small village Oia (pronounced Ia), at Santorini’s northern tip, is considered one of the most beautiful on the island and it is here, at its highest point, that armies of tourists converge to marvel at the sunset. Not one inch on the narrow viewing path do they budge until the sun has sunk blood- red into the sea and the obligitory photos have been snapped. There are exquisite boutiques, fine restaurants and classy bars, but the Mediterranean joie-de-vivre has its price everywhere on Santorini. In Oia I find what I’m looking for – the postcard motif typical of every image of Santorini. There is a specific spot here where three blue domes lying close to each other can be captured on one photo. Other than that, the luminous blue church roofs behind the snow-white bell tower in the Cycladic style of architecture are more scattered.

On a chain of rocks opposite the volcanic island lies Imerovigli, less picturesque and less crowded. The fact that there is less hustle and bustle here can certainly be attributed to the arduous climb. From the bus stop at the main road leading to Oia, it’s a steep 20 minute walk, a 10% gradient according to the road sign. Those who live up there or who want to savour the Buddha-Bar’s fantastic view of the sea and the setting sun, as well as its great drinks, would be well advised to rent some means of transport. I like Firostefani, a neighbouring village on the way to Firá, the best. This is where our hotel, the Santorini Palace, is located. It’s a little removed from the mass tourism and one can amble through the alleys without all the pushing and shoving. Instead of chic boutiques there are cosy little restaurants and cafés with a fabulous view of the Aegean Sea and the Caldera.

Lying embedded in rugged towering rocks, the black beach of Kamari certainly is a romantic spot. If only it weren’t for the neat rows of pink, and in the next beach section, yellow, couches that almost hide the black lava sand from view. “From October onward it’s more pleasant on our island”, a boutique owner in Firá tells me: “It’s still warm then and only locals are here, except for the Chinese of course. They come all year round.” Oh well. But I do have to admit one thing. Santorini really does look lovely in the photos…