Written by Corinna von Bassewitz on 5. June 2021. Posted in Culture. 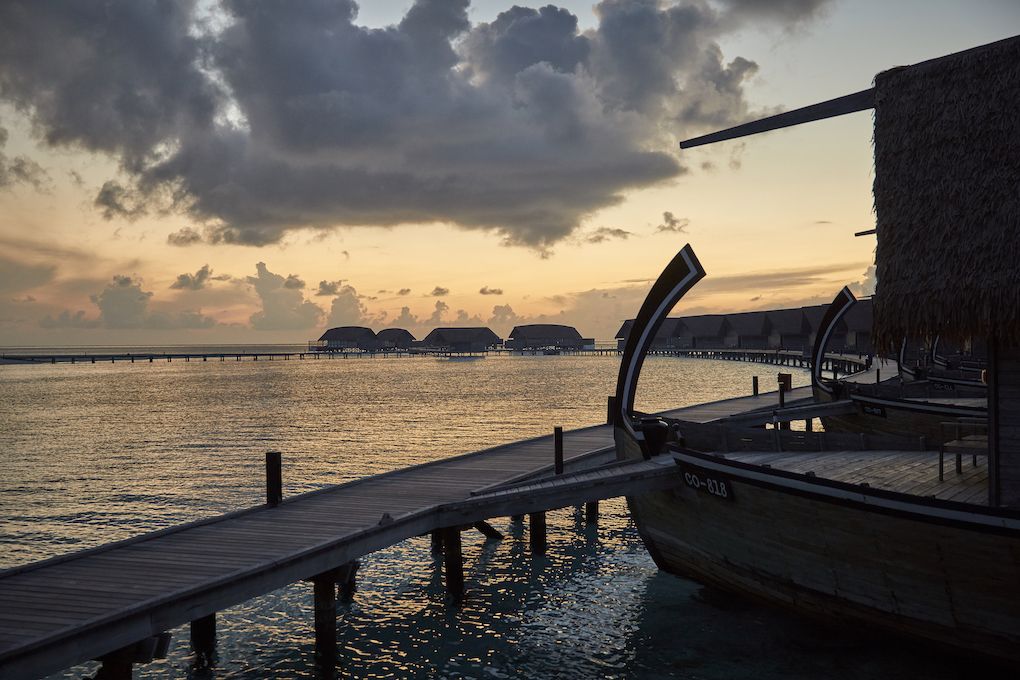 To be sure, the great time of travelling has not yet returned. A short trip to Cocoa Island and Maalifushi in the Maldives is a good start to what is still to come.

The resort of Como Cocoa Island on the South Malé Atoll is a 40-minute speedboat ride from Velane International Airport on the main island of Malé. A first feeling of happiness sets in after the nine-hour journey from Germany: The air is soft, the yacht flies over thousands of shades of blue. It is a spectacle that only the Indian Ocean around the Maldives can produce. The capital Malé, its skyline rising into the sky like a Little Manhattan, recedes from view.

The strange world as we were used to it for so long now fades in my memory. Soon we docked at the Jetty: palm trees, sun, the air measures a pleasant 30 degrees, I stepped onto a tiny island in the middle of an infinity pool called the Indian Ocean. General Manager Oscar Perez of Como Cocoa Island pushed an open coconut into my hand. I didn’t have to think long: this is paradise. What you experience when you walk barefoot on the sand is an overwhelming feeling of freedom and happiness.

With a length of only 350 metres, Como Cocoa Island offers an amazing variety: a sandbank, for example, which extends to 800 metres at low tide in the turquoise water and a house reef with an impressive tropical underwater world with colorful clown fish, eagle rays and black tip sharks. It’s located behind the overwater villas, a few steps down from the sun deck and you’re ready to snorkel. After all, more than 20 dive sites can be reached within 30 minutes by boat from the resort. Reef diving, wreck diving and night snorkeling are on the agenda at the Padi-certified dive center. Instructor Hussein Sharmeel, nicknamed “Sharky”, is the master of ceremonies for the underwater expeditions.

The understated aesthetics of the reception and the only restaurant blend harmoniously with the vegetation of frangipani, breadfruit and banyan trees. A hammock is set between two palm trees; it doesn’t get more relaxing than this. The infinity pool is on the sunset side of the island. The Faru beach bar next to it offers drinks to match the psychedelic natural spectacle as the sun disappears in slow motion behind the horizon. Vietnamese fans fan cool air.

A highlight on Como Cocoa Island is the wine tasting, an admittedly unusual activity on a tropical island. “At normal times, our temperature-controlled wine cellar holds over 300 labels from well-known international vintners,” says sommelier Rameesh. From table wine to Grand Cru, everything is available. With shellfish, the wine specialist recommends a Sauvignon Blanc from Tement in Austria. With Indian curry there is a Primitivo from Australia, with tuna, dorado or wahoo a peppery Syrah from Clos Mireille in France. Reality disappears into a cotton wool universe.

Como Cocoa Island’s 34 overwater villas, restaurant, bar and reception were redesigned by Singaporean architect Yew Kuan Cheong, and the resort’s full renovation was completed in January 2020. The Como Shambhala Retreat’s wellness facilities also underwent an upgrade, with the construction of the only hydrotherapy pool (with high-pressure jets!) in the Maldives, an open Yoga and Pilates studio set in an elevated position above the lagoon with 360° views over the ocean, and below, a top-equipped gym and spa offering the Asian-based Como Shambhala treatments. My favorite was the Indian scalp massage, where a geranium essential oil is drizzled and rubbed onto the scalp and combined with massage moves to open the chakra and get the energy flowing.

Sleeping in a Dhoni villa

Accommodation ranges from pretty Dhoni villas that look like traditional Maldivian boats, to sprawling water bungalows with private pools. I stayed in one of the larger villas, accessed from the mainland via a curved jetty. It is built almost entirely of wood, the roof covered with weather-resistant reed. Inside, white and blue dominate, the furniture is pleasantly unagitated – New England chic instead of Robinson Crusoe style.

The oversized bathroom is tiled with sandstone and generously stocked with Como Shambala shampoos and body lotions. The fine cosmetics are specially produced by the renowned herbal specialist G. Baldwins & Co in London for all Como Group properties. The fragrance, an invigorating blend with essential oils of eucalyptus, geranium, lavender and peppermint, will be remembered forever. As does the sound of the waves when you push aside the floor-to-ceiling glass wall at night, and you gently drift into a deep sleep.

Ying and Yang and underwater adventures on Como Maalifushi

The next day a quick breakfast of ginger tea and Shambhala muesli. The plane leaves from Como Cocoa Island at 10.00 am. The speedboat ride to the airport takes seven minutes. Calling a wooden platform in the middle of the sea an airport is perhaps a little presumptuous, but appropriately large for the small seaplane of Manta Air, which flies to atolls in the Maldives. A 45-minute flight, the water world far below blurs into an abstract painting: a blue canvas with bright splashes. Our destination, Como Maalifushi on Thaa Atoll, is in sight.

The resort’s 65 overwater and beach villas are tropical minimalism at its best: clean lines, thatched roofs, faded wood and billowing white muslin. Everything on Como Maalifushi, the only inhabited island on Thaa Atoll in the southwest of the archipelago, is sophisticated yet unpretentious. In front of my villa on the lagoon is a white cruiser bike, a perfect vehicle for exploring the island. From the bumpy wooden walkway, you are immersed in a paradisiacal idyll, a tropical wonderland of palms, hibiscus and tall banyan trees that stretches along the spine of the island. One hardly suspects that there are houses to the right and left of the sandy path. They duck behind high walls, some of them on their own beach, feigning perfect seclusion.

Ultimate solitude I found at midday. It was only a stone’s throw away from Maalifushi. The tiny island of Laavadhoo is a pristine tropical princess with lush vegetation and heaps of almost kitschy Instagram motifs. Well, the island was not completely untouched. There were little wooden tables on the small beach, an attentive butler had set up a buffet with salads, saté skewers and iced champagne. Later, as I wandered through an avenue of coconut palms, I came across an abandoned adventure playground and settled down on one of the swings. The blue of the ocean shimmering through the mangroves had a hypnotic effect.

The next day, at sunrise, I cycled to the Shambhala retreat: Yoga with an Indian guru. The ommm still reverberated as I chose French toast for breakfast, a sweet revelation with fresh mangoes and shredded coconut. Later, I popped into the water sports center and grabbed goggles and fins. Swimming with hawksbill turtles was my plan. 15 minutes was the trip on a dive boat. 60 minutes was the timid approach to the elegant sea dwellers with the bad-tempered facial expressions.

The dive team can arrange even more extraordinary trips, including deep-sea fishing on an open Hatteras yacht, dolphin watching and night swimming with whale sharks. Fishermen attract the giants of the sea after dark by lighting up plankton, a favorite food of the giants. The impressive fish grow up to 14 meters long, their wide mouths equipped with over 3600 teeth through which they filter the plankton and miniscule sea creatures with spherical sounds. The tiny humble human next to the giant primordial animal is more enlightening than any yoga class can be.
Four days and five nights. My head is filled with a thousand images, with memorable picture postcards from paradise.