A Boat Ride is funny… 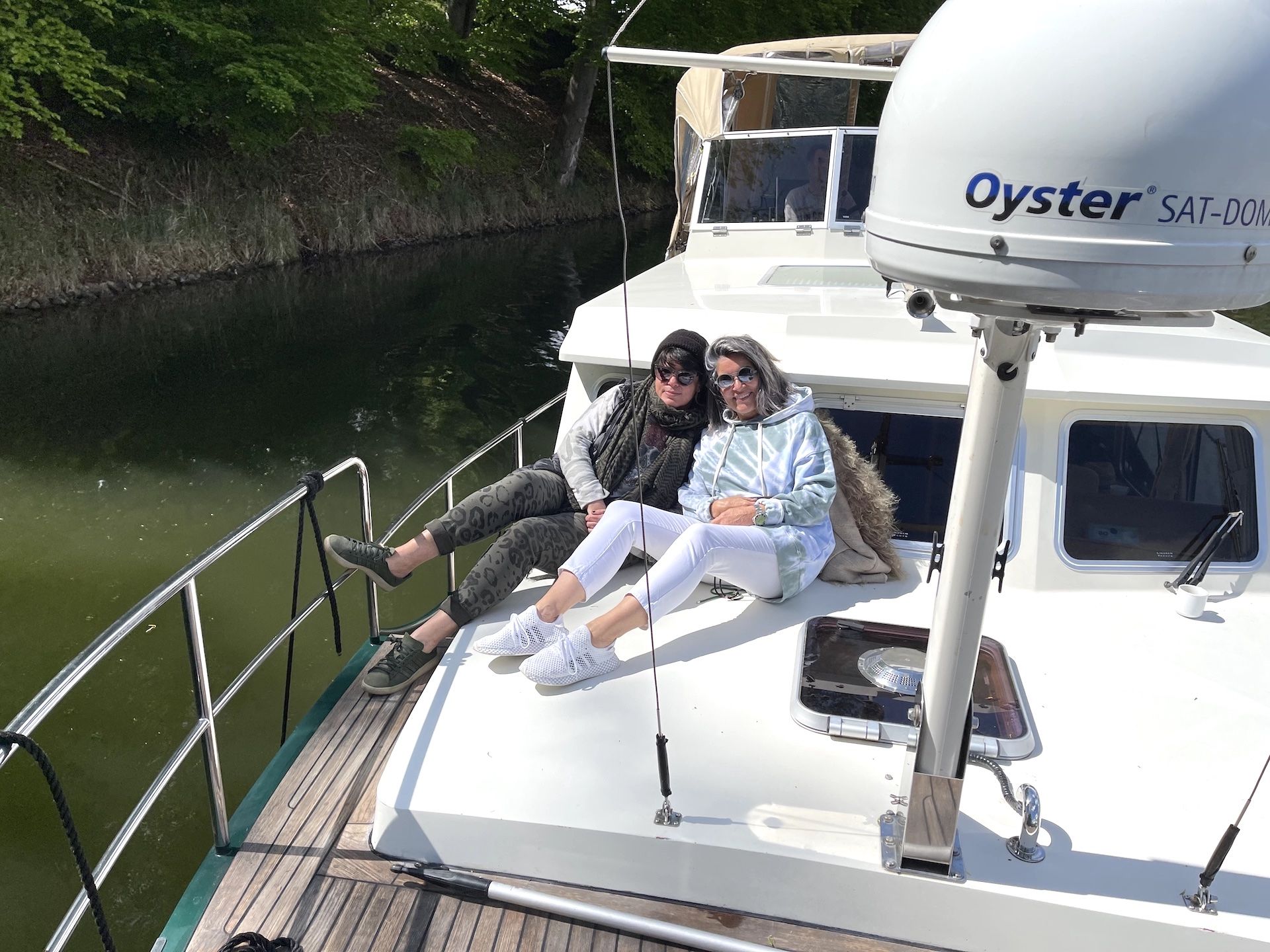 … a boat ride that is beautiful, because you can see foreign countries and many other things there … At least that’s what an old Germany children’s song says. However, we do not sail on the ocean or a lake, or at least not primarily, but rather the Havel, more precisely the Upper Havel, in Brandenburg near Berlin. However, the biggest adventure for me is to spend a week with several people in a small space for the first time.

We were very lucky, I have to say. Because our boat tour, which we booked in December last year, was on the brink for a long time. Only a few days before the four of us – my sister and I, each with a husband – wanted to “set sail” on the Friday before Pentecost, the state government of Brandenburg gave the go for the charter ships and outdoor catering. Everything requires a negative corona test or complete vaccination and mask requirement, of course.

Also a perfect gift for cruisers

“Boaters Logbook”* is the perfect log book for narrow boat owners, continuous cruisers, waterway users, holiday makers or anyone who is cruising the cut. Mark you waypoints and essential locations as you travel the canal network so you have a reminder of the best places to stop off or moor up. 120 pages, paperback £ 5,99

“Hilde”, that is the name of our ship, is waiting for us in the old port of Zehdenick. She is a really nice boat. British Racing Green with a thick brown cord all around, polished to a high gloss. It will be our home for seven days. More of a challenge for me. I’m used to “life” on the water from sailing, but only on deck. The very idea of having to sleep in a narrow, low cabin puts beads of sweat on my forehead.

I’m pretty claustrophobic and hate to remember a night at the Ice Hotel in Jukkasjärvi in Swedish Lapland. You could hardly sit up on the fur covered bed without bumping your head against the curved ice ceiling. In the middle of the night I fled the igloo to seek refuge in one of the wooden huts that belonged to it. Fortunately, there is a hatch right above my bed here on the boat. You can set it up and then straighten yourself up completely, if you haven’t hit your head beforehand. What happened to me several times…

Four people in a small space

The nights on board were ultimately less bad for me than I feared. Instead, it was very relaxed on deck during the boat ride and in the harbors where we took supplies and – whenever possible – had dinner in a restaurant with outdoor catering. Now and then the weather thwarted our plans. Then it was time to cook in the narrow galley. That and the subsequent dish washing is rather challenging in such a small space. I have to admit, my part on board was the easiest anyway. I mainly had duties in the under deck, while the men took over the control and navigation, and my sister, already practiced from the last boat ride on the rive Havel, mastered the locks and mooring at the port.

We have also seen foreign countries, as it says in the children’s song. Because from a human point of view, the Brandenburger in person is very far from the mentalitiy of us Bavarians. And we are also grumpy sometimes … But the landscape is all the friendlier. Some sections of the river could be mistaken for the Amazon if the river were a bit wider and the vegetation a bit more “tropical”. But there is also green jungle here, and the chirping of birds, especially in the morning hours, is extremely musical. All kinds of animals cavort near the shore and in the water at any time of the day – herons and fishes, ducks, great crested grebes, beavers. And a wild horse gallops alongside us on a hill by the river, while deer graze peacefully on the lush meadows.

We did also see “some other things” after all. For example the woman from the neighboring ship who bathed completely naked in the ice-cold river in the early morning – at least that’s what my sister told me while I was still dreaming in my cabin. The stoned youngsters who shot down rockets at midnight near our anchorage and not only put a stray red cat to flight. In the port of Fürstenberg the rescue service had to be called after a woman jumped from one of the boats – somewhat inelegant to say – onto the jetty to moor there and landed so badly that the cruciate ligament in one of her knees was torn. And in every port we made the acquaintance of a local swan pair, mostly with offspring, who came to the jetty to beg. If the food delivery didn’t go fast enough for their taste, they hissed angrily and snapped at a bald toe.

Shower only when you have to

What I definitely can’t get used to is the hygiene behavior on board. That’s why I don’t like camping or caravan vacations. Washing in the wet cell – cell is the right expression! – does not correspond to my ideas of body cleaning. Showering better not – at least that is what the tough lady harbor master said when the boat was handed over to us in Zehdenick. In her opinion it wouldn’t even be necessary within a week. Whoever tried to shower, lives up to the word wet cell. Once this is submerged, you have to “vacuum” it, and also then it is still damp all around for hours. We don’t even want to talk about washing our hair. And the shower cabins in the ports are still closed due to the corona.

But I remember a trekking holiday in the Hoggar Mountains in the south of Algeria, when we couldn’t feel any running water on our bodies for almost ten days. Nevertheless, we obviously didn’t smell so unpleasant afterwards that someone would have denied us entry to the oasis of Tamanrasset. Nevertheless, my first official act when we get home from this boat trip will be a long bath.

* This is an affiliated link. You don’t pay more. It is just a little thank you for our team.