Written by Margit Rüdiger on 9. December 2018. Posted in Culture. 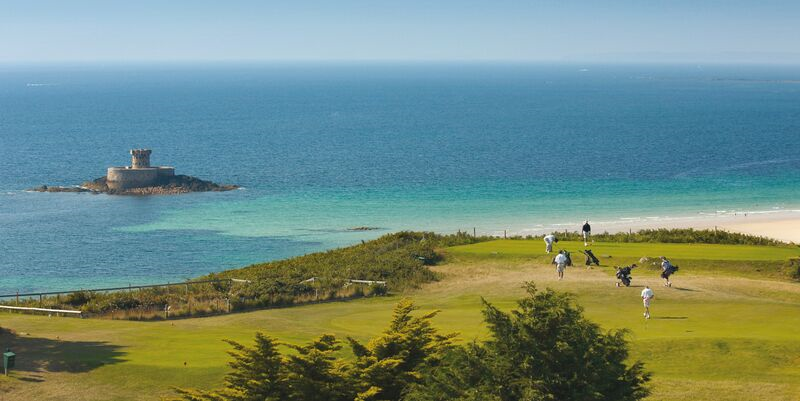 The green Channel Island with a wealth of history

What can I see flying into Jersey? Today – absulutely nothing! Thick grey fog shrouds the cabin windows. Late autumn is probably not the best of times to travel to the Channel Islands and it is obvious now why the Air Dolomiti plane has no more than 30 passengers besides me. Shortly before landing, the green landscape appears outside the windows. Lots of green. And wind. And a rough landing!

Bad weather and a giant Dino

The lady at passport control promises better weather tomorrow. Google predicts storms. A life-sized plastic Chasmosaurus in a high-voltage (25,000VDC) cage bares its yellow teeth non-stop in the airport terminal. Piles of golf luggage. Unperturbed golfers in short-sleeved shirts at temperatures of 14° C look around nonchalantly as if this is just the weather they’d hoped for. Long queues at the taxi stand. An unpleasant rain lashes into the waiting shelter. Then finally it’s my turn and a black London taxi drops me at my destination in about 10 minutes.

The warm welcome at the Atlantic Hotel makes up for everything. Cosy, as the English would say. Homey and stylish at the same time. An enchanting small luxury hotel with 50 opulent rooms, garden studios and two suites. Indoor and outdoor pools, sauna, mini-gym and a golf course which begins directly behind the house. The Atlantic has been in the family for 48 years, host Patrick Burke tells me as I enjoy a delicious dinner of freshly caught fish in his restaurant “Ocean”. Star class. New Chef Will Holland was named “UK Restaurant Chef of the Year“ in 2016. At 10 p.m. Jersey time I fall into bed – lulled to sleep by the steady thundering of the Atlantic waves. Outside of my window, the palm trees are still being whipped about by the wind.

The first glimpse of the ocean

The next morning I awaken to bright sunshine and 14 degrees. From my balcony I take in the breathtaking view of St. Ouen Bay, a nature reserve of extraordinary natural beauty. In the middle of the sea stands the 18th century fortress La Rocco Tower, which I‘ll explore more closely later on. Miles of white sandy beaches, “Les Blanches Banques”. The wind has subsided and will stay that way for the next few days. My Jersey adventure can begin. This visit I‘ve decided not to rent a car, preferring to explore as much as possible on foot and by public transport. That way, I can see much more than I would sitting behind the wheel. And apart from that, Jersey has a left-hand traffic system so driving means full-on concentration for me.

Corbiere Lighthouse is four kilometers (2,5 miles) from the hotel. The Highlands above the Lighthouse offer an incredible view over the Atlantic It‘s low tide, just the right time to walk to the tower, which can’t be reached otherwise. My path leads through bizarre rock formations that would normally be under water. A locked gate at its base prevents one from entering the lighthouse itself. The alarm bell is the signal that the tide is about to come in, and fairly quickly. As soon as it sounds, it’s time to start back. I just read a story about Petit Corbiere where a lighthouse keeper drowned trying to save someone who was cut off by the tide. I’d better get a move on then!

The Capital St Helier. The French name is deceptive. „Very British“ would best describe the small town with it’s pretty harbor at St. Aubin’s Bay and Elizabeth Castle, which was built on a tidal island in the 16th century. In use up until 1923, it was fortified again during the German occupation (1940-1945). The castle can be reached at low tide by boat or on foot. Even now in off-season, a rush hour hustle and bustle prevails in the streets and squares of St. Helier’s pedestrian zone. Along with the ubiquitous chain stores, there are many small independent shops as well. Lots of pubs, cafés and restaurants invite one to come in and stay awhile. Vegan food is an established fixture here, and I discover a real Cornish Bakery just like the ones found on every street corner in Cornwall. That isn‘t the only reason why Jersey reminds me so much of that county.

Gorey, on the southeast coast of the island is a real insider tip. A picturesque fishing village with pastel-coloured houses and restaurants, in the shadow of the towering medieval Mont Orgueil Castle. A lot in Gorey revolves around food: Jersey Royal new potatoes are grown on the steep fields opposite the castle and fishing is a very important local industry. At low tide, one can catch a glimpse of the oyster beds off the coast. Whilst there are many inviting restaurants, cafes & bistros at the pier offering the “Catch of the Day”, the residential area is located in the village centre. This is where the locals meet and where delightful shops such as Jersey Pearl and Jane James Handicrafts can be found. The tastefully decorated fashion boutique “Eclat” is definitely worth a visit! Here Zoe sells a treasure trove of beautiful items, including her mother’s wonderfully unique hats. The name of the label is Amorphia. I just couldn’t resist and bought a black hat embroidered with white flowers. Right next door, there’s a café with a tempting selection of home-baked cakes and tasty snacks.

The Jersey Zoo, founded in 1958 by British Gerald Malcom Durrell, brother of the writer Laurence Durrell, is a famous landmark of the island. On the eight hectare site, the self-taught zoologist and author provided a home for a variety of gorilla and lemur species as well as several reptile genera. He mission was to create more than just a simple “animal show” and to this day, the Zoo is committed to the propogation of endangered species. In the enclosures, for example, plants indigenous to the home countries of the various animals were planted to replicate their natural habitat. A long extinct bird, the Dodo, the heraldic animal of Mauritius, adorns the zoo’s logo. But a visit to the zoo is worthwhile not only to see the animals. The spacious complex has two restaurants and the seating area beneath the old trees is the ideal place to linger and just relax. I was glad that I’d brought along my book.

The Jersey War Tunnels are a close-up experience in history. Oppressive but informative. During WWII, construction of the tunnel system was started by Hitler in 1941 as part of the Jersey fortifications. Hohlenganganlage 8, as it was then called, was to be a huge network of underground tunnels where the German occupying forces planned to hold out against Allied air raids and bombings as they prepared for the invasion. Initially designed as an ammunition depot, it also served as an underground military hospital in 1944. Today, the approximately one kilometre-long shafts house an exhibition covering various topics relating to the German occupation of the Channel Islands, including “Cooperation and Resistance”, “Stay or Leave the Island?”, “Daily Life on the Islands”, etc. The exhibition (which has been on show since 2001) is elaborate and realistic. For example, there is the lifelike figure of a uniformed soldier who speaks to you from a monitor. Or one can listen to contemporary witnesses talking about their experiences during the occupation. I was certainly very impressed by “Captive Island”

Five things you need to know about Jersey