Written by Chris & Carsten Stricker on 4. August 2018. Posted in Culture. 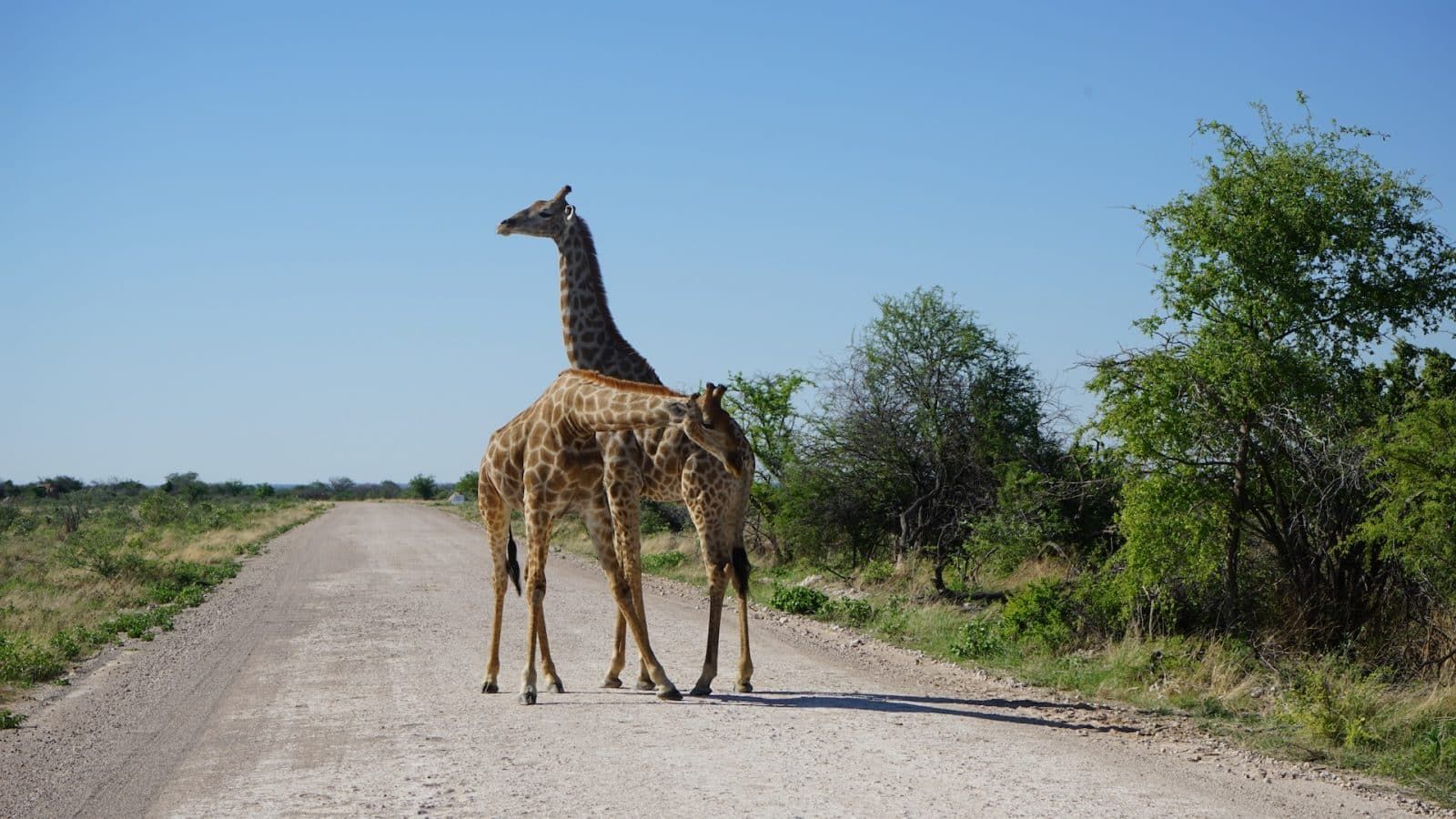 On the road in a vast and quiet land

We had been looking forward to Namibia for quite some time. Two and a half times the size of Germany, but with only 2.3 million inhabitants. Peace and quiet! Namib, the oldest desert in the world. Cheetahs, elephants, antelopes and giraffes – a paradise for animal freaks like us. The Kalahari and Etosha Pan, places we had only seen in documentaries. But along with that, and much less glorious, Germany‘s colonial and industrial history. How do you approach such a country? We approached (of course) by plane with Qatar Airways and a stopover in Doha, one of the most modern airports in the world. What a contrast to Windhoek International which, in comparison, felt quite provincial and manageable, but unhurried as well.

Prior to our trip, we had already rented the vehicle which was to be our transport for more than 4000 km over the course of the next three weeks. Four-wheel drive, off-road vehicles are an absolute must to traverse Namibia’s mostly unpaved roads. A lot of time is spent on gravel tracks so our tip is: Don’t be tempted to economise here – choose one of the larger, “high-legged” off-road vehicles. Unfortunately, we didn’t! Check out  for a good on-site Europacar service with a comprehensive insurance package. We spent the first two nights in Windhoek to getting acclimatised. 1650 meters above sea level and over 30°C. The first person we talked to on the street was a colorful Windhoek local who had spent much of his youth in East Berlin. He immediately identified us as tourists and hailed us in accent-free German with the pioneer greeting “Always ready!“ For us, coming from Munich and the Ruhr area, it was a rather bizarre experience and a first indication of how strongly Namibia, the former „German Southwest“, is connected to us and our recent history, both as a pre-First World War colony and a socialist partner country of the GDR. 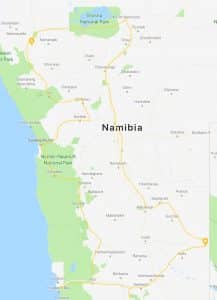 Unlike many visitors who stay mostly in the Windhoek, Namib and Etosha triangle, we had planned a more comprehensive route which took us south to the South African border. Our adventure began with the 550 kilometres into the Kalahari, to the border of the Transfrontier Park and the country triangle of Botswana, South Africa and Namibia. Here we spent the night in the small chalets of the Kalahari Game Lodge. From there we travelled west to the Fish River Gorge, the second largest canyon in the world. Further and further west, skirting the edges of the restricted area where diamonds have been mined for over 100 years. The railway line, which ends at the coastal town of Lüderitz, has probably been unused for just as long. We crossed the Namib towards the north with a stay in Sesriem near Sossusvlei. Right in the middle of the desert, site of a petrified forest and the world’s largest dune, this place is certainly one of the most visited and photographed places in the country. Because of the heat (temperatures had reached over 40 °C) we were already looking forward to the next stop on our journey. The coastal town of Svakopmund, where temperatures are moderate even in the hot season, has an almost Mediterranean feel but we really wanted to get back to the quiet of nature. Next stop: Erongo Mountains where, in the excellent Erongo Mountain Lodge, we slept in (admittedly quite luxurious) tents for the first time. The northernmost point of our round trip was the Etendeka Mountains, from where we drove to the Etosha Pan. At the eastern end of this huge salt lake we spent some more quiet days in a lodge where, from our tent, we could observe the animals gathering at the nearby waterhole. Well rested, we returned to Windhoek and from there, back home to Germany.

The five „must-do’s“ in Namibia

A jeep ride into the Fish River Canyon, one of the absolute highlights of our trip. The Fish River Lodge is located directly at the canyon and the view from the bungalows into the 500-metre deep gorge is breathtaking! In the early hours of the morning we embarked on a jeep tour to the foot of the gorge with our guide Jerry (short for Jerome), and a very nice couple from New Zealand. The 27 kilometres took two and a half hours – one way! Over hill and dale we went, over narrow passes, through volcanic landscapes and down to the river bed. We were rewarded with a swim in a lake and many interesting anecdotes from Jerry. He also told us that quiver trees found here are unique and only exist in the Fish River Canyon. As an interesting aside: the nature reserve is owned and taken care of by the Rockefeller family.

Bratwurst in the “German village” of Lüderitz. Although it’s a little off the beaten track, the German coastal town of Lüderitz is well worth a visit. It lies below the Namib, directly bordering the restricted area. Little has changed here since the 1900s. The inscriptions on the houses indicate their original functions: Gymnastics Club, Bowling Alley and Iron Foundry. There is the Ladies Dressmaker and, of course, the brewery “Hansa”. And should the traveler be overcome with hunger pangs for a good old German sausage, help is at hand: the Diaz Coffee Shop offers an impressive sausage selection, from Thuringian to Frankfurter and Nuremberg Bratwurst as well as great coffee and even dark (Bock) and wheat beers. Our overnight stay this time was in a very pleasant Bed & Breakfast.

Flight over the Namib. For many visitors, climbing the world’s largest dune at Sossusvlei is an absolute must but because of the heat, we decided against the desert trip. So as not to miss the petrified forest and the Skeleton Coast, we booked a sightseeing flight, easy to organise from Svakopmund. A bush pilot (who, by the way looked exactly as one would picture him) took us on the 2 ½ hour flight over the Namib in his Cessna pointing out things which can only be seen from the air. At least as impressive as the spectacular dune landscape is the abandoned mine not far from the coast, where, 150 years ago, German adventurers searched for diamonds. During the flight along the coast, the sight of numerous shipwrecks made it clear why this part of Namibia bears the name Skeleton Coast. It is a place of morbid beauty.

Safari in the Etosha pan. A safari in the Etosha Park Nature Reserve is as much a part of a Namibian trip as a visit to the Hofbräuhaus is in Munich. We spent a total of four days in a wonderful lodge just across the park’s eastern border. From here, a driver took us once or twice a day on a 3-4 hour open jeep tour into the park. It’s also possible to drive oneself, but the experienced and very motivated guides simply know better where which animals can be found at what time of the day. So we saw elephants (with babies!), sprinting herds of giraffes, a rhino, lots of antelopes, cheetahs and even one of the extremely elusive leopards. It‘s a very special experience to see a reclining lion just a few feet off the road. Or when you have to come to a complete halt because two pubescent giraffe bulls have decided to have a fight on the path in front of you.

The sky over Namibia. The Etendeka Mountains area has been developed for tourism for less than 20 years, although “developed” would be somewhat of an exaggeration. There are only a few lodges there so for those seeking silence, solitude and an absolutely spectacular, albeit barren, landscape, this is definitely the place. There are mountain elephants and mountain zebras and giraffes running around freely. The ecological Etendeka Mountain Camp, where we were guests, is literally in the middle of nowhere and survives almost completely without electricity and artificial lighting.  The absolute darkness at night reveals a star-studded sky that is unparalleled and all of the stars of the southern hemisphere can be seen in impressive clarity. Shooting stars guaranteed. And very romantic as well!

You don’t have to turn your Namibian vacation into a purely educational trip. However, everything certainly makes more sense and is more fun if you prepare yourself a little for the journey and keep your eyes and ears open while you are there. It is a fact that German is one of the colloquial languages and that Germany, as a former colonial power, has unfortunately left an ignoble legacy behind. Tens of thousands of Hereros were driven into the desert and murdered by their colonial “masters”. The German language is omnipresent here, in inscriptions on old industrial buildings, spoken by the Windhoek-inhabitant who was brought up as a “Youth Pioneer“ in the GDR or on the German-language radio station Funkhaus Namibia from where the Northern German Radio Service‘s “harbour concert“ can be heard live on Saturday afternoons. All the more important then to put it all into perspective. We recommend buying a good travel guide (we did well with the Stefan Loose Namibia Travel Guide) and the reading of Gerhard Seyfried’s excellent novel “Herero” or Lucia Engombe & Peter Hilliges “Child No. 95, my German-African Odyssey”.

Chris is the owner of a PR agency and Carsten works in the field of music management. We are both very busy and professonally, everyone is traveling a lot for themselves. In the meantime, we allways take our time on litte trips together, where the golf bgs should not be missing. Once a year we embark on a great multi-week adventure in places of the world that are still missing on our map. Let yourself be surprised!