On Reunion with a Perfumist

Home of vetiver and vanilla

To be honest, Reunion (French: La Réunion), France’s overseas island located in the Indian Ocean, would not have been on my list of travel destinations. If it wasn’t for Marie Le Febvre. Over the years, the French perfumer, who lives in Berlin with her husband and child, has formed a special bond with the island. Her brother Yann and his Creole wife (Creole being native-born inhabitants) live on the paradise island between Madagascar and Mauritius with their three children. And whenever she can, Marie spends time in her turquoise-colored wooden house on Yann’s property in Saint-Gilles. She has also reinvigorated something on the island that had long been forgotten: the cultivation of vetiver. “Veti… what?” is a question she is asked a lot. People generally haven’t heard of the tropical bunchgrass, which grows between 0.5 and 1.5m tall. Fragrance experts, however, are more than familiar with it: Its essential oil is a popular ingredient in perfumes, because it gives fragrances a deep, citrusy, woody note.

From rainforest to sand beaches

Vetiver originated in Asia (Indonesia, Sri Lanka, South India), but is cultivated in many tropical areas—especially because of its practicality: the tall-growing, hard grass stabilizes the ground against erosions. The roots keep the soil moist and act as detoxifiers, which improves soil quality. The long leaf blades are used in roof thatching like we use reed. Additionally, it is used to make sturdy ropes and as a home remedy for fever and headaches. The fragrant essential oil of highest quality used by perfumers can only be extracted under optimal conditions. When the soil is as fruitful as it is on Reunion. The island offers everything imaginable when it comes to vegetation and climate: from the volcanic inland covered in rainforest to the kilometer-long black sand beaches in L’Etang-Salé-les-Bains on the west coast, or the white sand of Saint Pierre in the southwest. On the island, you can find various microclimates. While the east coast sees a lot of rain, the west coast sometimes has a steppe climate. On the coast, temperatures can reach 30 degrees Celsius during summer (December to March); in higher regions they can sink down to 15 degrees. Fun fact: Since August 2, 2010, the island has been a UNESCO world heritage site. 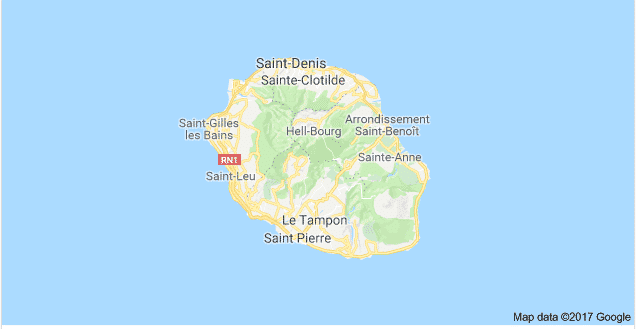 Arriving at the airport of Saint-Denis, the capital in the north with 143,000 residents we experience a modern city with theaters, museums, markets and the old flair of Creole houses. We drive our rental car to the west coast and Saint-Gilles-Les-Bains, a vivid bathing location with lots of restaurants and bars. Surfers enjoy the waves at the beach. But we are drawn to the botanical garden Jardin d’Eden in the southern part of the city. The garden is indeed a green paradise of 2.5 hectares, with 700 different kinds of tropical trees, plants and spices. Observant vistors will discover chameleons among the leaves. However, you will never come across a dodo, the island’s mascot that can be found on t-shirts, souvenirs and on the label of a native beer brand. The animal that resembles a pelican supposedly existed, but has now been extinct for ages.

By helicopter over volcanos and hidden villages

We fly our helicopter over gaping canyons with raging waterfalls to the Piton des Neiges, an inactive volcano (3070 meters), with a peak usually covered by mist. The island was created when the volcano rose up from the Indian Ocean about 3 million years ago. Nowadays, it’s a popular rock-climbing area.  Another climbable, yet active volcano: the Piton de la Fournaise (2631 meters), the island’s landmark. With more than one eruption a year, the volcano is one of the most active in the world, attracting large numbers of tourists. We fly over Mafate and the other two calderas Salazie and Cilaos, called cirques due to their round shape. Mafate is so remote that you can only reach it by foot or by aircraft. “It is called the valley of ten villages. Only 1000 people live there. Building material needs to be delivered by helicopter. It takes two hours and a steep climb to get to the next bus station,” Marie says. One of the most beautiful sights on Reunion is the breathtaking panoramic view of the Cap Noir on the northwest edge of the Cirque des Mafate. It is only accessible via a hike through several climbing passages. Hiking boots and outdoor clothing are essential due to ever-changing weather conditions. But it’s worth the effort. At Helilagon, you can choose between five different helicopter tours.

Ever heard of chayote?

Taking a rental car around the island, you come across sugar cane plantations almost everywhere. The woody plant is made into the famous brown sugar, a sticky syrup or into rum. Many of the larger and smaller sugar cane factories offer facility tours. Bourbon vanilla, the most expensive spice after saffron, also comes from Reunion. The island used to be called Ile Bourbon. Since 1850, tonnes of the best vanilla is exported. The plant is actually an orchid, the only edible plant of its kind. It climbs its way up on other regular trees, but is particular when it comes to light, moisture, temperature and shade. Every single blossom is inseminated by hand and carries only one bean. You can find all other harvested delicacies at the market in the small resort village Saint-Gilles-Les-Bains: mangoes, pineapples, lychees, chillies, tamarinds, palm hearts or the typical green gourd chouchou or chayote. It is eaten raw and cooked. The dried stems are used for flip flops, hats and bags; in July, a three-day-celebration of the chayote takes place at the Cirque de Salazie.

In the south of the island, in the area surrounding Saint-Joseph, dry and rainy days are in a perfect balance. This is the only place where vetiver extraction works the way that Marie Le Febvre loves it: dark and simultaneously smelling of fresh grapefruit. The way that no laboratory could synthetically create it. “Vetiver has always been my favorite scent,” the perfumer says. When I asked her why, she answered me with a counter question: “Why do you like pasta?” Even though vetiver was virtually nonexistent for decades on Reunion, the fragrance was always available. Java and especially Haiti produce it in large quantities on larger fields and with a cheaper workforce for cosmetic giants such as L’Oréal, who buy great amounts of it. While it is cheaper in those places, the essence has a different aroma; it is earthier, smokier. “The extraction of vetiver oil from the roots is complicated and requires many people for planting and harvesting,” Monsieur Laurent of the C.A.H.E.B. says. That’s why they only harvest during the summer, distilling with the centuries-old method of steam and pressure. It takes twelve hours to extract the thick, brown oil. 100 kilos of roots are required to make about two to three kilos of essence, which equals a field of 12,000 square meters. The C.A.H.E.B. produces not only essential oils from vetiver, but also vanilla, geranium, roses and other plants.

A fragrance build on Vetiver

When Marie first contacted the distiller to tell him about her plan to plant vetiver, he merely laughed. He had given up that business years ago, when the vetiver prices plummeted and couldn’t compete with the mass production of the competition elsewhere. But the perfumer did not back down. Now the price for a kilo has risen back up to 800 euros, and with “Vetiver Réunion”, Marie has launched the sixth fragrance of her “Urban Scents” collection. Le Febre: “With this scent, I have fulfilled my dream of creating a feminine vetiver scent with a hint of a masculine attitude. Until now, the scent has usually been used in perfume targeted towards men.” The fragrance she created builds on vetiver itself, which is unusual. Pink pepper, guaiac wood and bergamot are included to perfect the scent. Compared to her colleagues, Marie loves using only a few ingredients. “Because I think that especially a natural ingredient is already a perfume in itself.” She adds that of course synthetic scents also have their purpose. “I use them, too. For example, to highlight the facets of a natural substance.” And some scents such as musk are strictly synthetic now. “It’s all a matter of balance,” she says. “Of course, a fragrance smells more synthetic when it doesn’t have any natural ingredients. But without synthetic molecules, it will just smell like the nineteenth century.”