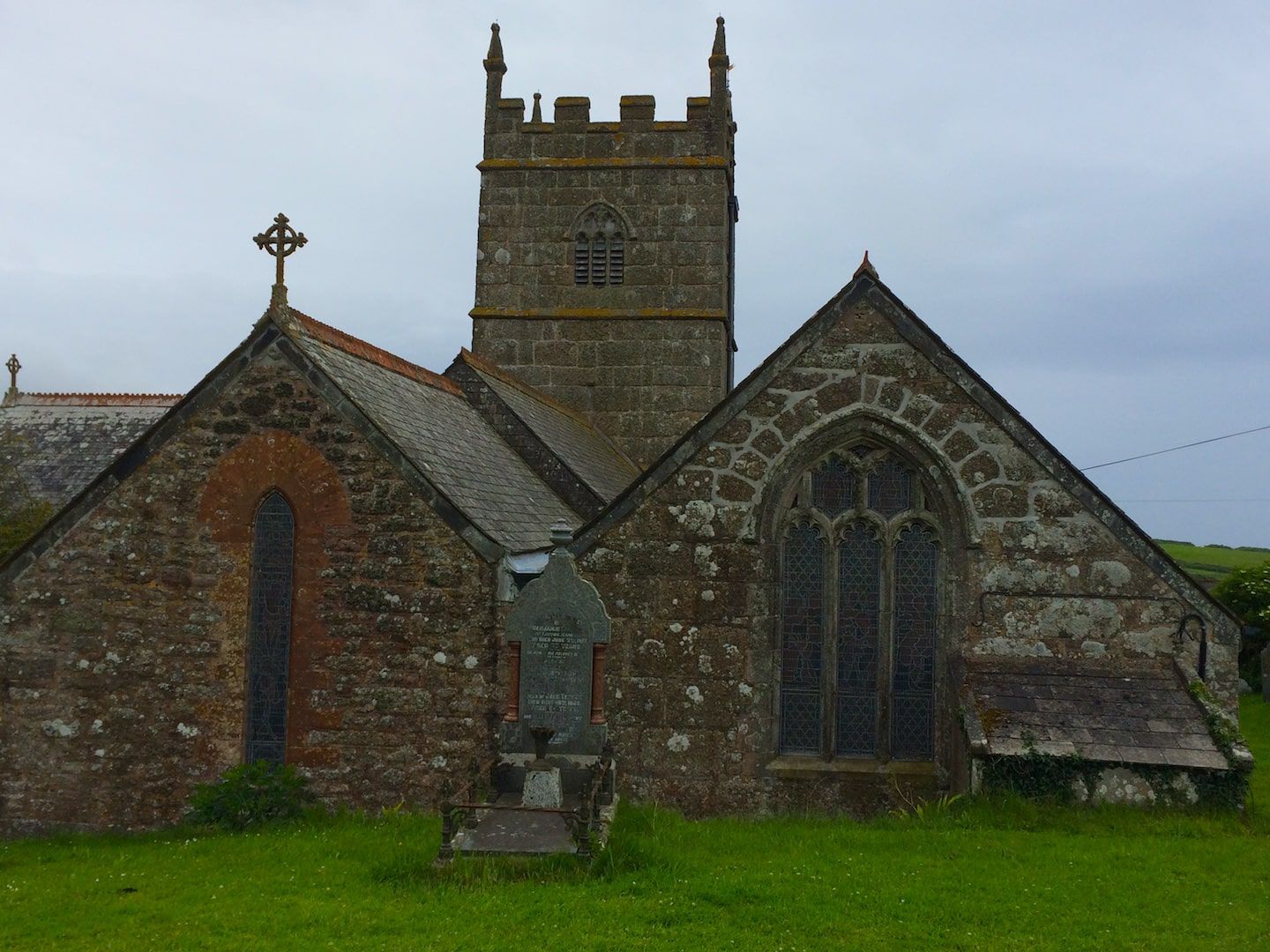 Without Rosamunde Pilcher, but with genuine English weather

Attention! Spoiler ahead – there is no such thing as an aristocratic land- and manor owner in disguise whom you will meet in a pub introducing himself as a struggling artist. Nor are there perpetually blue skies that squeeze themselves insistently into every scene of a Rosamunde Pilcher film. But let’s start from the beginning. In June 2016 my friend and loyal travel companion Margit and I decided to go on a girls’ trip. At the top of our list this time: Cornwall – the picturesque Southwest End of England which is often used in romantic film scenes – also known as the British Riviera. Why should we wait until our retirement if the time is now, we have holidays and the just reached Brexit decision has flushed the pound right into our pockets (not that there is anything else positive to be said about Brexit. Except that it’s an ice breaker to get into conversations).

How we planned our trip

We started planning the road trip. Time period: one week. Starting point: Düsseldorf, my home town. On our work list: the ferry from Calais to Dover to see the incredible chalk cliffs of Dover, after that Stonehenge, the most mystical place of Europe. Then the first over-night stay in Bath to continue our travel to Cornwall. The rest we left to chance and booked strategically located bed and breakfasts in advance to be able to explore Cornwall in our set time period. Little hint: Airbnb wasn’t helpful or cheaper this time, apartments were partly offered at 150 British Pounds a night. In fact we booked all our accommodations through travel portals such as booking.com.

Through the narrow streets of Cornwall

So we started early in the morning in Düsseldorf. According to our calculations, we should reach the ferry after approximately four hours and catch the last guided tour in Stonehenge between 6 and 7 p.m. To be on the safe side, we booked the tickets for Stonehenge, as well as the ferry, online.
Note for culture lovers: for 36 pounds you can buy a 9-day heritage pass. This gives you free access to over 100 sights, which might be worthwhile in Cornwall with all its manors, castles and museums.Another note for drivers: As nice as a road trip might sound, the narrow streets of Cornwall are difficult to maneuver, and you might only be able to back-up with the help of friendly pedestrians, in case of a tourist bus blocking the street. Therefore, it is better to park in the parking lots outside for a fee and walk through the towns. You also need a lot of patience on the country roads and you should plan to use additional time to get from one point to the next, since you won’t be able to exceed 50-60 km/h. Therefore, pull over from time to time, enjoy the scenery and go with the flow.

Five must-see places in Cornwall and South England, with perhaps one exception

1. Stonehenge: Our calculations added up and we arrived at the legendary place at 6 p.m. on the dot. The stone formations of Stonehenge could already be spotted from the road from time to time. Exhausted, but impressed, we approached the UNESCO World Heritage site, the over 5,000-year-old stone circles, about whose origin and purpose many myths and theories exist. Even if you have seen the mighty formations on TV or in Asterix in Britain x times – when you actually stand in front of them, it is an unforgettable experience. And it didn’t matter that it was raining the proverbial cats and dogs. An advantage was that queues were limited.

2. Bath: We continued a few kilometers towards Bath and had our first overnight stay at the stately Tracy Park. The hotel, which is preferred by ambitious golfers, was our most expensive stay, but the cottage style manor and its superb restaurant in the knight room were worth it. The stables now including the hotel rooms allegedly inspired the British author Anne Sewell to write her novel Black Beauty. We visited the historical center of the Roman city Bath on the next day. Its city landmark is ashlar „Bath Stone“, which is excavated in the vicinity. We are crazy about the sweet alleys and the typical English shops with occasional quirky window decorations and small cafes in backyards. We skipped visiting the Roman baths after seeing the line of visitors, which is comparable to the line of the Sistine Chapel in Rome. Another little hint: if you want to help yourself to a scone or a lemon cake in one of the lovely street cafes, you should eat it quickly and advisably in one gulp. Otherwise the seagulls might eat it for you! An accurate nosedive and half of our cake was gone and the cappuccino on our clothes instead in our cups.

3. Port Isaac: The most picturesque place in our opinion is the tiny Port Isaac, which is wedged into the narrow cove between high cliffs. At tide, you have a pastoral sight of fisher boats lying in the sand. In contrast, the promenade is very busy. Pubs, restaurants having fresh fish on their menu and offering something for every purse. From here, you can book short or extensive cliff hikes, where you can really enjoy the fantastic and impressive coast of South England. Note for the right accommodations: we had booked a wonderful bed and breakfast in Port Isaac the Longcross Hotel & Garden. After the long journey, we were rewarded with a delicious dinner and a breathtaking sunset.

4. St. Ives: Our anticipation was tremendous as we continued to St. Ives, a famous artist colony and the probably most popular holiday resort of Cornwall. The author Virginia Woolf spent several summers of her childhood there and dedicated her novel Jacob’s Room to the place. Rosamunde Pilcher’s The Shell Seekers plays there. She grew up nearby and has been living in Cornwall ever since. We came to realize that her romantic pictures and scenes of her films definitely don’t take place in St. Ives, since the original flair cannot be felt due to all the tourist buses, Cornish ice cream and food stands. For this reason, we fled to the various galleries and visited the Barbara Hepworth Museum with its sculpture garden giving us shelter in all this hustle and bustle. We sat on a small bench letting the sun give us warmth (which we unfortunately haven’t encountered often). Finding the right accommodations: A real stroke of luck was our second cottage. A pearl in the midst of the hilly landscape. The Sweet Water Trout Farm is a small bed and breakfast, where the owner invites you into her own kitchen. Whoever wants their own bathroom has to ask for it, otherwise you share the bathroom with the guests of another room. We roam through the huge property and discover three sweet water lakes in which formerly trouts were bred. Nowadays, beautiful and lush water lilies grow on them. Nature lovers and Instagram fans get their money’s worth.

5. Land’s End: Like everybody else, we were drawn to the famous look point Land’s End, the westernmost part of England, even though we were warned that it is more or less a commercial amusement park event. Unfortunately, that is exactly what it was. So, we recommend walking along the coast either left of right of Land’s End, since the public right of way is untouchable and therefore still free of charge.

Five things that you should eat in Cornwall

Even if England is not known for its culinary refinement there are some highlights that should be tested. Attention: The English kitchen is not for diet fanatics!

1. Scones with clotted cream and strawberry jam: On our way to Port Isaac, we stopped at a pretty ugly tearoom that caught our attention from the street. Crochet curtains in the windows, wax cloths on the tables, fake flower arrangements and bric-a-brac everywhere. We ordered a traditional tea-time, consisting of a tea pot and two scones. The pastry without crust, comparable to a milk roll, is baked to a fluffy roll with the help of a lot of butter. These are served with the famous Cornish clotted cream and homemade strawberry jam. I’m saving my comment on the nutritional value of this meal at this point. Otherwise you would most probably never try it. But it is an incredibly delicious sin.

2. Cornish Icecream: Like clotted cream, the Cornish ice cream is a patented product of the Cornwall and Devon milk industry. In the respective places, like the fisher and artist village St. Ives, we counted no less than 15 ice cream parlors and stalls. We went for a seagull-safe place and shared only one ball of ice cream, to avoid the danger of not fitting into our regular dress size anymore.

3. Cornish Pasty: We encountered various shacks and stalls that offered Cornish pasty. We had to google first to find out that this is a randomly stuffed pasty. We decided to go for the traditional version with beef, potato, turnip and onion. It was so-so, but maybe it would have been better to try another combination. You should try it anyhow.

4. Fish & Chips: I know it doesn’t get more stereotypical than this. But where should you eat fish and chips, if not on the coast of the little fishermen villages? In Port Isaac, several food trucks and little food stands tempt you with the English national dish. Rick Stein, the British star chef, even made it socially acceptable and opened a regional fish and chips restaurant.

5. Seafood at Rick Stein: Which brings us to the culinary highlight of our trip. The gourmet restaurant of the British TV cook Rick Stein is also located in Padstow. With a glass of Australian Chardonnay (which we picked, like typical girls, because of the nice label), we enjoyed crab meat with hot Indonesian sauce and Dover sole. Delicious and really affordable for a gourmet restaurant.
Especially charming: contrary to the stiff and high-priced restaurants in Germany, the English take things easy. Most of the guests were dressed casually and chat happily and carefree, as well as the staff.

To sum up our trip: We got to know and love a much edgier Cornwall, where we neither met manor owners nor princes. It should be mentioned that we were not looking for either. If you are, it would be better to book one of the various Rosamunde Pilcher Tours. We will always remember the friendliness and the unique humor of the English with whom we talked during breakfast about God, the world and naturally „the Brexit“.

I am a graduated historian and journalist. Time ago I worked fulltime as journalist, since a few years I have dedicated myself to the beauty industry. However, the love of writing and traveling has remained. To connect the beautiful aspects of life, I just continue to do both. A little bit „culture“, a little bit „cream“ and always a dose of curiosity in the luggage – let‘s go the wild ride.