Written by Melanie Rüdiger on 13. February 2021. Posted in Culture. 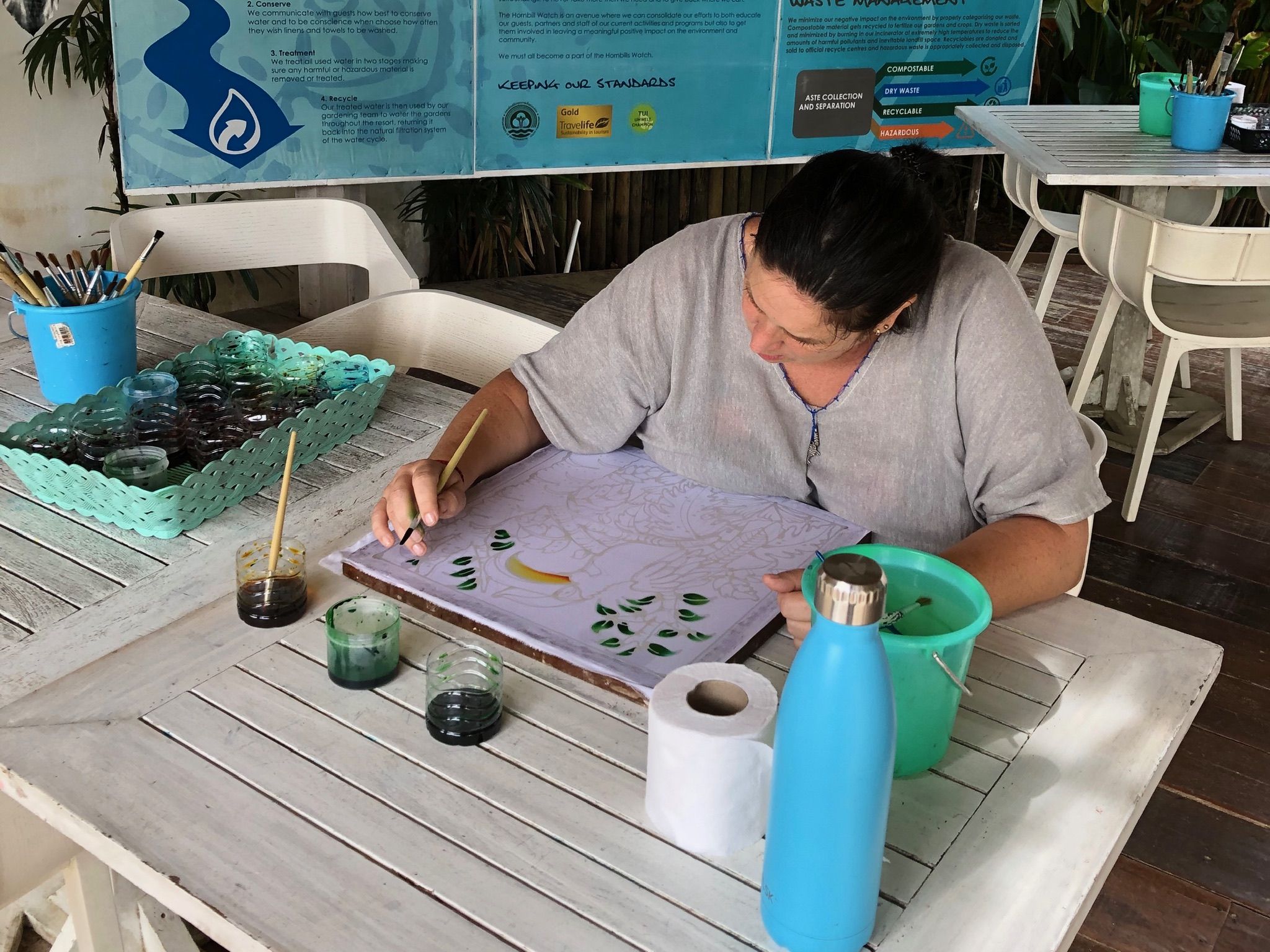 Hardly anyone today knows that batik is an ancient textile dyeing technique and its patterns originally looked anything but wild and colourful. Moreover, batik fabrics were reserved exclusively for the clothing of the aristocracy. The techniques are just as different as the appearance of batik textiles. C&C author Melanie Rüdiger, who lives in Thailand where batik is widely used, has tried one of them.

Admittedly, Batik was not on top of the list of things I have always wanted to try, despite its temporary hip factor. When I think of batik I think of rainbow-coloured, psychedelic patterns, and clothes of backpackers and old hippies. In fact, batik textiles became known in the Western world mainly through the Woodstock icons’ colourful clothing. Batik experiences a revival in fashion at regular intervals, and in recent years (even) the German Vogue occasionally dedicates an article to it.

Wearing batik is a duty for Thai officials

Batik clothing is immensely popular in Thailand and many of its neighbouring countries. Young Asian designers are currently rediscovering the old technique and bringing it to the catwalk in unusual cuts. The women’s sarongs, worn like skirts, usually show traditional floral or geometric patterns, of which you cannot tell that they were made in a batik process. One day a week, public servants and schoolchildren wear batik uniforms. In Southern Thailand these are mostly shirts in bright colours with a somewhat naive painted hem of underwater worlds or tropical landscapes. In Malaysia, wearing batik clothing on pre-determined days is even prescribed by law for officials to promote the batik industry and awareness of the cultural heritage. At many airlines in Southeast Asia you can see the flight attendants wear uniforms made from batik textiles.

Batik supposedly comes from Indonesia, more precisely from the island of Java, where until 1940 wearing clothes from batik fabrics was exclusively reserved to the aristocracy. Batiks are also known from other continents, such as Peru and many African countries. Batik has been used on Java for more than 1400 years. “mbatik” means “to write with wax”. In Japan, there is a similar technique called “shibori,” whose colours and patterns are usually more muted and geometric. Indonesian batik has been on UNESCO’s “Representative List of the Intangible Cultural Heritage of Humanity” since 2009. Via the Strait of Malacca, the technique probably came to Southern Thailand. Batik is said to have a healing, relaxing effect, like the painting of mandalas.

On a multi-day tour to the highlights of the Thai island of Koh Yao Noi, located in the Phang Nga Bay near James Bond Island, we visit a women’s group that produces batik and offers workshops for tourists. The women tell us that some of them learned the craft from previous generations. However, production and marketing took off only after the Boxing Day Tsunami in 2004, when the provincial administrations of the affected regions provided know-how and materials as a self-help tool. The women produce both clothing with “psychedelic patterns” in tie-dye technique and hand-painted sarongs with regional motifs such as the island panorama and native flowers or animals.

My batik teacher is deaf and cannot speak

Being offered a batik workshop in our Paradise holiday resort on the island, I decide to give the whole thing a chance and try out batik painting. Loh, my local teacher, is deaf and cannot speak. Although people with disabilities are fully integrated into Thai society, they often do not receive any support, at least in rural areas. He can hardly read and write, with Thai, as a tonal language, probably not being easy to learn without hearing. Therefore, it was a great opportunity for Loh to study the batik techniques with the women’s group in the village and thus find an employment with the hotel.

At the beginning he shows me some templates that are painted on plywood and hung up in the pavilion, as well as plenty of examples on his mobile phone. There are T-shirts, sarongs, and other clothing to choose from. But I decide for a picture with an oriental pied hornbill, the signature bird of Koh Yao Noi. Loh begins to sketch the motif with a pencil on a thin cotton fabric, which is already glued to a wooden frame with wax. He then uses the canting, a small brass vessel with a handle that contains liquid wax, to trace the pre-drawn lines as if he is drawing with a pen holder. The pencil lines serve as rough outlines only. He draws all the details which later should remain white with wax. He is done in a few minutes. During the break, until it is my turn, Loh creates two simpler motifs with fish and seahorses for a family with a toddler. Starting with the first leaf, he shows me how to paint a gradient from light to dark with only one colour: The lighter end of the leaf is moistened with water, on the desired darker one he applies the colour. Both parts are blurred with the finger. The technique is similar to silk painting, except that the batik fabric is usually moistened before applying the dye, and the cotton fabric probably forgives mistakes rather than silk.

Then it is my turn. There are different pre-mixed dye concentrations, and each container holds its own brush. Formerly, the colour powder was made from natural materials, but today it is mostly produced chemically. All leaves on the picture represent plants from the immediate surroundings. If I do not exactly recognize which ones he meant, Loh points them out in the garden. While I´m painting, getting more and more into a meditative flow, Loh explains to another couple how to tie-dye a scarf. Depending on the desired pattern, the fabric is folded into a small package and tied. The more accurately folded and the tighter it gets tied, the pattern becomes more geometric. Instead of dipping the fabric in the dye, the colours are simply applied with a brush. Loh carefully checks that each fold is sufficiently impregnated with paint.

After two hours of painting leaves and branches, I am deeply relaxed, but tired as well. Therefore, I ask Loh to give the hornbill its characteristic appearance and he is done with it within a few minutes. All that’s left for me is to colour the background. Loh will later remove the wax by soaking the cloth in hot water and apply a fixing liquid. Before we say goodbye, he shows me photos of his own works of art, which give me an idea that he is a lot more talented than just to help tourists with painting holiday memories. They are life-sized paintings, rock-style, that he sells in a gallery on Phuket. The next day I pick up my own work at the reception. I will frame it and hang it up at home – as a memory of Koh Yao Noi and the very talented deaf-mute artist Loh.

You want to learn more about the art of batik? The Book of Mary Taylor “The Art of Batik: Flowers and Landscapes” could be interesting for you