Written by Margit Rüdiger on 3. November 2019. Posted in Culture. 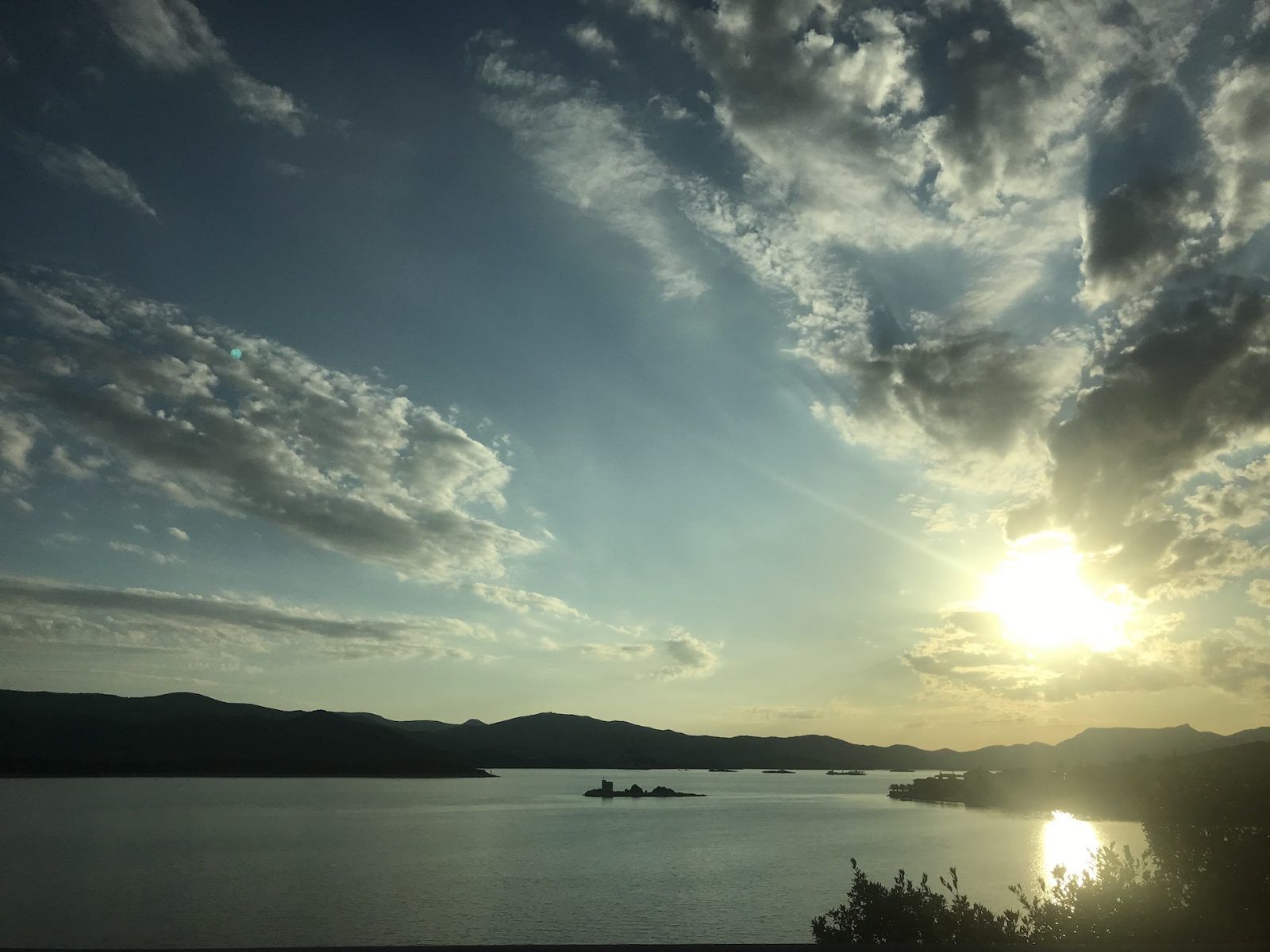 After visiting Slovenia, another Balkan region, Croatia, with a side-trip to Montenegro, was on my travel agenda this summer.

The Dalmatian coast, with its many small bays, rugged rock formations and the green-blue Adriatic sea, is stunningly beautiful. Countless islands dot the waters just off the almost 400-kilometer-long coastline. The back country, in contrast, is as monotonous as the coastal landscape is impressive. After hours of meandering past wide valley meadows, rocky, scrub-covered hills, the occasional lone cypress and a few scattered villages, we decide to stick to the coastal roads. It’s difficult to get around in Croatia without a car, especially if you want to drive the back roads and not only to the next bay or nearest city. There are buses and they do have timetables, but this these are rarely adhered to and standing room in the overcrowded public transport is the norm. So rent a car – a small one is will do just nicely. On foot we check out all of the local rental companies in Dubrovnik, where our flight from Munich had landed the previous day. Ultimately we find what we are looking for at Sixt, which offers the most reasonable rates (275 € per week incl. insurance). Now we’re independent and mobile. By the way: Although it is part of the EU, the means of payment in Croatia is still the national currency (Kuna) as opposed to neighbouring Montenegro. It’s worth noting that since the mostly two-lane coastal roads are narrow and winding, journeys by car can take quite a bit longer than distances in kilometers would suggest.

Hotels and their Star Ratings

It pays to do a lot of research before choosing a hotel. Unless you’ve booked into a luxury chain such as the Hilton or Radisson, the star ratings aren’t much to go on. We opted for a four-star hotel in Zaton, about 9 kms from Dubrovnik. A big mistake! There was no minibar in the room and if, as was the case three times that week, the group of Chinese guests had attacked the buffet like a swarm of locusts by 7 a.m., there was no (at the best of times very meager) breakfast either. Things improved after a chat with the manager but even then, for a week we felt like we were in a training camp for hotel staff: Please try to clean the bathroom floor without leaving a smeary film; please replace the used up shower gel and soap (there was nothing else anyway), and in the mornings, no riding up and down in the lift with the staff on their various cleaning days. Right of way is normally the privilege of the guests! But the pool on the roof offered a fabulous 360-degree panoramic view. And the small restaurant in the nearby bay of Zaton, run by the family grandmother was a blessing: friendly people (as almost everywhere else in the country), good quality, moderate prices. The latter is unfortunately not the case everywhere. In a snack bar on Stradun, the main boulevard of Dubrovnik’s old town, we paid the equivalent of 30 euros for an espresso, a soy latte, a Coke Zero and water!

The Old Town of Dubrovnik

… is a must for all visitors to Croatia. It is, however, also a must for the three to four cruise ships that anchor here every day. Finding the right time to visit is important, and this is usually in the afternoon, when most cruise guests have to be back on board. The massive, over 1,9-kilometer-long city wall was completed in the 16th century and is considered to be one of the greatest monuments to peace in Europe. For centuries it protected its inhabitants and more recently served as a backdrop for King’s Landing in the TV production “Game of Thrones”. There are even “Game of Thrones” excursions through the city, including a cruise on the “Karaka“, the ship used in the series. The tour visits the various film locations and the fan shop where one can pose for a photograph on the Iron Throne. The architectural styles of the well-preserved buildings are varied, ranging from the Baroque church of St. Blasius to the Renaissance style of the Sponza Palace and the Gothic Rector’s Palace, a historical museum today. Most shops and restaurants can be found in the limestone pedestrian zone Stradun or Placa. The best view of the Adriatic coast is from Mount Srđ, at 405 metres actually more of a hill. The trip to the top takes 4 minutes by the cable car which was built in 1969. Just like the old town, the offshore island Lokrum is a UNESCO Cultural Heritage site. Not only a nature reserve, the island is the scene of many stories and legends, and it is said that Richard the Lionheart stranded here in 1192 after his ship went down. The island can be reached by boat from the old harbour in Dubrovnik in 15 minutes.

In contrast to the rather turbulent and bustling Dubrovnik, Cavtat, a mere 20 kilometers to the south and with only 2015 residents, is an ideal place to relax and swim. The picturesque little town, set on the tree-covered hill of the Rat peninsula, nestles among Mediterranean evergreen pines and cypresses. There are over seven kilometers of shallow coastline, with crystal clear water, sandy beaches and coves. In addition to the beautiful but more basic types of accommodation, new hotel complexes and luxury houses have now sprung up along the coast. Many yachts head for Cavtat where the administrative centre of the municipality of Konavle, with its own harbour captain and customs dock, is located.

Via Cavtat we continue along the Adriatic coast into Montenegro (in Montenegrin: Crna Gora), the smallest of the former Yugoslavian Republics: Rugged mountains, narrow beaches and medieval villages. It’s no wonder that Montenegro was chosen as the main setting for 2006’s “Casino Royale”, the 21st James Bond movie. It has also been the world’s first declared environmental state since 1991. But this miniature Republic on the Adria has long since ceased to be an insider tip. We bypass the capital Podgorica and the newly built Porto Montenegro, where super-rich investors set the tone, and visit the bay of Kotor instead. We are in luck and it isn’t too crowded. The scenery puts one in mind of a Norwegian fjord with many churches and fortified towns. Off the coast of the charming little town Perast lies the man-made islet of Our Lady of the Rocks. The Catholic Church, built in 1452, houses impressive masterpieces by Montenegrin and Italian artists. It is a traditional place of pilgrimage where, even to this day, seafarers come to pray to for a safe passage home. The secluded Durmitor National Park in northern Montenegro, with its bears and wolves, glacial lakes and the 1300-metre deep Tara Gorge is a breathtaking experience.

For those who haven’t yet visited the Great Wall of China, the “Ston Wall” is quite an impressive sight. Extending to a length of 5 ½ kilometers over the mountain, it ranks as the second largest preserved defensive fortification in the world after China’s famous wall. The small medieval town of Ston (approx. 2500 inhabitants) is located on the Pelješac peninsula in southern Croatia. Its history dates back to the 14th century, when the monumental stone wall was erected by the Dubrovnik Republic. It served to protect the salt mines and to maintain complete control of access to the peninsula. The quiet, narrow streets, historical monuments and landmarks such as Napoleon Street and the world’s oldest active salt marshes are definitely worth a visit. Not forgetting, of course, the traditional cuisine of the area with seafood specialties from the region’s own oyster beds and the local wine.

Relax in the Arboretum

The Arboretum Trsteno, hidden away about 18 kilometers northwest of Dubrovnik in southern Croatia is a haven of peace and quiet far away from the all of the hustle and bustle. This unique park, which houses a large variety of plants from around the globe and the oldest collection of exotic trees and plants in the country, is taken care of by the Croatian Academy of Science and Arts. The 28-hectare area is divided into different units: a Renaissance garden with a summer residence, a neo-romantic park from the 19th and 20th centuries, a historical olive grove and natural forest vegetation. In 1494, at the time of the Renaissance, the summer residence of the philosopher and politician Ivan Marinov Gucetic-Gozze was located in Trsteno.

Back to the big city

We go through passport control at the Bosnia-Herzegovina border to return to Croatia and its second largest city Split. Split is renowned for its beaches and although summers here are hot, the autumn weather was pleasant and ideal for bathing in the still- warm sea. The spacious promenade is reminiscent of the Promenade des Anglais in Nice and the city centre is dominated by the fortress-like complex of the Diocletian’s Palace. Built in the 4th century by the Roman Emperor Diocletian, it incorporated thousands of buildings in its heyday. Even today the ruin still encompasses more than 200 different structures. It’s fun to take a stroll within the white stone walls, to visit the cathedral and inner courtyards, browse through shops or simply relax in one of the many cafés, bars or restaurants.