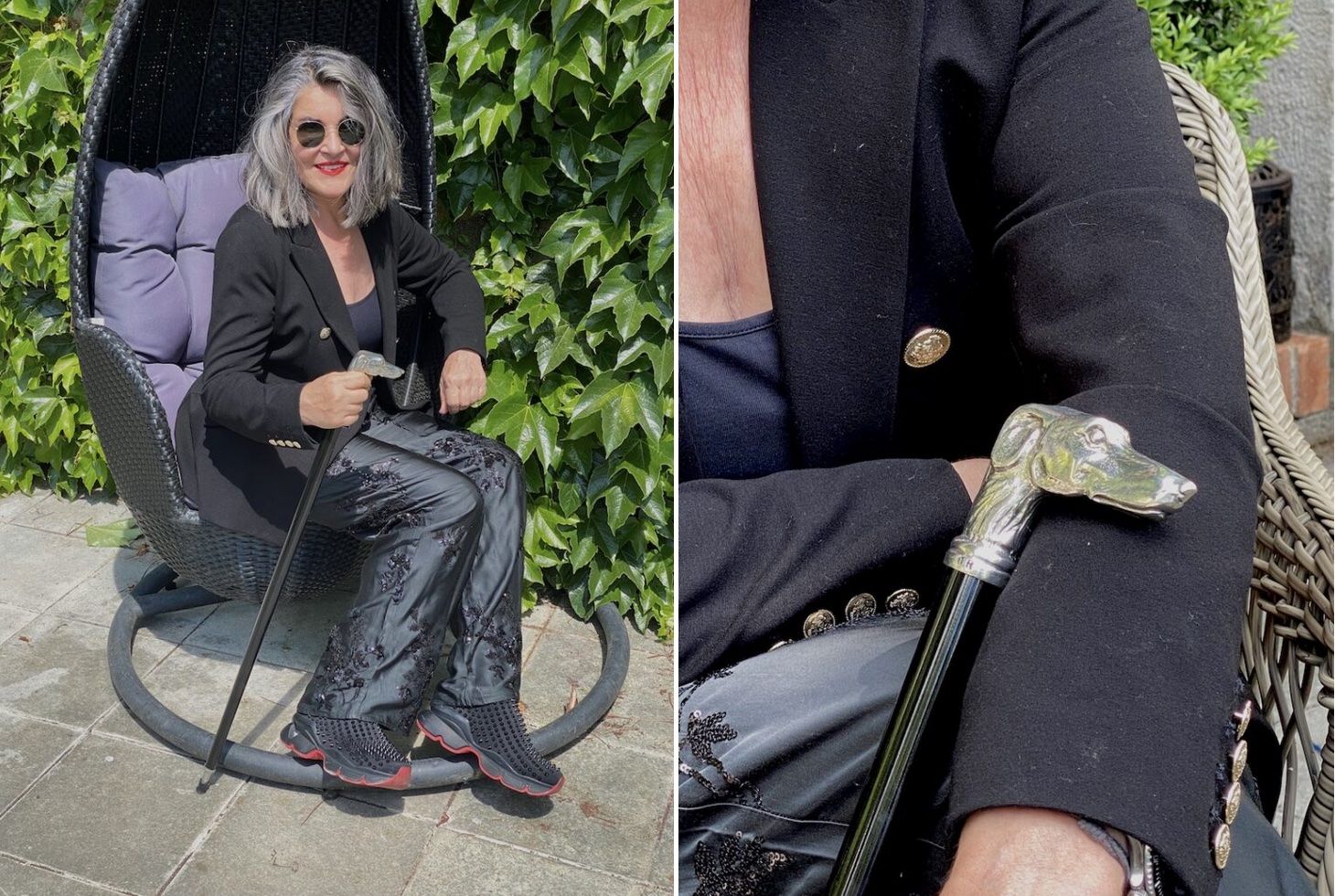 I will never forget the memory of standing by my younger sister’s crib when she was five years old. I felt so incredibly sorry for her when she cried out of desperation because she couldn’t kick. I didn’t understand why the adults allowed such a thing. The little one lay in a plaster shell covered with gray felt. Her legs were turned outwards and fixed with leather straps. My little sister had a congenital hip joint dysplasia, i.e. the joint socket is too small or not deep enough, so that the femoral head of the thigh does not lie firmly in it.

At that time, I had no idea that I had also been born with this problem, which is hereditary and mainly affects female offspring. It was not until much later that the dysplasia became noticeable in me. Why did it remain undetected for so long? I have done a lot of extreme sports all my life. That’s why my muscles were so strongly developed that they were able to compensate for the birth defect for decades.

At some point I had pain in the groin area from time to time. Physical therapists treated the trochanter. This is a muscle that attaches from the inside of the sacrum outward to the lateral bony prominence of the femur (thigh bone). An orthopedist, in turn, tapped the lumbar spine and sclerosed nerves in my lower back – extremely painful because only possible without anesthesia. When the pain in my leg became stronger again, I called him and often had myself injected fit for a flight – I had to travel a lot for work.

When the pain remained

It is about three years when the pain became more and more severe. I needed painkillers all the time. I went to see a well-known orthopedics professor in Munich, whom a friend recommended. The MRI was clear. Dysplasia of both hip joints, left worse than right. He said that surgery and an artificial hip joint were inevitable at some point. For me a horrible idea, so we decided to delay the operation and to fight the pain conventionally for the time being. With an autologous blood injection. Long since a standard procedure.

For this procedure, venous blood is taken and PRP (Platelet Rich Plasma), as also used in aesthetic medicine for the so-called vampire face lift, is extracted from it. When mixed with hyaluronic acid, the growth factors contained in the blood plasma are injected directly into the hip joint to reduce bone-on-bone friction. It worked. After six injections, I was pain-free. I was overjoyed.

Everything went well for almost three years. I was able to walk and do sports without any problems. However, when an acquaintance, herself a doctor, asked me at the beginning of this year while we were walking the dog together whether I had problems with my hip, I realized that my gait had changed. I went to see an orthopedic surgeon friend and asked him to try the autologous blood therapy again. This time it did not help. On May 10, I could barely walk, was in extreme pain. Another MRT was done. This time the diagnosis was clear: the left hip had to be replaced asap.

Wanted: the surgent of confidence

It’s not that easy to find the right surgeon. Not only should he be technically good, the chemistry must also be right. My orthopedist offered me the prospect of three colleagues who would perform the operation minimally invasively – that is, without cutting the muscle. One professor, who he said was excellent in his field but difficult as a person, I immediately crossed off my list. Number 2 was sympathetic to me at first sight. Competent, natural, unagitated. No demigod in white. Further examinations followed, and the date for the artificial hip was set for the end of June.

Because I wanted to know exactly what replacement part I would be carrying in my body in the future, the doctor showed me a sample of the implant: it consists of a titanium shaft, sheathed at the lower end with hydroxyapatite, as is also used for dental bone reconstruction. The stem is inserted into the femur and the ceramic rod end is attached to it, which sits in a socket also lined with ceramic. He explained that ceramic is an extremely wear-resistant material, which prevents loosening.

The waiting time until the operation seems endless to me. Constant pain, constantly new and stronger painkillers in ever higher doses because the weaker ones no longer help. Every few hours I have to take a tablet to prevent the pain memory from manifesting itself. If all else fails, I have an opinoid, a synthetic substance with morphine-like properties. However, it is so strong that I can only take it at night at best. It dulls the pain, but shoots me up so much that I am completely foggy during the day and can’t write or drive.

Stylish with a gothic stick

Despite medication, I actually always have pain of varying severity. Some days they are so severe in the morning that I can’t get up to take my dog Byron for his early morning walk. Then my husband has to step in. Sometimes it works if I use a stick to help. Black with a silver dog’s head for a handle. I still have it from a gothic costume party and never thought I would need it in everyday life.

I had to order the crutches in yellow for the first weeks in the clinic and rehab from the medical supply store. For the dreary occasion, I wanted neither the black nor the gray ones in stock, but at least a sunny color. At the moment the yellow crutches are still in the corner waiting to be used. My surgeon said that I should take them before the operation to get in the right mood for what will happen afterwards. But somehow I am reluctant to do that. I think it’s coming soon enough for me. If you can’t walk properly and especially not quite upright, you already feel miserable, but to demonstrate that on crutches… No thanks, I’d rather walk stylishly on a gothic cane.

The worst thing for me is that I suffer extremely from the lack of exercise. Despite eating little, because I have little appetite, I have gained three kilos. As I said, I can no longer take long walks with the dog, otherwise we walked at least eight kilometers every day. I can’t go to the gym anymore, and I can’t even relax in the evenings with my yoga rituals. The pills make me so tired anyway that I fall into bed completely exhausted by 10 p.m. at the latest. In the meantime, I am longing for the surgery date to finally get rid of this disastrous pain.