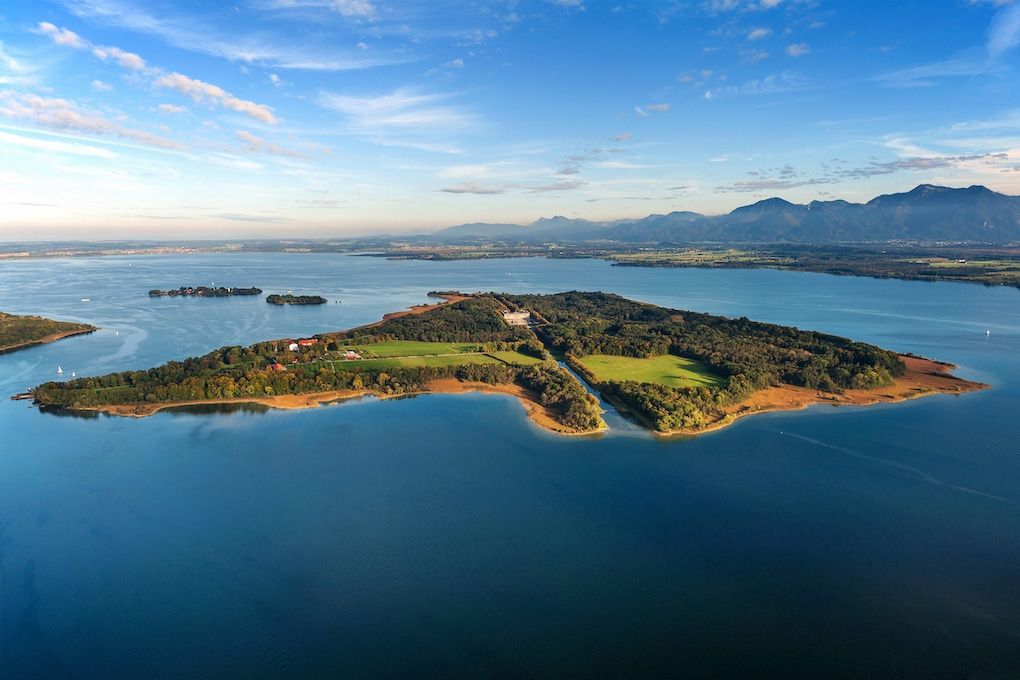 Visit lake Chiemsee. Some places in the world are like movie sets: surreal and particularly impressive. This includes the tranquil region of Chiemgau in Upper Bavaria with its opulent Herrenchiemsee Castle.

However, all that gold, exquisite marble and luxurious stucco are not the brainchild of a Hollywood director, but owed to the not entirely uncontroversial fairy-tale king Ludwig II of Bavaria. He acquired the island in the middle of Lake Chiemsee in the 19th century as a residence and had the stately New Herrenchiemsee Palace built there.

Unlike the French original – Versailles Palace – the imposing building is surrounded by water. It is located in the middle of Lake Chiemsee on Herreninsel, where neither cars nor bicycles are allowed. The journey is therefore exclusively by boat, for example from the pier in Prien am Chiemsee. This makes a visit to the magnificent building a unique experience, especially since you can even get there by horse-drawn carriage instead of on foot..

This is open almost all year round for guided tours. In summer, you can also enjoy exclusive evening events outside the regular visiting hours, such as the Herrenchiemsee Festival in the impressive Hall of Mirrors!

Another seasonal and charming spectacle is a ride on the historic steam streetcar from the pier to the Prien train station. The two-kilometer ride in the green vehicle from 1887 takes you past nice little cafés, beautiful old house facades and modern boutiques.

If you want to continue listening to the waves of Lake Chiemsee and still live centrally, you should stay at the Yachthotel. The four-star hotel is close to the town center of Prien and yet away from the hustle and bustle, surrounded by woods and meadows. A large sunbathing lawn, two restaurants, a spa with indoor pool and direct access to the lake make the hotel an ideal place for those seeking peace and quiet.

Due to its idyllic location, the yacht hotel is also a good starting point for hiking and biking tours as well as cultural excursions, for example to the nearby gallery in the old town hall of Prien, where you can admire the naturalistic art of the Chiemsee painters as well as special exhibitions.

Also worth a visit: the small village of Aschau in Chiemgau. Just under half an hour’s drive from Prien amt Lake Chiemsee, this climatic health resort has its own castle, a picturesque landscape and one of Germany’s most prominent chefs. Heinz Winkler, whose fine cuisine has been awarded two stars by the Michelin Guide for several years, creates delicious dishes in his eponymous residence.

Luxury in Aschau: the Residence Winkler

There, surrounded by elegant murals, opulent carpets and fine marble décor, the former head chef of Munich’s legendary Tantris restaurant celebrates classics and new creations. On request, there is a wine accompaniment from the in-house cellar, which comprises a proud 950 items or 25,000 bottles.

You should not miss the bar of the star restaurant with direct access to the panoramic terrace. The view of the Kampenwand and Hohenaschau Castle is truly hard to top.

And those who want to fall into bed on foot after an extensive meal with the two-star chef, complete with digestif at the bar, can book one of the almost 30 rooms at the Heinz Winkler Residence. These are furnished similarly to the Venetian gourmet restaurant: elegant, dignified, comfortable. Particularly spacious: the chic garden suites, which extend over two floors.

A highlight is also the regular two-day cooking course by and with Heinz Winkler. To get you in the mood, there’s a five-course gala dinner, and the next day, after breakfast, you cook, chop and taste together with the professional at the stove.

The cozy Chiemgau just has to offer some exciting personalities and local features to discover.