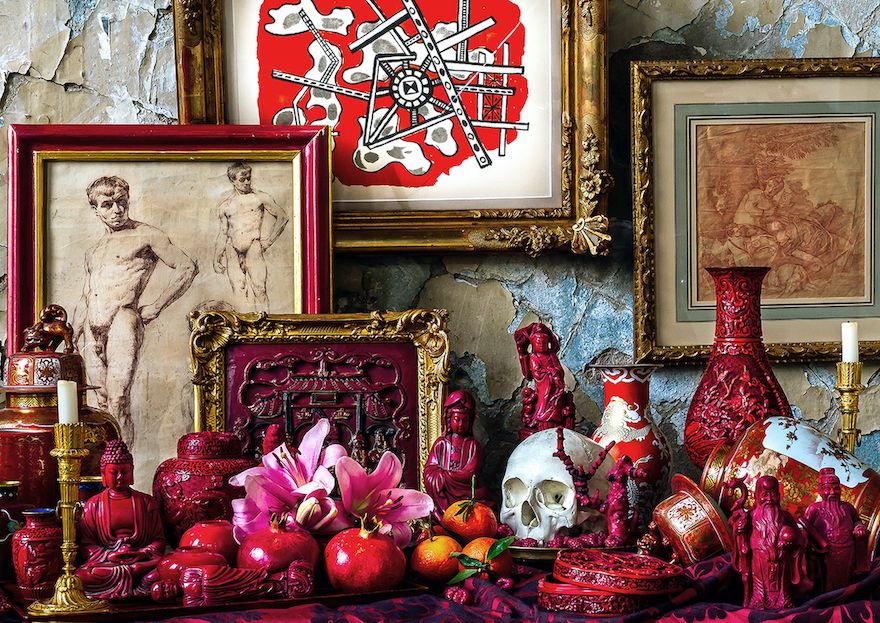 The large format pictures of photo artist Markus Rock are anything but nice and pleasing compositions. His oeuvre, he has already shown on many international exhibitions like the NordArt, is provocative and thought-provoking.

Markus Rock’s photographic work centres on the question of what it means to be human in contemporary society. His earlier series show de-contextualised naked female and male bodies floating on black surfaces. The prints confront us with different states of individual being. But they also thematise the universal human longing for intimate and meaningful relationships. The physicality of the human body, the images suggest, is the landscape into which such searches for and struggles over human identity and selfhood – individual and collective — are inscribed. The ultra-realistic aesthetics of Rock’s photography can be deeply unsettling because the boundary between the body’s reality and its representations is kept open, porous and undefined. The powerful drama of human life is there for us to see and we are inescapably drawn right into it, complicit in the construction of ‘the Other’. The struggles of fellow human beings for dignity and recognition, Rock’s powerful images remind us, are always part of our own.

In his most recent work Markus Rock continues his visual exploration into what it means to be human in today’s world. He is particularly interested in what role material culture plays in who we think we are. Is there a meaning to the physical world that goes beyond its materiality, its mere use value? Rock is inspired by the old genre of vanitas still-lives which first emerged during the Golden Age of Dutch and Flemish culture in the 16th and 17th century. Decorating the parlours of the burgeoning merchant and bourgeois classes such meticulously arranged and amazingly realistic paintings aimed to show off the wealth of the patrons. They also celebrated the then growing stress on worldly accomplishments and human abilities: colourful paintings carefully combined the precious, rare and exceptional produced by the arts and to be found in nature with the pleasures of the mundane: flowers, bread, cheese, fruits and vegetables, books, jewels, golden and silver wine-filled chalices, scientific objects, maps, mirrors, Venetian glass, Chinese porcelain, silver cutlery, Indian cloth and Turkish carpets. Such opulent paintings were – and still are – a material feast for the eyes. Some of the objects there depicted, however, such as the hourglass and even more importantly the human skull, drove home another profound, if invisible, philosophical message: all is vanity, they reminded the viewer, and thus pointed to the transience and brevity of human life as well as to the shallowness of all human pleasures, of power, beauty and wealth. All material things and personal achievements amassed during your own life time, the painting warned, are insignificant. The essence of your being is your immaterial eternal soul granted to you by God. Such profound Christian beliefs led the still-live paintings to ooze in symbolism and to depict allegorical compositions in which every element had a deeper, hidden meaning to be deciphered by the pious onlooker. It was only at first sight that a vanitas painting celebrated worldly goods, possessions and human abilities. Their exuberant materiality ultimately aimed to take the viewer beyond the shallow materiality of the physical world onto a spiritual journey to encounter and explore the mysteries of the human condition, and renew one’s faith in the love and power of the Almighty.

Meanings of being human

The peculiar double-meaning of such early modern paintings radiates a unique aesthetics which inspires Rock’s carefully staged 12 vanitas photographs, all of which are immersed in dark atmosphere. But he gives this old genre a fresh meaning. Each of the pictures juxtaposes a skull with a carefully composed scenery of familiar objects used in our contemporary consumerist culture and many of these compositions carry a significant dose of satire. Arrangements such as the ‘conversation’ of the human skull with an empty and seemingly hastily thrown-away bag of crisps or the assembly of battered-looking plastic toys are humorous and even funny. But they don’t make you laugh full-heartedly. One cannot help wondering what it means to be human in our throw-away global consumerist culture. What are we as humans if all we produce is trash? What is left of the faith in human dignity and unique abilities so cherished by our early modern ancestors if human knowledge today is reduced to quick visual searches on the web to be downloaded by everyone onto a cheap electronic device? Is the human skull still a meaningful reference to human mortality at the time when the cognitive life sciences are promising us to soon be able to unlock the mysterious of eternal life in our brain chemistry? What is left of the earthly pleasures such as delicious foodstuff if consumed in a haste from plastic containers? Does the material world really have no deeper meaning to us than its immediate use value? Rock’s vanitas images celebrate the pleasures of sight but, simultaneously, they also leave us deeply unsettled: meanings are emptied, plastic consumerism seems to take their place and the shock of a global trash culture lingers in one’s mind. One is left with the old question: who am I in all of this?

About: Markus Rock was born 1962 in Solingen/Germany. He started his career as a makeup artist, stylist and produktion designer, before he became a photographer himself. For 25 years he worked in San Francisco, Munich, Paris and Barcelona for a variety of international customers as Vivienne Westwood, Harper’s Bazaar, Madame, Levis, MTV and Sony Music. Since 2008 Berlin is the center of his life. https://up-n-co.com/