Written by Margit Rüdiger on 3. July 2019. Posted in Culture. 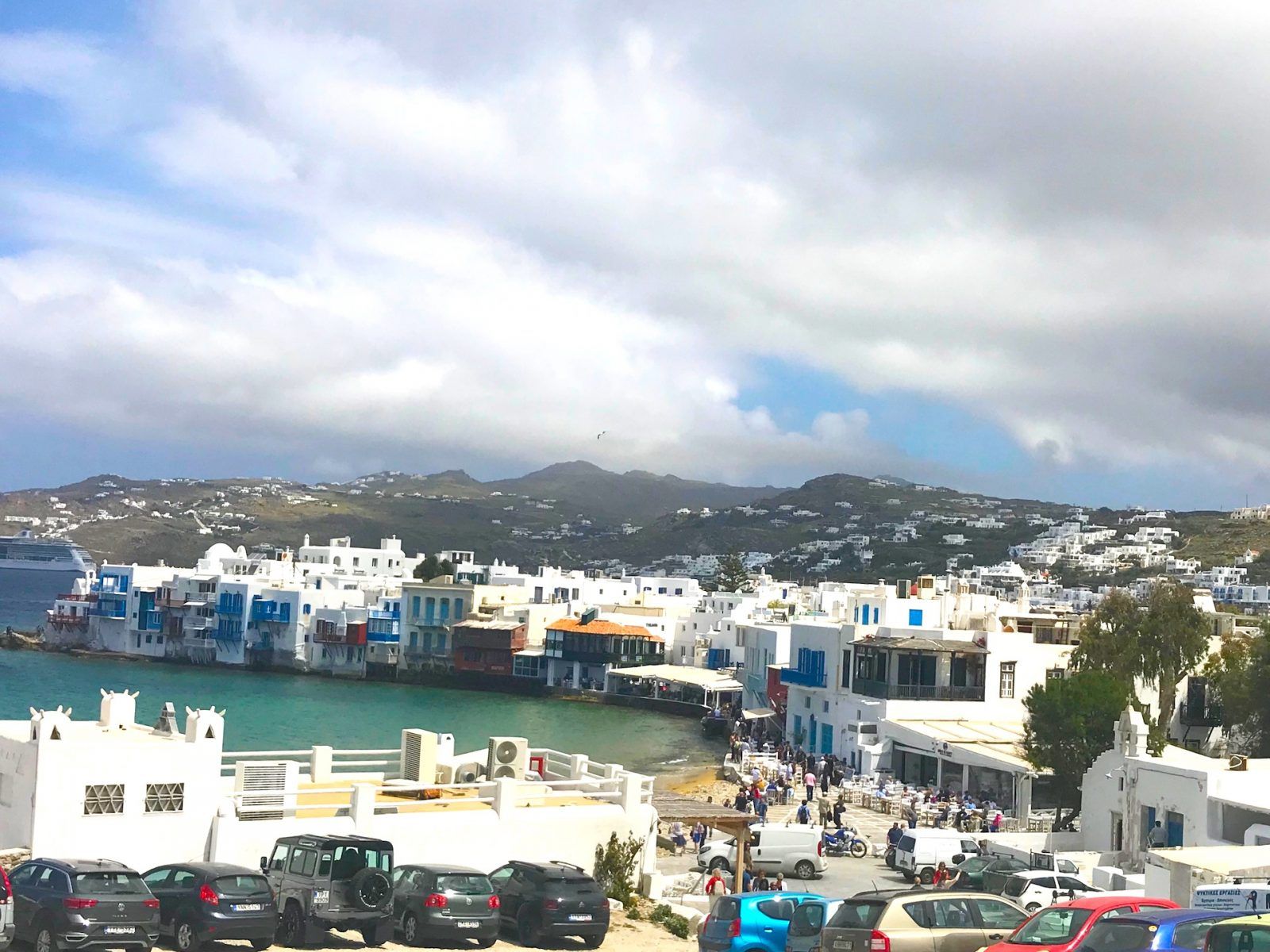 So near and yet so far. Only 40 minutes by ferry separate the two Aegean islands. But the difference couldn’t be greater.

The modern Bohemian hustle and bustle of old and new hippies. Party till dawn. That’s what I’ve always heard about the island. But there are two distinct sides to Mykonos and by that I mean Mykonos Town. Chora is the name given by the Mykonites to a central place. During the day the city shines in the glistening white of the Cycladic houses and the dazzling blue of the sea. It feels as if I’m seeing real light for the first time, that’s how blinded I am. There’s a good reason why one shop after the other here sells sunglasses!
Shopping in Mykonos is a lot of fun anyway. Be sure to visit Dimitris Halvatzis (#dimitrishalvatzis) and Mykonos Sandals. The narrow cobbled uphill and downhill streets are a labyrinth where visitors just love to get lost. Waiting around every corner is a new pretty shop, a cute restaurant or one of the countless mini churches. The squares with their restaurants, bars and cafés are often no bigger than a postage stamp. The edges of the houses are marshmallow round. Dresses, shoes, scarves and bags are trimmed with pom-poms. Everything is so cute that you can hardly describe anything without using words like sweet or pretty. This applies to Little Venice as well, a little gem with Venetian-style terraces and wooden balconies, overlooking the sea. A view of the famous white windmills, the landmark of the island, comes along the 5 Euro cup of cappuccino. For almost 400 years, all the grain was ground in the ten 16th century Kato Mili, of which five have been preserved. One of them now houses a museum.
While the town is a bustling hive of activity during the day, it puts on its most glamourous face after sunset. Chains of lights twinkle everywhere, often strung between palm trees and bougainvilleas. The sun sinks into the sea in theatrical redness. And the starry sky – nowhere else could it be more beautiful. The clientele, mostly young, beautiful, hetero or gay – but above all well-heeled – glitters just as brightly. Up to 10 Euros for a beer is not uncommon. The most pleasant thing about all the hustle and bustle: the Mykonites take everything with relaxed friendliness and unshakeable tolerance, at the same time making one thing very clear: they are and remain the boss in the house. Charming and very congenial!

Delos: Peace and Culture
From the old harbour in Mykonos – the new harbour is the territory of the cruise ships which drop anchor here daily – my journey into the past begins. The ferry crossing takes 40 minutes. Hordes of passengers, a horror in the summer months, are disgorged from the Delos Cruiser “Orca” onto the flat island, which appears to float just like a raft in the sea. But the crowds disperse quickly, and the Antiquity adventure can begin. We are speaking about the period of 300-500 BC when 30,000 people from different nations lived in four larger settlements on the island. Many things began here, the beautiful and the less beautiful. The main square, for example, was the scene of the first slave market which saw 2000 people being sold every day. Nothing on today’s Delos has been changed, rebuilt or restored as is the case in many other ancient places. Small shops lined the way to the Amphitheatre, the first of its kind. The stone formations and artefacts still give evidence of their former use: the trough tables of the fishmongers, the butchers’ blocks and the holes in the Bank’s stone counter into which money was dropped. The island’s wealth is said to have been unique. Trade and culture flourished. A place that pays tribute to its deities. And indeed, it is here where Leto, the beloved of Zeus, found a safe haven after her escape from the angry Hera. Her two children, Apollo and Artemis were born here and as a thank you, she promised the island eternity. It is a remarkable fact that Delos, in comparison with other archaeological sites, has indeed managed to keep its history alive.