Written by Melanie Rüdiger on 26. November 2022. Posted in Culture. 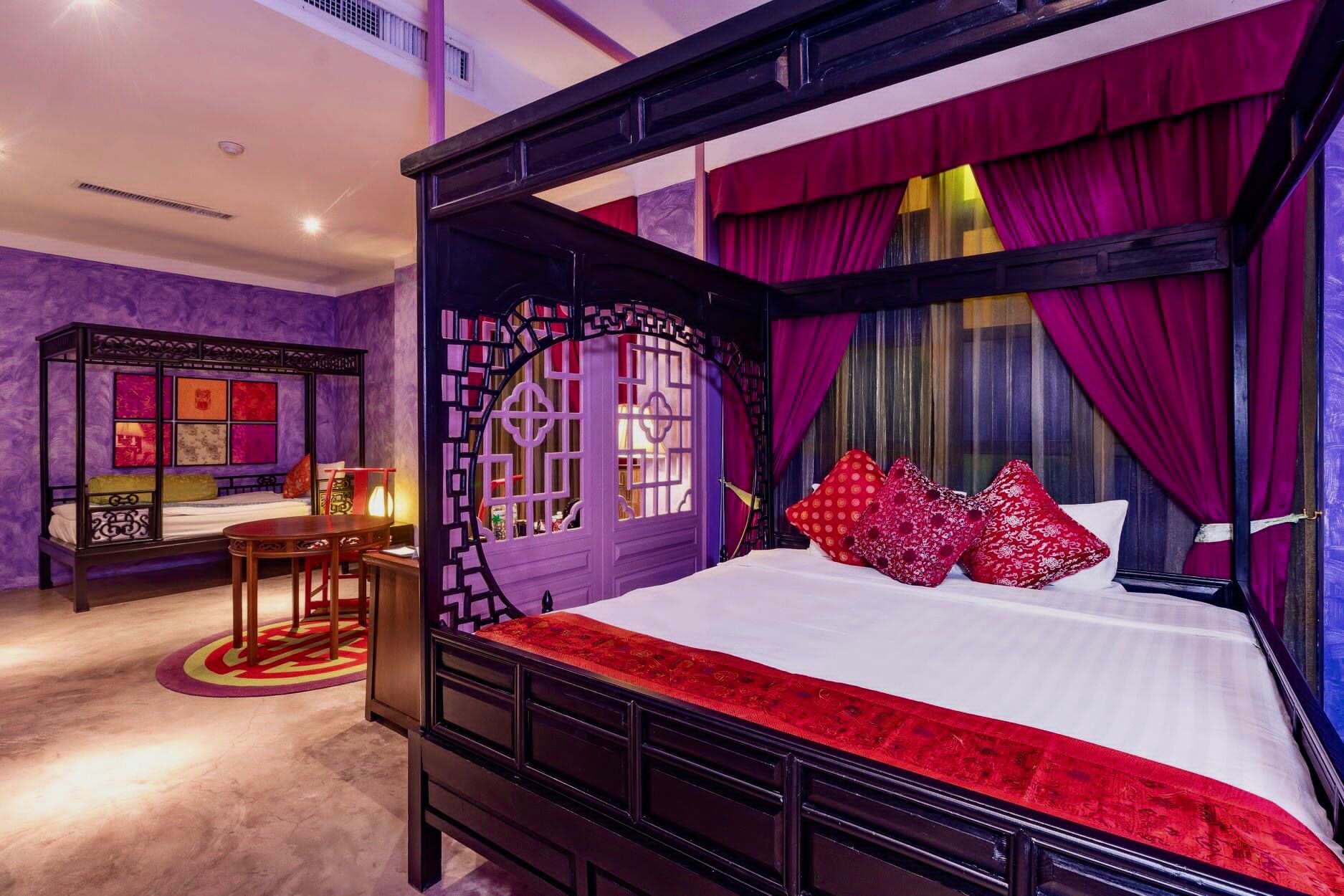 “When the taxi drops us off at the entrance of the Shanghai Mansion hotel, we are a little surprised to find ourselves in front of an open bar, whose two-story side wall is completely painted with colorful, expressionistic street scenes”, says Melanie Rüdiger. “The first guests are already enjoying their cool afternoon beer to soft lounge music. However, there is no sign of a reception desk.”

A huge modern chandelier hangs from the center of the room. We enter the bar of the Shanghai Mansion and discover a narrow bridge with red painted railings on the side. It leads deeper into the building over a pond with several fat koi swimming in it and countless red paper lanterns above it. At the end of a mysteriously gloomy corridor, we are greeted by an oversized painting of a Chinese woman dressed in red, which, despite her innocent expression, evokes associations with an opium den.

Behind it we finally find the lobby. Here, too, it is rather dark, the room dominated by a large wall clock à la Big Ben, illuminated from behind. Despite the noble, all-black furnishings and the opulent fabrics, I’m a bit disappointed by the entrance, as I’ve seen completely different pictures on the internet…

In the heart of Chinatown

Since I fell in love with the pictures of the Shanghai Mansion’s interior when I booked the room, I didn’t think twice about the hotel’s location in Bangkok. The city is so huge that I rarely end up in the same area twice anyway. Coincidentally, Shanghai Mansion is located in the heart of Chinatown, on Yaowarat Road, recently named one of the “10 coolest streets in the world” by Time Out magazine. The newly opened “Potong”, tucked away in Chinatown, is considered one of the best recommendations in town.

Founded more than 200 years ago, Bangkok’s Chinatown is considered the world’s oldest community of Chinese outside of China. The area is experiencing a new boom since the Metro was extended to the old town around the Royal Palace in 2019. Chinese temples and shrines are ubiquitous – the 1658 Leng Buai La Shrine is not only the oldest Chinese temple in Bangkok, but possibly the oldest in all of Thailand – with huge dragon motifs, shops full of traditional Chinese remedies and dried plants whose uses are not readily apparent.

There are street art galleries, but also dark, motor-oil-smelling corners where car dismantlers hang out. It feels more like Hong Kong than Thailand’s capital when the colorful neon signs with mostly Chinese characters light up at night, street kitchens display their glazed ducks, and restaurants serve specialties like shark fin soup and bird’s nest soup, the “caviar of the East”.

During the day the street is a busy thoroughfare with the usual Bangkok mix of taxis, buses, tuk-tuks and motorbikes, but at night it fills with hundreds of pedestrians. Most of them are locals who crowd around the tiny tables of the street vendors. Right in front of the hotel entrance, a chestnut vendor sets up his stall every night, and right next to him you can get freshly roasted skewers from a huge selection. Except for Mondays, when almost everything is closed and the sale of street food, massages and the like is prohibited. On this day, everything is thoroughly cleaned.

Shanghai Mansion is perfectly located for exploring Bangkok. The nearest subway station is not far away and the old Hua Lamphong Railway Station is also within walking distance. It’s easiest to take a tuk-tuk to the nearest pier on the Chao Praya River and cross the river to Bangkok’s most fashionable megamall, ICONSIAM. More than can be explored in a single visit, it boasts 11 floors of everything from budget brand chains to high-end luxury labels, including a floating market and indoor waterfall.

Shanghai Mansion – „Oasis in the City“

As we make our way from the front desk to our rooms, the serene coolness and silence of the hotel is an almost sacred contrast to the hustle and bustle outside. One floor above the lobby, we finally come face to face with the sight that had magically drawn me in on the Internet – a four-story Zen courtyard surrounded by verandas and centered on an elongated, shallow water garden filled with fish and greenery, with colorful bamboo lanterns filling the airspace above. The Zen garden of the Shanghai Mansion not only creates a uniquely contemplative atmosphere.

According to the owners, the Burasari Group, which operates four hotels in Thailand (in Bangkok and Phuket) and one in Laos, one of their goals is to provide a cooler environment in all of their properties, including water features, with a target of 3°C below the outside temperature, to offer guests an “oasis in the city.” The verandas in front of the rooms and suites are furnished with an impressive collection of antique furniture, inlaid gaming tables, display cases full of Chinese vases, all on loan, making it feel more like being invited to a friend’s “mansion” than a hotel.

All the rooms have signs with Chinese names like “Prosperity”, “Happiness” and “Success” – at least for those who know Chinese. When the bellboy opens the double wooden door to our room, the first thing I see is a huge freestanding bathtub through a transparent room divider, a standard feature in all but the cheapest room category. The color red dominates the room, contrasted by an iridescent green silk brocade wall and opulent velvet and brocade fabrics. A painting of another Chinese woman and a chandelier dominate the room. A feast for the senses; the journey back in time to the previous century has definitely succeeded.

Built in 1892 as a trading house, the Shanghai Mansion was transformed in 1908 into Bangkok’s first Chinese opera house, attended by Thai royalty and aristocracy. For a time in the mid-19th century, it was used as a stock exchange and textile trading center, and later as a department store with restaurants and Chinese herbal medicine shops. It even served as a McDonald’s branch before being rescued from decay by the Burasari Group and reopened in its current glory as the Shanghai Mansion in 2008 after extensive restoration. Since then, it has undergone regular maintenance to keep it safe and up to standard.

Due to the depth of the building, most of the rooms in the Shanghai Mansion do not have real windows. This may take some getting used to, but our “Ying Hua Deluxe Room” has a satinized, non-opening window through which the sun wakes us in the morning. On the opposite side, facing the atrium, is a large window draped with heavy velvet curtains. This is where we have our little tea ceremony every day, and with the view of the atrium, it feels a bit like being in a theater box.

Chinese ceremonies in the ballroom

Although the atrium appears to be flooded with light, it is not topped by a glass roof, but rather by the hotel’s impressive ballroom, which specializes in Chinese engagement, wedding and tea ceremonies. We were lucky enough to witness an engagement ceremony by the “Lucky Fish Pond,” which gave a hint of the hotel’s illustrious opera house past.

The hotel’s own “Spa Burasari”, with its coconut oil-based skin care line, also enjoys an excellent reputation, and is visited more often by external guests than by hotel guests. Unfortunately, it was booked up quickly, and since I chose a Monday for my visit, I was only able to take a quick peek at the rooms behind the stained glass and the spa menu.

In the Asian tradition, all treatments begin with a footbath in warm water infused with mint, tea tree oil, kaffir lime, and ground lemongrass. A salt scrub increases circulation. Another highlight is the Rice Force Treatment Oil, made from the finest white Japanese rice. The oil is considered an absolute skin beautifier. It has moisturizing properties, is a powerful antioxidant and evens out the complexion. I am definitely going to visit it the next time I am in Bangkok.