Written by Corinna von Bassewitz on 9. April 2022. Posted in Culture. 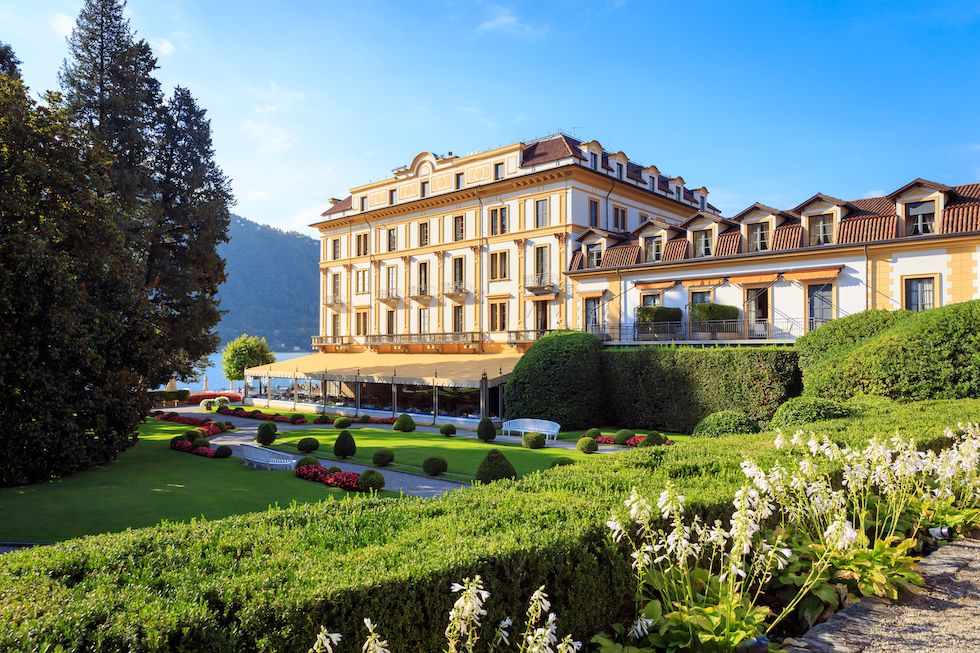 It was seven years ago when I first visited the Grand Hotel Villa D’Este in Cernobbio on Lake Como. It became a place of yearning for me.

At that time I had accepted an invitation from the BMW Group Classic, which has organised a unique show together with the hotel every May since 2005: the “Concorso d’Eleganza”, probably the most extravagant presentation of classic cars in the world. The setting was perfect. The lake glistened in sunshine, the magnificent house, a palace, in yellow and white with high columns and stone balconies provided the backdrop. I sat on the terrace, directly on the water, and let the Bugattis, Ferraris, Porsches, BMWs and Fords of past eras pass by me. They were driven by ladies and gentlemen who were dressed in the style of the 20s, 30s or 70s according to the vintage of their cars. I don’t remember the details. But I do remember the villa, which I did not enter that afternoon, but which nevertheless became a place of yearning.

The builder was a cardinal

n 1568, Cardinal Tolomeo Gallio had architect Pellegrino de’ Pellegrini build a villa on the shores of Lake Como, grandiose with perfect proportions, intended as a meeting place for literati, musicians and artists of his time. For about 200 years, the villa, then called Garrovo, was owned by the Gallio family. The subsequent owners were a motley crew: from a playboy from Milan, who bequeathed the property to his widow, a former ballerina at La Scala in Milan, to Caroline of Brunswick, England’s uncrowned queen, who gave the house the name “Villa D’Este”. Finally, in 1873, a couple of Milanese businessmen bought the property and rededicated it into the luxury hotel it still is today.

The synonym of luxury is splendor

And it is seen everywhere in this wonderful property: in the 10-hectare Renaissance gardens, where a 500-year-old plane tree reigns over the flowerbeds along with numerous statues; in the entrance hall with tall columns of white marble, by the mighty crystal chandeliers, the works of old masters on the wall, by the only swimming pool in the world that floats on a lake and the temple-like complex, which is decorated with mosaic stones and is one of the most photographed buildings beyond the Colosseum in Rome.

My gaze falls on the mosaics as I stand on the balcony of my room, an exuberantly appointed space with a princess bed, a velvet couch and a honey-colored marble bathroom. None of the 152 rooms in the main villa and the Queen’s Palace look the same, either in size, décor or color scheme. The brocade and the silk and the furniture, much of it made by Lombard artisans: Places like the “Villa d’Este” are ambassadors of Italian style.

You don’t have to open the window to know where you are. Every winter, when the hotel is closed, every room, every piece of furniture and every carpet is cleaned; repaired, replaced and painted. If the wall color in the suites changes, regular guests are sent pictures of it. Many people are already the fourth generation to come to the house on Lake Como.

A palace of the senses

Villa Cima, not far from the entrance gate, is very special. Located on the shores of the lake, the house was built in 1814 by Caroline of Brunswick, Princess of Wales and later briefly Queen of England, on the grounds of Villa d’Este to accommodate Count and Countess Pino, the villa’s former owners.
The accommodation in this stately 650m² residence is spread over three floors. Again, no two rooms are alike and each is furnished with antiques and works of art. The views from the balconies are simply breathtaking. A private terrace offers guests the perfect opportunity to dine al fresco while admiring the incomparable beauty of Lake Como.

Hideaway in the park

Villa Garrovo was built in 1833 and completely renovated in 2015. It is located in the hotel’s park and offers both garden and lake views, just a few steps away from the Cardinal building. Covering an area of 700 m², the villa offers a spacious living room with large windows overlooking the lake, a fully equipped kitchen, 6 bedrooms with marble bathrooms spread over three floors, and a multifunctional room (gym and relaxation room). Two special features of the villa are the bright veranda that opens onto the hidden garden where guests can relax and be among themselves, and a second terrace with a large patio totalling 60 square metres.

A little castle in itself

Built in 1860, Villa Malakoff takes its name from one of the fortresses around Sebastopol, captured by the French General MacMahon. Situated on a small hill within the grounds of the Villa d’Este, it offers a magnificent view of Lake Como and is a place where one feels sublime. The rooms are spread over 3 floors and offer 300 square metres of living space. A stay at Villa Malakoff offers the best of both worlds: a private home with four bedrooms, and at the same time all the amenities and comforts offered by the Villa d’Este Group’s first-class service.

In one of the most spectacular spots of Villa d’Este’s park, amidst the enchanted Mosaic Garden and Nymphaeum, stands the Mosaic House. Recently restored, with access to the private courtyard, it comprises 90m² of living space. There is a wonderfully traditional furnished living area, a one-bedroom suite, a spacious marble bathroom, and a guest bathroom. The world-famous mosaic garden is a highlight, and here at the latest it becomes clear why the “Villa d’Este” is one of the “Leading Hotels of The World”. A dreamlike set-up for weddings with a magical backdrop.

In the baroque beauty on Lake Como, there are more staff than guests. People notice that. The first time they come because of the good reputation, later because of the good service. Although the staff is seasonal, there is only a low turnover. Most of the staff and the guests are part of the story. Like George Clooney, who owns a property on Lake Como only half an hour away by boat. The actor and his wife Amal are regular guests at the Grill Restaurant above the Floating Pool.

My personal highlight was the best zabaglione of my life. I sat in the wonderful Veranda Restaurant with its huge picture window that can be lowered on balmy nights. The decor there is retro 70s and I remembered the days when every halfway decent Italian restaurant in Germany still served a zabaglione for dessert. This wonderful dish of egg yolk, sugar and Marsala whipped up in a copper bowl. The maître d’ had overheard my request and he rolled up a trolley with a rechaud, copper bowl and whisk and created the frothy dream just for me. We don’t have it? There is no such thing at Villa d’Este. I’ll be back.