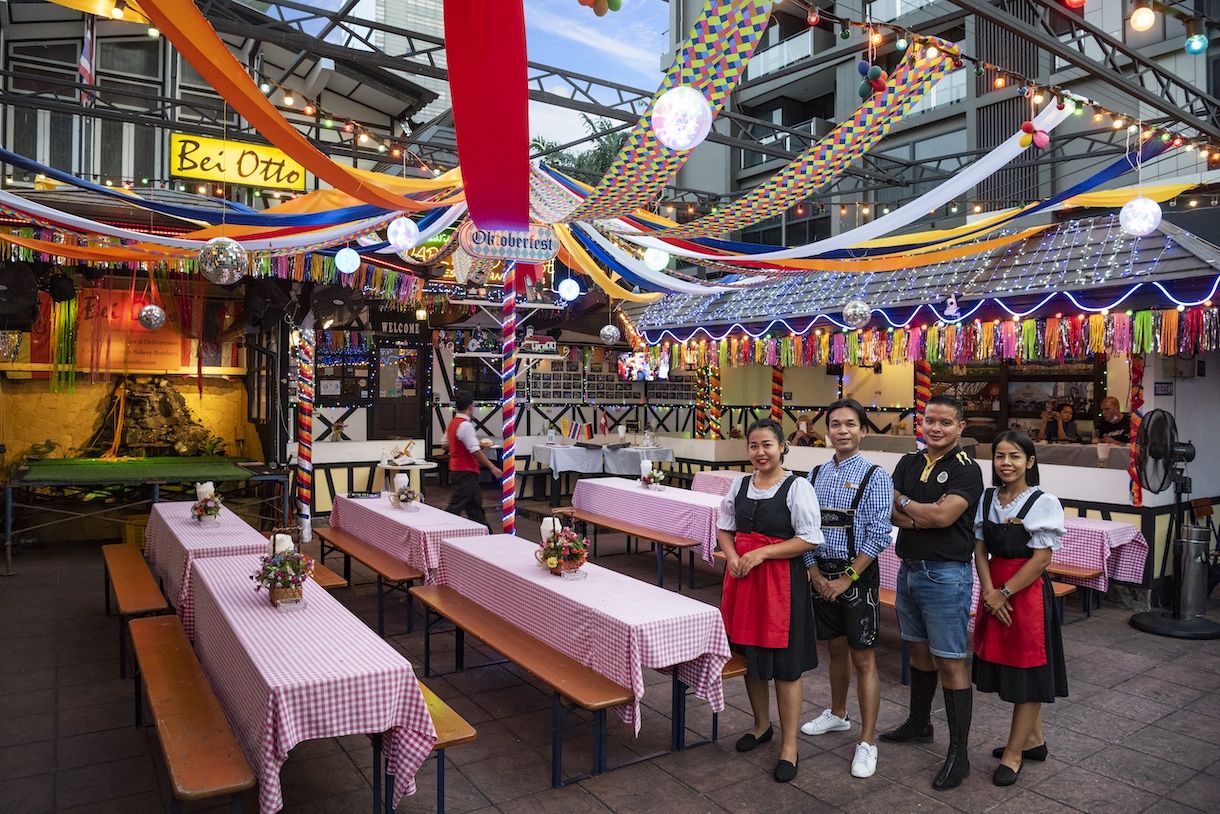 A recently published book by the German author Martin Schacht with photos by the two photographers Ralf Tooten and Wolfgang Bellwinkel testifies to how closely the two cities are connected. The idea for this exciting project came from Maren Niemeyer, Director of the Goethe-Institut Thailand, who has lived in Bangkok for six years.

The Goethe-Institut Thailand, the German-Thai Chamber of Commerce and the Thai-German Society celebrate their 60th anniversary, the Thai Embassy in Berlin and the German Embassy in Bangkok look back on 160 years of diplomatic relations between Thailand and Germany. It’s a fascinating story that connects the two cities, whose names begin with a B. All started in the KaDeWe – Department Store of the West.

The opening of KaDeWe took place on March 27, 1907, but the hoped-for boost from the visit of a high member of the German imperial family was not forthcoming. On the other hand, a two-day visit by the Siamese King Rama V and his entourage to KaDeWe in August 1907 made the desired impression on the nobility and the bourgeoisie. The king’s shopping trip dominated the headlines and gave KaDeWe the higher consecration that was still missing to make it the first house on the square. The king dined in the Fürstenzimmer and spent 250,000 marks during his visit. Rama V subsequently awarded Adolf Jandorf, the owner of the new luxury department store at the time, the Order of the White Elephant.

The Siamese king, an ally

The Thai monarch, who had already visited Germany and Europe for the first time in 1887, was considered a friend of Kaiser Wilhelm II and Thailand, then still Siam, an important economic partner in Asia, which was otherwise dominated by the colonial powers of England and France. The Siamese king was seen as an ally who both supported the German economy and accommodated the German need for influence in the world. In fact, German companies in Thailand were involved in the development of the infrastructure as well as the postal system and the telegraph network. King Rama V (Chulalongkorn) was so popular with the German population that the Berlin operetta king Paul Lincke, who knew better than anyone how to package the mood of the Wilhelmine bourgeoisie in marching music, dedicated a piece of music to him: The Siamese Guard Parade is still popular today at New Year’s concerts of brass bands.

The KaDeWe: an eventful history

Even when it opened, the department store exceeded all expectations and offered a wide range of products that were rare and often unknown to German customers. In addition to a fashion assortment that came directly from Paris, a special attraction was the “gourmet floor,” which is still famous today and featured exotic fruits from the South Seas. The department store also had special services, such as a pneumatic tube system, a lending library, and over twenty passenger elevators. The architecture was impressive with magnificent window facades, light-flooded sales halls and wood-paneled refreshment rooms.

The Hertie Group, which took over KaDeWe in the 1920s, was expropriated by the Nazi regime. During World War II, an American airplane crashed into the roof of the building and caused a major fire. The reconstruction dragged on for almost a decade and a half. It was not until 1956 that the complete reconstruction was completed. In the sixties, the KaDeWe lost a large part of its regular clientele due to the construction of the Berlin Wall. Nevertheless, it gradually regained its old popularity and became one of the most famous sights in West Berlin. Immediately after the fall of the Wall, the department store had the highest number of visitors in its history. Today, KaDeWe is an international department store, offering international designers and brands on more than 60,000 square meters. It makes 40 percent of its sales from tourists, preferably those who like to spend a little more.

Luxury and tourism are the two global trends in which the new owners also believe. 51 percent of the KaDeWe Group, which also owns Hamburg’s Alsterhaus and Munich’s Oberpollinger, is now owned by Thailand’s Central Group, a group owned by one of Thailand’s richest families. Central operates some of the largest shopping malls in the world, several of them in Bangkok.s der Welt, mehrere davon in Bangkok.

Interview with Madame Yuwadee Chirathivat from the Thai owner family of KaDeWe:

Did you know that KaDeWe has a very long connection with Thailand?KaDeWe eine sehr lange Verbindung zu Thailand hat?

Yes, since 1907, when King Rama V visited KaDeWe on a trip to Europe. The king has been to Europe several times. He had a friendly relationship with Germany’s Kaiser Wilhelm II. He even had buildings built in Germany, e.g. a pavilion in Bad Homburg. Thailand and Germany have a long, good relationship.

Does history matter to your interest in European luxury department stores, or is it just a coincidence?

Our company has a long history, we started as a retailer. Our goal is to always have the best department store on site and the opportunity arose. The KaDeWe is Germany’s most famous department store and that is why we invest there. Our aim is to make the overall shopping experience even better and more rewarding.

Do you think that Thais or Asians generally have a different relationship to shopping and luxury than Europeans? Can Asians enjoy that more?

Germans like to buy practical things but the buying behaviour is changing. People spend more money on fashion, entertainment or good food. Thais generally love luxury brands. The KaDeWe was never known for luxury brands, the centre of the KaDeWe was always the famous food floor. We brought in the luxury brands. This is very well received. Even if the Germans are often somewhat traditional, they are now slowly getting a taste for the luxury brands. We try to combine German labels and international brands well. We want to offer something for both tourists and Germans. Luxury still has great growth potential. We simply want to make KaDeWe more modern and up-to-date, to be the best department store with wide-ranging and unique selections for our customers.

Is there something specifically Thai at KaDeWe?

We offer a selection of Thai food products and we also have a restaurant called Papaya where we offer authentic Thai food.

In Bangkok you have very stylish malls. How will you change the look of the KaDeWe?

Our on-going renovations, with star architect Rem Kohlhaas, balancing the size and heritage of the store, with the modern evolution of retail, making KaDeWe a design icon for department stores.

What does a department store have to offer today to differentiate itself from others?

The traditional department store model has been put under pressure with competition from online shopping. For us, it is about allowing them both to work together, benefitting both and giving a 360-degree shopping experience to customers through multiple channels, which is why we embrace the omni-channel retail concept. The key to success is good marketing and, above all, service. Good service is the most important thing for customer loyalty and we are always in close contact with our customers.

The department store business continues to develop. My family and I are very passionate about this business – and have been for over 70 years. If you don’t love the job, you don’t do it well. We never stop improving, by bringing in innovations and new ideas, through new concepts and technologies, all to satisfy our customers and their ever-changing needs. We have the ambition to keep developing. We are very proud of this. And we also want to give something back to the society.

Excerpts from the book Berlin-Bangkok

This book by Martin Schacht inspires readers to immerse themselves in the stories and images of the two metropolises. Through the lenses of renowned photographers Ralf Tooten (Bangkok) and Wolfgang Bellwinkel (Berlin), the stories from two very different cities come together to reflect each other’s influences.

*This is an affiliated link. You don’t pay more. It is just a little thank you for our team.