Dance of the molecules

Written by Margit Hiebl on 23. January 2021. Posted in Cream, Culture. 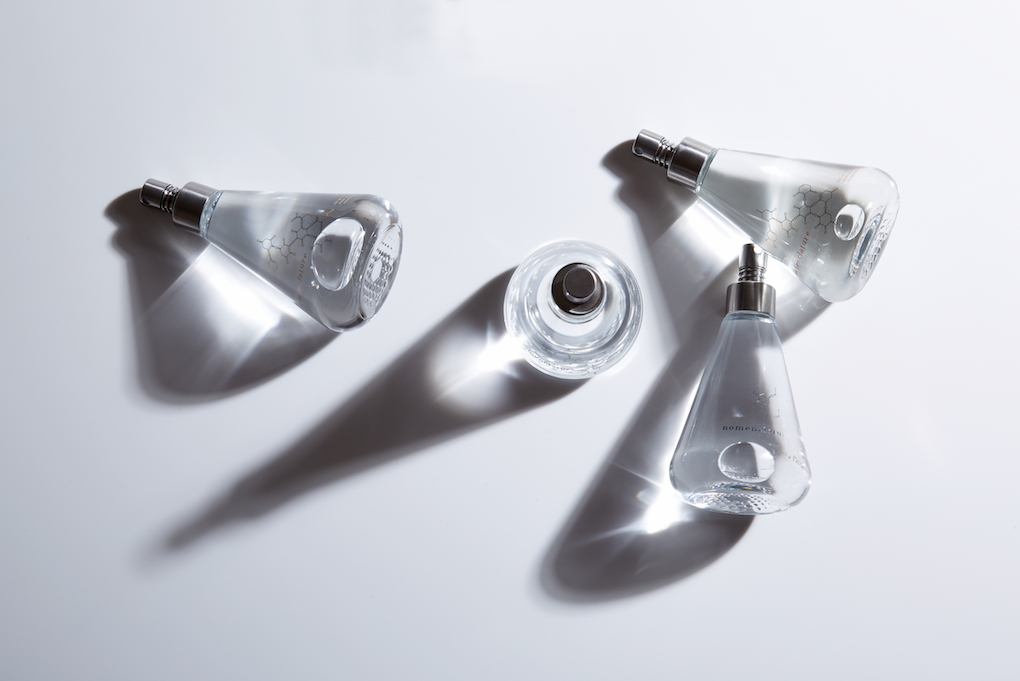 Smelled a thousand times, maybe even right now. And yet we mostly don’t know their names. Synthetic fragrances, the molecules, are the big players in perfume creation. And quite literally: Without them, a playful, sometimes provocative approach to fragrance design is inconceivable. Many of the great classics would not exist without them. Because the synthetic fragrance molecules are not an invention from today’s tech labs: A molecule called “Coumarin” was used for the first time in 1882 in the “Fougère Royale” fragrance. Also “No. 5” from Chanel would not have this impact without the aldehydes and what would “Shalimar” from Guerlain be without its typical note, which comes from ethyl vanillin. The New York label Nomenclature celebrates these molecules in a special way. Culture & Cream author Margit Hiebl spoke to one of the founders, Karl Bradl (whom she still knows from his days in Munich).

Where does the name “Nomenclature” come from?
From the Latin nomenclatura (“calling by name, assigning of names”), from nomen (“name”) + calare (“call”)\ the act of naming\ the system, set of terms or symbols used in a particular science, discipline or art.

What’s the idea behind?
In the commercial and even in the niche perfume world, nobody ever spoke of molecular ingredients back when we started the brand. With Nomenclature we wanted to bring attention to the ingredients that are responsible in adding the magic to the fragrance creations. Nomenclature celebrates design in perfume chemistry by showcasing today’s most inspiring, exclusive molecules – so exclusive that some, known as “captives”, are zealously guarded by fragrance companies.

What’s so special about the molecules, that are focused by Nomenclature?
With the Nomenclature creations we highlighted some of the most important molecules that influenced past decades in the perfume market. For example: Hedione used in “Efflor_esce” was first synthesized in 1962 and is an active ingredient in Dior’s “Eau Sauvage” which came out in 1966. “Fluo_ral” highlights „Calone“, which went on to spawn the most iconic fragrance family of the 90s: the aquatic fragrances. Or Coumarin, which we used in “Psy_cou”: Coumarin was the very first molecule that allowed perfumers to cut loose from the past and venture into modern abstraction. First used in 1882 in the groundbreaking “Fougère Royale” – this synthetic marvel ignited a new era of artistic expression. Named after kumarù, the word for the tonka bean tree in Tupi, an Amazonian language. Coumarin is not only the primal source of modern perfumery, it is still a primary material in the fragrance industry.

What’s the challenge with this project?
To not overdo it in regards of too many ingredients but still have an innovative creation. The molecule needs to shine.

You’re a trained banker – when did your passion for fragrances start?
My fascination with fragrance started when my mom gave me a bottle of “Rothchild” for Christmas in the early 80’s. I was so much into that scent that I started exploring the local perfumeries near my home town in Passau. My scent library grew very fast…from Armani, YSL “Kouros” and Dior “Poison”…I covered them all. By the time I reached 20 years I got tired of the fact that everyone was wearing the same scents which made my enthusiasm for fragrance slow down.

What brought back the fascination?
When I moved to New York in 1992, I started to discover niche brands in my friends bath room and I became really curious and fascinated with fragrances that I’ve never heard of before. I dove deeper into the ‘niche’ perfume world (back then the word niche in perfume wasn’t a thing yet). This awakened passion ultimately led to the opening of my perfume shop Aedes de Venustas – along with my business partner Robert Gerstner in 1995.

Who’s the mastermind behind Nomenclature?
Carlos Quintero and me. Carlos Quintero, a self-described “Renaissance” designer, sees his work as a process that can be applied to any facet of life – be it fashion, graphics, furniture, packaging, digital, accessories, objects. He has worked in Italy and New York for prestigious global fragrance, fashion and publishing houses and created the modern concept od Nomenclature. And me, while I’m not a “nose”, my role is a defining one: I conceptualize each scent, choose its notes and ingredients, and guide the perfumer throughout the development process.

Where are the perfumes made?
It depends on the fragrance. Some of the oils come from France such as the creations of freelance perfumers Nathalie Feisthauer and Bertrand Duchaufour. These oils are shipped from France and then processed at a local fragrance lab in New York. The remaining ones are done by the fragrance houses here in the USA (Firmenich, Mane etc). The next step is bottling, boxing, cellophaning. That part is done in an artisanal way by hand in our Nomenclature studio in Bushwick, Brooklyn.

Which fragrance is the most popular?
“Adr_ett”, which highlights Helvetolide musc. Synthetic Muscs have been around all the way back to 1888. Helvetolide musc was patented in 1991 by Firmenich and is one of the finest musks out there. We added iris and pink pepper which gives it it’s clean character like a white freshly ironed shirt – hence the name „Adrett“.

How do preferences differ in different countries?
Southern countries seem to prefer heavier scents . In Italy for example our bestsellers are “Psy_cou”, “Holy_wood” and “Lumen_esce”. Northern countries are more prone to transparency. “Adr_ett” and “Orb_ital” perform very well in Denmark, The Netherlands, Germany and Russia.

Which one are you fond of?
I can’t get enough of “Holy_wood”. If I had to choose one fragrance I have to live with for the rest of my life, it would be that one.

As there are so many of the synthetic molecules … Nomenclature will be an never-ending-story?
We could go on and on as there are always new captive molecules being developed. But I feel that with the first 10 we covered the most groundbreaking one’s and I think we will slow down with this collection, unless I feel there is one that needs to be introduced.

What’s coming up next?
There will be a second collection launching this Spring 2021 that will be about “modern perfumery”. Even though there will be molecules in these creations, this time the molecules won’t be the main story .