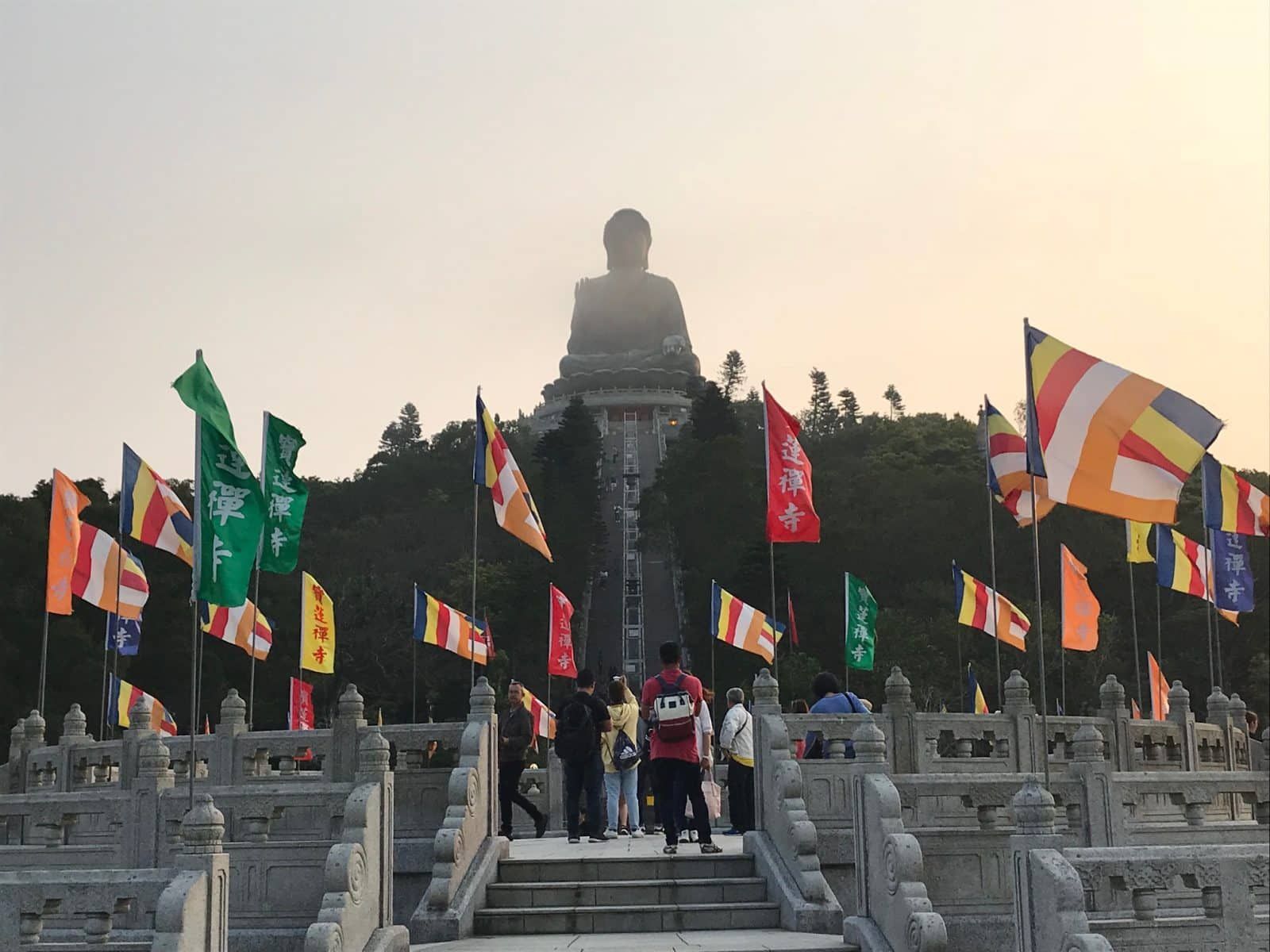 A city that’s always good for a surprise

When you think of Hong Kong, the first things that come to mind are old junks, street canyons, Dim Sum and the lively hustle and bustle of the streets. Reasons enough to pay a visit to this old Crown colony on the South China Sea. On our first morning in Hong Kong we are greeted by the most beautiful view I have ever seen. From our room in „The Kerry Hotel“ we look through the glazed façade directly on to the Bay where, along with countless junks and water taxis, a cruise ship languidly bobs on the shimmering surface of the water. The Kerry, Hong Kong’s first resort hotel, opened just a few months ago. Its infinity pool and numerous cosy places to relax make it no easy task to leave the grounds and explore the city.

Sightseeing on water and land

But Hong Kong has so much to offer. One of the double-decker ferries of the over 110-year old Star Ferry Line takes us through Victoria Harbour to Hong Kong Island on the north coast. From there we take the Peak-Tram 552 metres up to Victoria Peak. It’s no mystery why members of the colonial society chose to reside here at Tai Ping Sahn, the “mountain of great peace” – the view of the city, the other shore, the Kowloon peninsula and the island of Lantau is absolutely stunning. At least when it’s not hazy. Hong Kong’s epicentre is the Central District,  the city’s financial and business hub. The different downhill levels are connected by the mid-level escalator, or central escalator for short, a system of 20 staggered escalators and three conveyor belts. The area boasts innumerable fashion boutiques, art galleries and antique shops just waiting to be explored. The trendy Soho district south of Hollywood Road is well-known for its historic, narrow streets and elegant, trendy restaurants. If relaxation from the hectic hustle and bustle is what you seek, the Man Mo-Temple offers a quiet oasis. This Taoist temple is the oldest in Hong Kong and is dedicated to two very different deities: Man Cheong (God of literature) and Mo (God of war). The complex was built by wealthy Chinese traders in 1847, during the early years of British colonial rule. By far the most entertaining and cheapest way (about 30 cents) to explore Hong Kong Central is with one of the old Ding Dings, trams that run all the way from east to west. If you have time, it’s well worth it to make yourself comfortable in an upper compartment then hop off and on at leisure to explore some areas a little closer.

Over 268 steps to the Big Buddha on Lantau

Tian Tan, the huge bronze Buddha enthroned amidst the green hills of Lantau Island, is a popular destination as well. At a height of 30 metres and weighing 250 tons, it was considered the largest seated Buddha statue in the world up until 2007. In the meantime, it has been officially outranked by the 71-metre high statue in Leshan, The People’s Republic of China. If the 268 steps are a bit too daunting for you, the Big Buddha and the adjacent Po-Lin Monastery can be reached in about 20 minutes with the Ngong Ping 360 cable car. Choose the slightly more expensive glass-bottomed gondola for a phenomenal downward view of the surrounding landscape. About one third of Hong Kong is has now been re-forested and the area of just over a thousand square kilometres is home to more species of fauna and flora than can be found in the Motherland of Great Britain.

A short side trip to a true shopping paradise

Hong Kong is not only a scenic paradise, but one for bargain hunters as well. In markets such as the Ladies Market or the Temple Street Night Market there are fake handbags, watches, shoes and electronic devices en masse. All of them Chanel, Gucci, Supreme or whatever the fashionista heart desires. But that’s about it. The markets would actually be easy to find even with one’s eyes closed since the goods literally stink to high heaven or, in this case, throughout the market alleys. No wonder! All the pseudo fakes are the cheapest kind of plastic junk, which, in this country, wouldn’t even cause a ripple at Rudi’s surplus outlet.
But the real El Dorado for fake shoppers can be found just outside the city limits in Shenzhen, China, a good half an hour’s journey from Hong Kong with Metro MTR Line 4. A one-way ticket costs the equivalent of four Euros and, on the spur of the moment, we decide to pay this close neighbour a visit. In the subway it’s not hard to guess where all the passengers are headed since most of them are well prepared and have small suitcases or a shopping trolley in tow.

40 minutes later here we are. End of the line Lo Wu. All we have to do is follow the flow of people towards the border crossing. The only thing we need is the obligatory visa for China or Shenzhen but this is available for 160 CNY and a bit of a wait. After all, the first floor Visa Office takes great pride in neatly and painstakingly pasting the visa into each passport. We take the escalator down again, through another border control and find ourselves on the huge square in front of the Lo Wu Shopping Plaza, also known as Luohu Commercial City, a six-storey mall with the irresistible charm of a socialist shopping temple. “Beautiful” is something else! Of course, we are an easy target for the waiting shopping touts: “What do you want to buy?”, “Come here to my shop!”, …. The basic rule is: don’t react or you’ll never get rid of them. Inside, the whole thing is even uglier than we feared. Hundreds of tiny shops specialising in shoes, clothing, bags, electronics – or everything at once. We try our luck in Ivy’s shop. What are we looking for? Well, perhaps a nice Chanel handbag or maybe an aluminium suitcase from Rimowa. Ivy gives us a conspiratorial look, then pulls a big catalogue out of a box. We can’t believe our eyes: all possible models, neatly sorted by manufacturer, are listed here – even ones that don’t actually exist.

“A”, “AA” or “AAA”? Ivy asks when we finally select a handbag. “A” stands for lower quality, “AAA” for the best, meaning flawless leather and perfect workmanship. But here’s the thing: there is the Shenzen of copies and duplicates but the Shenzen of possibly genuine articles as well, originals that aren’t brought in via the usual trade routes. Even some experts find it hard to distinguish the authentic from the imitation. We want to see the difference for ourselves and order both “A” and “AAA”. Ten minutes later the goods arrive, directly from a shady-looking department store. And “AAA” actually is indistinguishable from the genuine article. Best leather, great workmanship. Ivy watches us with eagle eyes and when we ask for the price, she pulls some fantastic figure out of the hat. But haggling is the order of the day here and bargaining is expected. “Name your price” says Ivy as we shake our heads and get ready to leave the store. After a tough back and forth we finally reach an agreement and buy two aluminium suitcases, a leather wallet and a leather clutch for the equivalent of 250 Euros. Not cheap, but well worth the price. On our return to Hong Kong we once again pass through countless border checks but no-one shows any interest in our purchases. The only thing we’d forgotten in our shopping frenzy: What to do with our old suitcases? Oh well, we’ll just have to leave them in Hong Kong – we’re sure to be back before too long!