Tested for you: Nail Strengthener „Si-Nails“ from Isdin 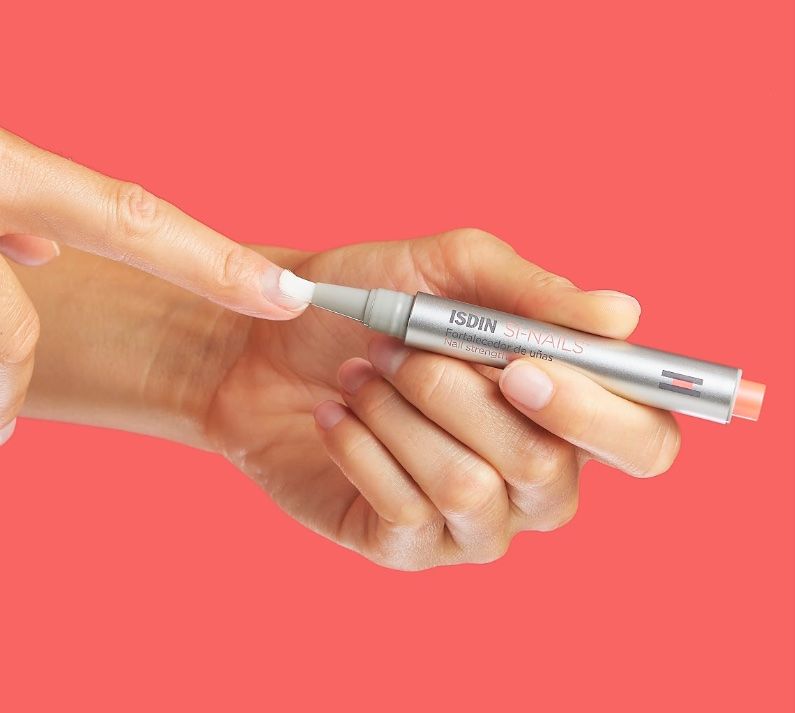 I love nail polish. Since I can think cosmetically, I paint my nails. Earlier exclusively red, later only black – in the meantime I have landed with blue and green, gladly also with metallic effect. Yes, admittedly, this does my nails over the years not particularly good. By the way, it doesn’t matter which nail polish and whether I use a base coat.
The nails become brittle and dry. A beauty expert once told me that it’s not so much the nail polish that’s the problem, but the nail polish remover: the stronger it is, the more it attacks the nail.

Trick from a celeb nail pro

Well, I use one that also removes metallic polish in one wipe and does not smear around. Afterwards, I wash and cream my hands and nails immediately, but it still dries out the nails. So that I do not have to paint off too often, a special trick is used, which Tom Bachik, (the nail artist of Jennifer Lopez and Margot Robbie!) has revealed to me in an interview: Daily apply a little nail oil on the nail roots and the painted nails – so the lacquer remains supple, does not splinter so quickly and lasts longer. Works.

Nail strengthener for the lacquer break

But back to the painted nail. So that the nails recover again, I make, even if it is difficult for me, again and again lacquer break. From one day to a week. But even one day helps to put the nails in better condition. Because for this I have discovered a cool product for me: The nail strengthener “Si-Nails” from Isdin.

The active ingredient concentrate in the pen-shaped container is transported by clicking on the integrated brush and can be easily applied like varnish to the clean, dry nail. It dries quickly and leaves the surface silky shiny. The nail really looks immediately healthier, I think – even though according to the recommendation, you should apply the nail strengthener for at least 14 days to achieve optimal effect. But I can’t stand the polish break that long (okay, okay… I’ll get there eventually). And also the cuticle looks very well-groomed and soft, because you are also supposed to brush the product beyond the nail. Best in the evening, so that it can act well overnight.

Ingredients of the nail strengthener

Organic silicon to support nail growth. Mastic oil, which stimulates the synthesis of hard keratin and keratin-associated proteins, making the nail more resistant. Also: cationic hyaluronic acid, which moisturizes the skin and nail, making them supple. And this is exactly the advantage over conventional nail hardeners: the product makes the nails not just hard, but resistant and supple, reducing the risk of breakage. At the same time, it cares for the cuticles. It also doesn’t need to be removed like a base coat, as it is water-soluble. And – big plus – it doesn’t contain formaldehyde like most of the competitors.

Bottom line: Cool. Convenient. Works. It’s on my desk. And it’s not just applied before bedtime.