Venice – Indulge in Luxury at Bauer Palazzo on the Canale Grande 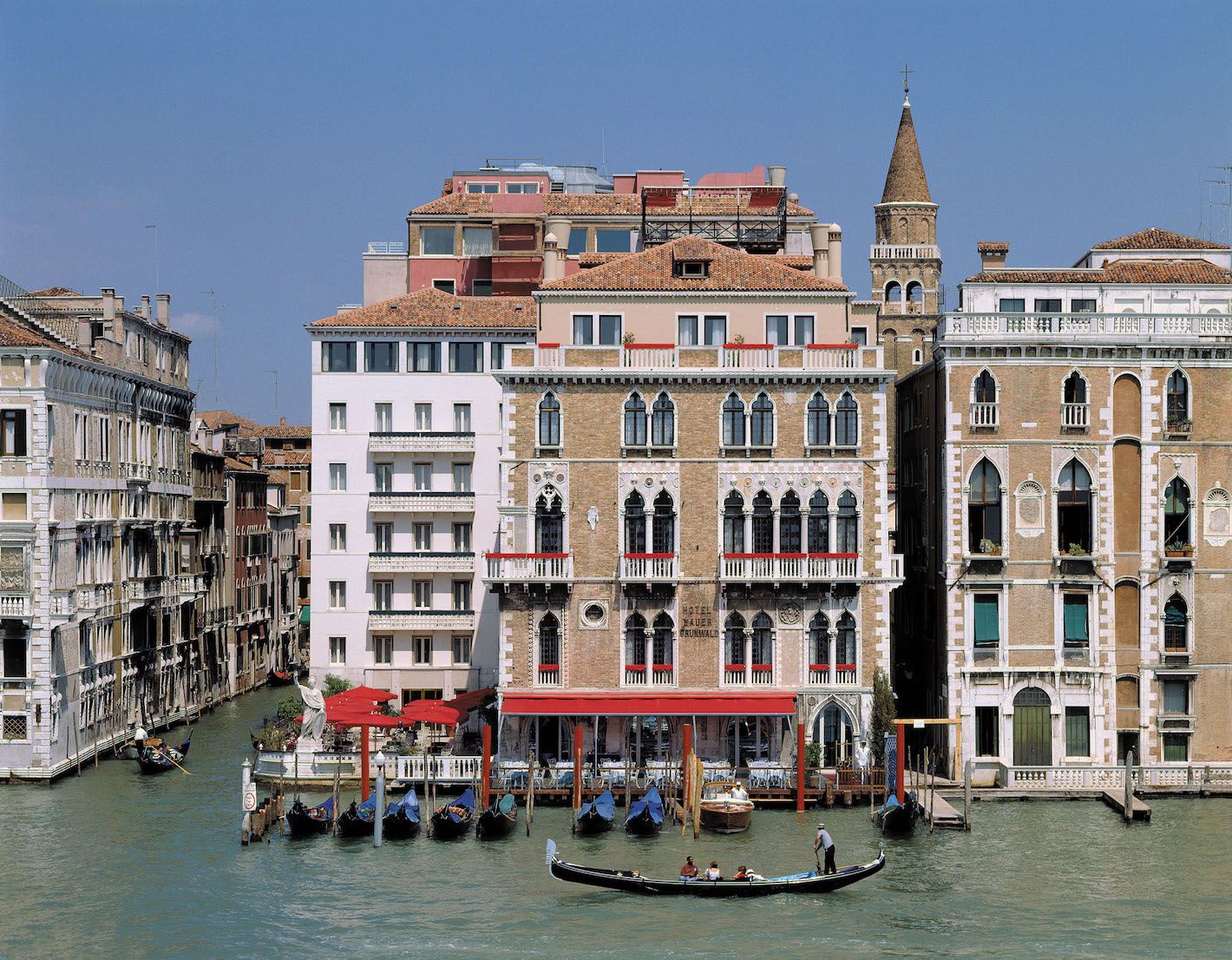 Elegance is timeless, so they say. This is especially true of houses like the time-honored Bauer Palazzo in the heart of Venice. It’s as close to the Grand Canal and St. Mark’s Square as you can get – and so wonderfully luxurious.

Venice’ Bauer Palazzo in the heart of the Italian lagoon city delights with its Art Deco-inspired design from the 19th century as well as with a fabulously large roof terrace – the highest in Venice! Gourmets should be very pleased both there, on the seventh floor, in the fine-dining restaurant with the appropriate name „Settimo Cielo” (seventh heaven), as well as in the gourmet restaurant “De Pisis” with terrace and view of the Grand Canal, which is located on the first floor.

Venice at its finest

Since 1880, Bauer Palazzo has been welcoming guests in 191 rooms and suites that couldn’t be more chic. Murano glass, marble, and ornately printed wallpaper are found alongside ceiling paintings, crystal chandeliers, carved stucco ceilings, and gilded mirrors. Even one night in these beautiful surroundings feels as wonderfully sophisticated and romantic as a gondola ride on the Grand Canal. It is the main waterway in the “city of a thousand bridges”, the Venetians call it Canałazzo, with a length of almost four kilometers, between 30 and 70 meters wide and up to five meters deep. The first bend of the S-shaped canal is called Volta di Canal.

Speaking of romance, by the way, the Bauer Palazzo was founded because of a beautiful love story! The young Austrian entrepreneur Julius Grünwald fell in love with the daughter of a respected hotel director named Theodor Bauer. The couple then unceremoniously commissioned the construction of a hotel by combining two separate properties right at the entrance to the Grand Canal.

Today, the Bauer Palazzo is one of the “Leading Hotels of the World” and delights not only tourists with its central location, courteous service and charming ambience. Many locals also visit the cozy “B Bar Lounge” on the first floor, especially in the evenings. There you can enjoy not only creative cocktails and fine wines, but also jazz evenings and live music every year from autumn.

Those seeking more togetherness should take the elevator up to the 8th floor. There, above the rooftops of Venice, guests of Bauer Palazzo will find an elegant gym equipped to the latest standards, as well as an outdoor Jacuzzi with a view of the St. Mark’s Tower. A luxury that is priceless! The only place in Venice that is even higher up in the sky is the St. Mark’s Tower.

Venice: The master of the house

The St. Mark’s Tower is the bell tower (campanile) of St. Mark’s Basilica. The five bronze bells can still be heard everywhere in Venice when they are rung several times a day – now via an electric drive Its height is 98.6 meters, making it the tallest building in Venice. Originally, its spire served as a lighthouse for ships. The Campanile is undisputedly the symbol of the lagoon city. Traditionally, it was called “El paron de casa” in Venetian. In English “The master of the house”.

The construction of the Campanile was begun between 888 and 911 under Doge Pietro Tribuno. But what we see today is no longer the original. On July 14, 1902, at about 9:45 in the morning, the tower collapsed after large cracks had formed in the masonry days before. The accident was attributed to the fact that the metal anchors inside the tower had previously been removed in order to install an elevator. When the tower collapsed, the back of the directly adjacent Biblioteca Nazionale Marciana was also badly affected.

Work on the reconstruction of the tower began on April 25, 1903, under the direction of the Italian engineering firm of Giovanni Antonio Porcheddu, a pioneer of reinforced concrete technology. The new campanile, in addition to traditional masonry, is partly made of reinforced concrete, which makes it significantly lighter in weight. On April 25, St. Mark’s Day in 1912, the restored Campanile di San Marco was solemnly inaugurated.

During reconstruction, the pile foundations proved to be still very good even after almost 1000 years. They were completely fossilized and were therefore initially only reinforced. Then, however, problems did arise, so in 2008 work began on securing the St. Mark’s Tower with a titanium surround. Instead of the ramp running around the inside, which originally led to the top, a staircase was installed. Today, the bell floor of the tower can be reached via an elevator for a fee.

Every two years, the Biennale d’Arte in Venice is as imposing as the St. Mark’s Tower. Then the two areas Giradini and Arsenale in the east of the city as well as several historic palazzi in the center are completely dedicated to art. In 2022, 80 creative artists from all over the world will exhibit their works under the motto “The Milk of Dreams” – from paintings and sculptures to live performances and installations (until November 27, 2022).