Blue Hour at the Murnau Alpenhof 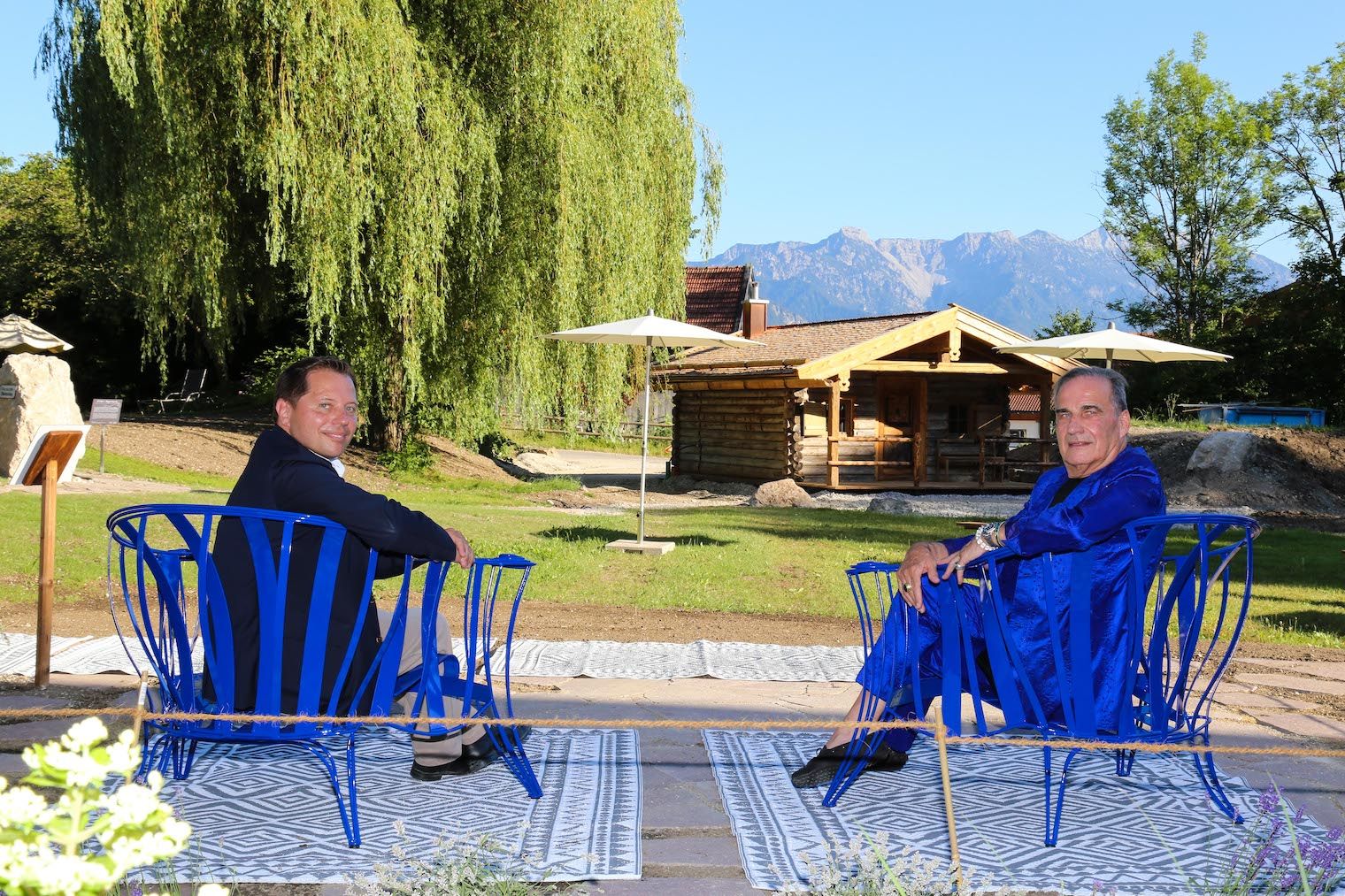 When art, gastronomy and nature form an alliance, something very special comes into being.

With three such mainstays, nothing can go wrong. Christian Bär (in the picture on the left), the congenial Murnau Alpenhof hotelier, extended an invitation to the festive installation of the exclusively designed Blue Chairs in his new garden. His motto: “A View of the Blue Country”. And indeed, all signs pointed towards blue. In the presence of Dr. Brigitte Salmen, Blaue Reiter (Blue Rider) expert, author, initiator and former director of the Murnau Castle Museum, the two blue, sculptured outdoor chairs, created by Ascona designer Carlo Rampazzi (in the picture on the right) and manufactured at the Sergio Villa’s Monza Studio, were unveiled. Blue cocktails were served, and Chef Claus Gromotka created a Diner en bleu for the Soirée bleu. And, as if in honour of this opening evening, the shimmering blue of the mountains changed to a soft pink at sunset.

Up until this autumn, guests can enjoy the “View of the Blue Country” from the Blue Chairs and pose in them for photographs to their hearts’ content. “Everyone should take something blue with them from their stay at the Alpenhof,” says hotel manager Christian Bär. But if you want to become the proud owner of one of Carlo Rampazzi’s chairs, you’ll have to dig a little deeper into your pocket. The unique, handmade chairs cost around 4000 Euros each and it takes at least two weeks for one to leave Sergio Villa’s studio. Rampazzi: “Even a mistake made by a craftsman is a bit of art. And that’s what I like.” So far, only 25 of his blue metal armchairs can be found worldwide, so it’s unlikely that your neighbour will already have one in his garden. Carlo Rampazzi calls them relaxing chairs and indeed their shape, which fits snugly to the body, makes them very comfortable to sit in.

The King of Colours

“In the beginning we made the chairs in several different colours,” says Signore Rampazzi, “but our customers wanted only blue. So the chairs were born in blue, so to speak”. Originally they came with cushions of the same colour. “But they were just over the top. The armchair is a sculpture and that just took away from its beauty,” says the designer. For Rampazzi’s usually opulent style, the chairs are rather modest. Villas and apartments from Milan to Paris, from Miami to St. Petersburg and Zurich to New York bear his signature. He is regarded as the king of colours and knows all too well how the power and magic of colour can create a positive living experience. But he always has a surprise up his sleeve and with him, one should just expect the unexpected.

Furniture with a soul

According to the designer, his best ideas come when he talks to people. “I always want to surprise them,” he says. “I have an idea in my head, but I can’t develop it on my own. It was the same with the chairs. I had created this form as an interior design, and some were already installed in various hotels. When I then spoke to people who liked them, I came up with the idea of designing a metal version for outside.” For him it is the first outdoor furniture of this kind. Rampazzi always sketches out his ideas by hand. His team then transfers the design to the computer before it lands in Sergio Villa‘s studio. Most important for the designer: “I always try to create furniture that has a soul.”

A magnet for artists

The Murnau Alpenhof certainly does have a soul and is just the right temporary home for the Blue Chairs. Christian Bär, born in Murnau and hotelier from the word go, sees to that. And the stunning Alpenhof surroundings take care of the rest. The unique play of colour and light against the backdrop of the Bavarian Alpine foothills has inspired such illustrious artists as Franz Marc, Gabriele Münter and Wassily Kandinsky. “It is no coincidence that the ‘Blaue Reiter’ movement came into being here and that from our Murnau, the world of Modern Art was completely turned on its head,” says Christian Bär. Among other works, his hotel garden houses the sculpture “Helix” by Sir Tony Cragg, (Anthony Douglas Cragg). The visual artist from Liverpool, who has long made his home and creative base in Wuppertal, currently has an exhibition in the Franz Marc Museum in Kochel am See.

The principles of nature prevail at the Alpenhof. Not only do the seasons and times of day determine what food is served or which wine flows into the glass: The mountains to which the guests are taken, who will guide them on a discovery tour to the Murnauer Moos and the fragrance prevalent in the spa are also in step with the rhythms of nature. A special aspect: The inner rhythm of the person, who’s sensitive chronometer must, in everyday life, often function contrary to its own cycles, is also taken into account. Bär: “We strive to create as much free space as possible so that everyone can individually shape the time they spend with us. With the right ‘ingredients’, we also create a completely natural sense of wellbeing for our guests”. This starts with the stylish, cosy rooms or on the terrace with its breathtaking view of the surrounding mountain panorama. It ranges from culinary highlights by chef Claus Gromotka (2 Chef’s Hat Awards and 15 Gault Millau points) to the long opening hours at Alpenhof Spa Yavanna. Whether an early bird or a night owl, everyone experiences their own special “feel good” moments. What particularly impressed me was Christian Bär’s answer to my question, what should I do at the Alpenhof? His response: “Absolutely nothing!