Written by Margit Rüdiger on 4. December 2021. Posted in Culture. 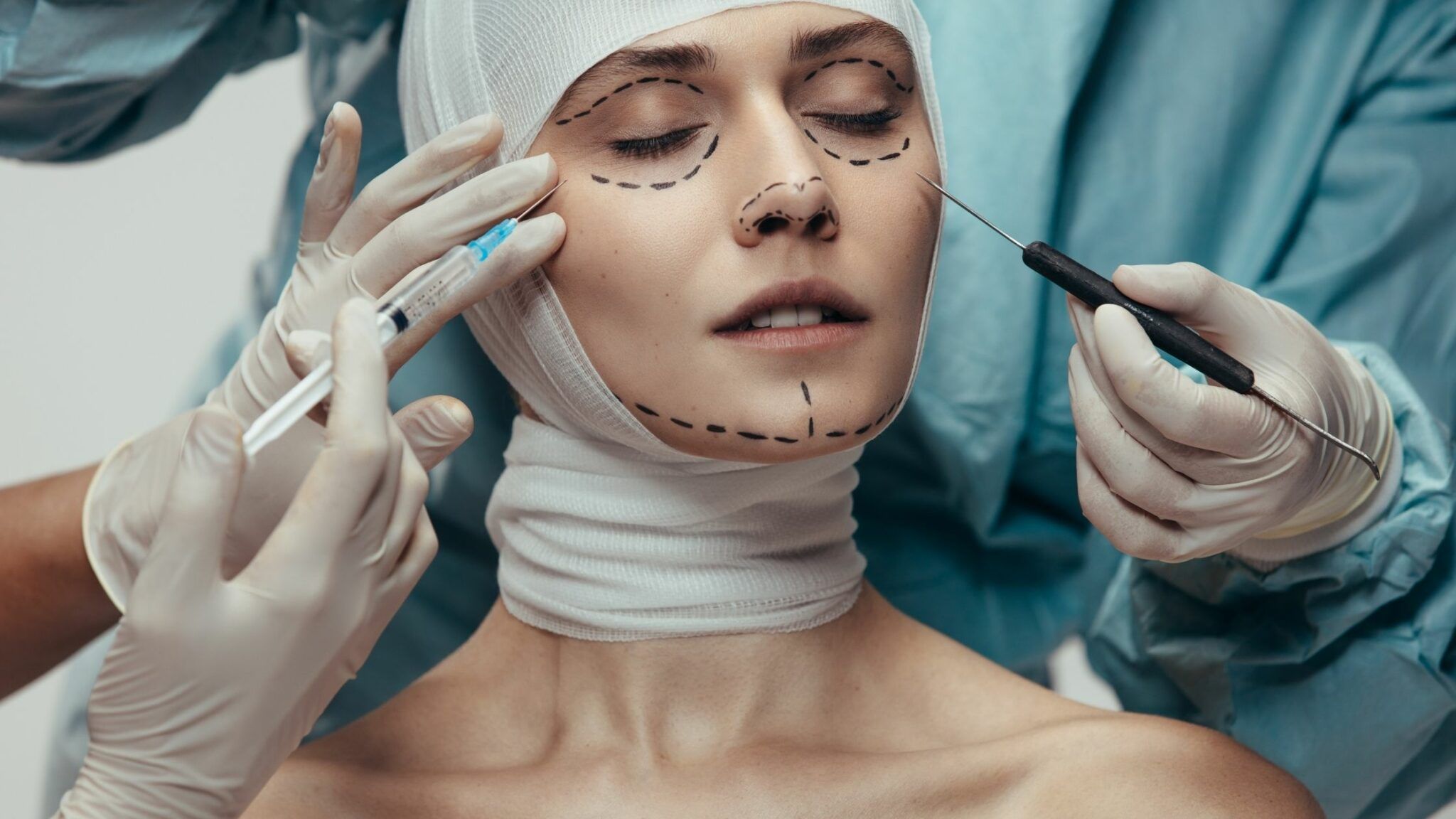 Not everyone likes or is able to accept their appearance and would say “I am the way I am”. Then a change is desired. If cosmetic surgery goes well, you look “not done”. If it goes wrong, however, you won’t get your screwed-up face back. There are already some celeb examples of this.

Some celebrities now even publicly admit that something went wrong during a cosmetic surgery procedure – not least because it can no longer be hidden. One of them is Linda Evangelista, the top model of the 90s. The beauty of yesteryear is hardly recognizable. According to her own statement, a surgery five years ago disfigured her so much that for years she hardly dared to go outside, fell into depression and, of course, couldn’t get any more jobs as a model.

Even the always very self-confident actress Jamie Lee Curtis, who used to speak out vehemently against the optimization mania in terms of beauty, at some point could no longer resist the temptation. The trigger was a film director who didn’t want to shoot with her because her eyes were “too big” for him. Curtis went under the knife for the first time. She is also not a good example of a successful procedure. With her confession, as she herself says, she wants to warn young people in particular. They shouldn’t be tempted to undertake a cosmetic surgery procedure by supposed social media ideals. “Once you’ve screwed up your face, you won’t get it back,” says Curtis.

If you look at the statistics, the number of cosmetic surgery is actually increasing, especially among young women. It’s interesting when you look at the numbers in Germany. Germany is considered a country that has so far reacted rather cautiously to plastic surgery. According to a recent study by Merz Aesthetics, the 29-39 year olds have increased from 3.5% to 29.1% for fillers and similarly strong for botulinum toxin. The figures from an evaluation by the International Society of Plastic Surgery (ISAP) put it even more precisely: With 457 Botox injections per 100,000 inhabitants, Germany ranks fifth worldwide for this procedure. In the global cosmetic surgery comparison, it ranks 8th.In addition to botox and hyaluronic acid injections, breast operations are particularly in demand. When it comes to breast enlargements, Germany ranks 8th with 80.56 operations per 100,000 inhabitants, just behind the USA. Belgium is the front runner. Germany also ranks eighth when it comes to buttock enlargements. In 2020, 4,490 augmentations were performed on this part of the body in this country.

TikTok and other social media apps has also increased the demand for a cosmetic surgery procedure, which is aptly referred to as “duckface”. Characteristic for it is a snout, means plumped lips, accentuated cheeks and a narrowed facial contour. You can easily imitate this look with a protruding mouth and cheeks pulled in using muscle power – just like posing was used in front of the cell phone camera in the childhood days of selfies.

These changes can now be achieved by injecting hyaluronic acid with shelf lives between six and 12 months. The “lip-flip” method is even more up-to-date. The doctor injects botulinum toxin into the muscles above the lip. He thereby achieves a targeted paralysis of this area, whereby the lip bulges slightly outwards. But be careful, even a small overdose can trigger a “cramped” facial expression. And not everything that looks good in photos also does in real life.

It doesn’t get any worse

One of the most absurd ideas came from TikTok user Jerry Mal (33.3 K followers). So far he had smeared everything possible on his already full lips to make them look even plumper. Then he may come up with the idea of putting an erection cream on his mouth, which caused an allergic reaction in him and made his lips swell. He got severe pain so that he had to take the cream off after a few minutes. Still, it earned him four million clicks. Medical professionals strongly warn against such methods only warn.

In fact, women often ask a doctor for help because they want to look like their own selfie with a beauty filter. Or they want the lips of model Rosie Huntington-Whiteley, who, however, has a naturally voluptuous mouth. Jennifer Lopez’s bottom or Gisele Bündchen’s flat stomach are also be used as a template. Pamela Anderson is the most sought-after role model among women when it comes to breast surgery.

The Texan Claudia Sierra shows that copy-and-paste can also be taken to extremes in this case. After nine cosmetic surgeries, she looks like a decal of Melania Trump. Although she admits that her changed reflection is still sometimes alien to her today, but she feels more comfortable with the appearance of the former first lady. This outgrowth of a disturbed body perception is already pathological, the doctors call it dysmorphophobia.

Surgeons have already reported on the phenomenon of “Snapchat dysmorphophobia“. It describes the compulsive behavior of hours of brooding over supposed problem areas and the resulting withdrawal from social life. But that is not a phenomenon that only arose in our time. The Italian neurologist Enrico Morselli described various cases of dysmorphophobia as early as 1886.

A wide variety of theories exist about the causes of dysmorphophobia. There is talk of childhood trauma or experiences that lead a person to the conclusion that external flawlessness is essential. Researchers at the University of California have shown that such people process visual impressions in the brain differently than healthy people. Dr. Torsten Kantelhardt, President of the German Society for Aesthetic Plastic Surgery (DGÄPC) says: “Sufferers can usually not be helped with surgery They are mostly dissatisfied with the results and often develop a real addiction to surgery.”

The recommendation of the association to its members is therefore: send away, even if in such cases there are sometimes wild insults of the spurned patients. Not so in the USA. Such cases are simply regular customers there. In the beauty clinic of New York surgeon Norman Rowe, Melania’s cheekbones and Ivanka Trump’s chin are at the top of the wish list of American women willing to operate. His colleague Franklin Rose even offers a “Melania Makeover” as a complete package in Houston, Texas.

Preserving instead of repairing

Today, beauty doctors with a sense of responsibility speak more of preserving beauty than repairing it with cosmetic surgery. The goal of a successful procedure, especially with injections, should be to preserve what you have. When one speaks of correction, it always implies a flaw that should be eliminated. And corrections change, but everyone has to decide for themselves. The question arises, is it legitimate to manipulate one’s own body? And doesn’t it already start with applying mascara, goes on to sports and even cosmetic surgery? And why do people struggle with their nose, with too few bosoms, too much stomach or strong thighs?

The remarks by the Austrian cultural scientist Elisabeth Lechner, who did her doctorate on ‘disgusting’ female bodies and body positivity at the University of Vienna, are extremely interesting on this subject. She says that “body positivity” is often misunderstood today when one thinks of its origin. It was the women’s movement and fat acceptance movement in the 1960s and 1970s that coined the term. At that time it was primarily against the discrimination of, for example, fat people who were neglected in medical care. Today it’s a hashtag under every bikini photo.

Dissatisfaction with the own appearance

Because of this wrong understanding, many people look for the fault in themselves, not wanting to accept a non-ideal appearance. According to the motto: “Why do I always struggle with my nose? Why can’t I just accept them like the sensible adult that I usually am?“ Lechner’s answer to this: “Anyone who is dissatisfied with their own body should not look to themselves to blame – but rather recognize which systemic problems are associated with ideals of beauty are.”

In Lechner’s opinion, beauty in our patriarchal-capitalist society is above all a way of “making new profits”. And it’s true. A part of the body is declared to be a stigma and the right product or technology is quickly launched to fix it. Lechner admits that although this is not a new finding, it may be very helpful to stop being lulled by every advertising promise. She suggests that one should understand why one struggles with certain features of one’s body – is it because of capitalism and patriarchy?

It is by no means about demonizing any “work” on one’s own body, but about an “emancipated approach to beauty”. If there is real psychological distress, it is legitimate to end this state, whether with or without cosmetic surgery. But if it is all about an appealing look, it is usually the better decision to preserve your appearance for as long as possible and not to (over)correct it.