Written by Margit Rüdiger on 6. January 2022. Posted in me&myself. 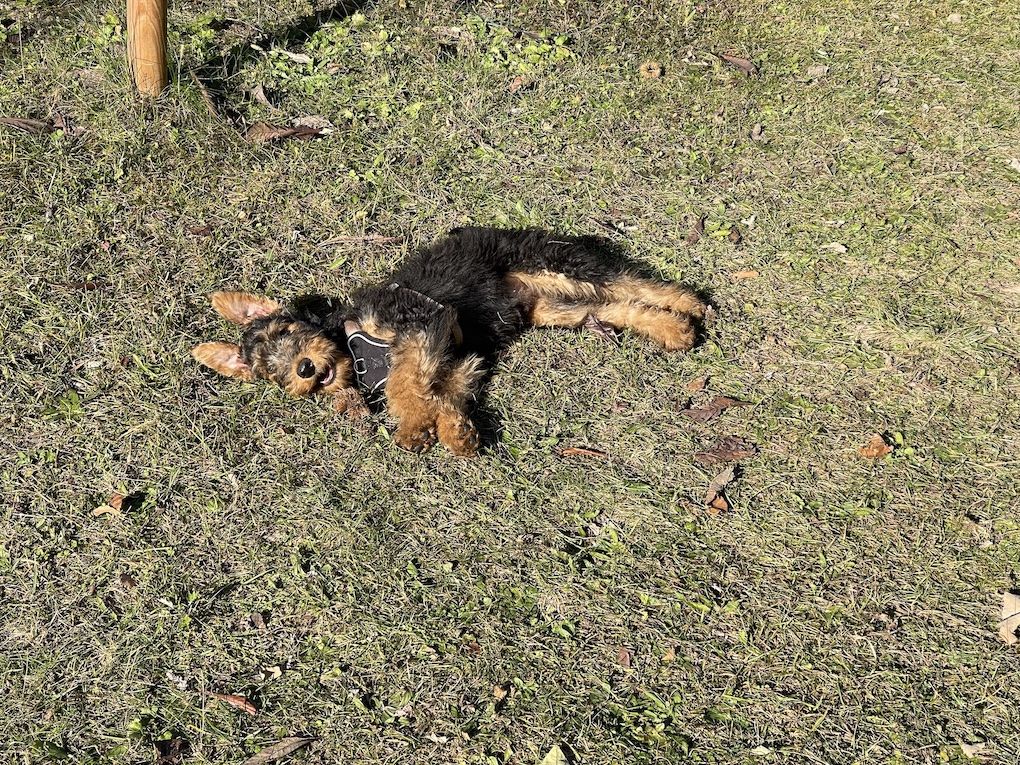 In the meantime our puppy dog arrived at our house. No, not with Amazon or DHL. We picked him up in Bad Sooden-Allendorf in Germany’s border triangle Hesse-Thuringia-Lower Saxony personally from an Airedale Terrier breeder. Means a trip of a 1000 kilometers there and back. My husband was already traveling by car in the region on business. Therefore I had to fly. In Paderborn he picked me up at the airport.

A tedious journey for me: getting up at 3:30 a.m., taking the S-Bahn from our home on the Ammersee to Munich Airport. Planned departure 7.45 h. Unfortunately not. The plane was defective. Replacement plane had to be cleaned and refueled first. But the delay was within limits. In the car on the way to the breeder I made up for an hour of sleep while my husband was driving.

Three weeks earlier we were there in the beautiful forest house in the middle of a forest for the first time to choose our dog. Five females and five males had the litter of Airedale Terrier bitch Ruby. To be honest, it was not us who chose the little male, but he chose us. It was like this: When I entered the kennel, all the puppies curiously came running towards me. Only one remained standing apart. He looked at me from a distance and raised his right paw as if to say “hello, here I am“. When I then lured him, he came running to me. From then on, his and my fate were sealed.

Our little Airedale is called Byron, after Lord Byron. I hope his lordship in heaven is not angry with me for that. But I devoured the poems and the “Don Juan” of the English poet as a teenager. Of course, friends are allowed to say Byron without the title to my little furry nose. Hahaha…

Although Byron’s pedigree is long and noble, he is behaving anything but “lordly” in his new home. This dog eats everything, especially shoes, enthusiastically uses his milk teeth on me because he does not yet understand that human skin is more sensitive than the fur of his siblings, with whom he has been fooling around so far.

A hanging plant has already fallen victim to him. Our living room is temporarily carpet-free, because he always peed on the most expensive with enthusiasm. Of course our dog is not house-trained yet. He “sharpens” his small pointed teeth on stone and marble figurines, on terracotta tiles, and he has gnawed the feet of a large Niki de Saint Phalle-inspired figurine that my daughter made for me years ago and to which I am very attached. It wears socks in the meantime until Byron is big enough and restoring the figure really makes sense. I have put away other decorative items that are near his realm. Lamp cords have been unplugged and hung up.

In each of my pockets of coats and jackets are now treats and poop bags. In my handbag, lipstick and cell phone have to share the space with these dog utensils. When I go out, the dog leash hangs around my neck instead of the Chanel necklace. My daily routine has changed completely. Fortunately, Byron is a late riser and doesn’t have to go outside for the first time until 7 a.m. at the earliest.

With feeding and walking, half the morning is over before I can sit down at the computer to work for the first time of the day. Then he sleeps blissfully mostly on his back, legs stretched up in a relaxed manner. Fortunately, puppies still sleep through half the day.

I’ve shut down my gym contract for six months for now, because I can’t show up there with a dog that’s not house-trained. When I lay down on my mat for yoga at home, Byron thinks I want to play with him and throws himself on me. So I change rooms and try to block out his yowling. Not exactly optimal for a meditative routine. I have to admit, I am very happy when my dear and puppy-experienced neighbour Elke takes care of Byron for a few hours or my husband takes him from me on weekends.

Despite everything, the little one is a huge joy and enrichment. When he tilts his head and looks at you with his black beady eyes, everything is forgotten and forgiven. I am already curious how it goes on with Byron and me …