Written by Margit Rüdiger on 20. August 2022. Posted in Culture. 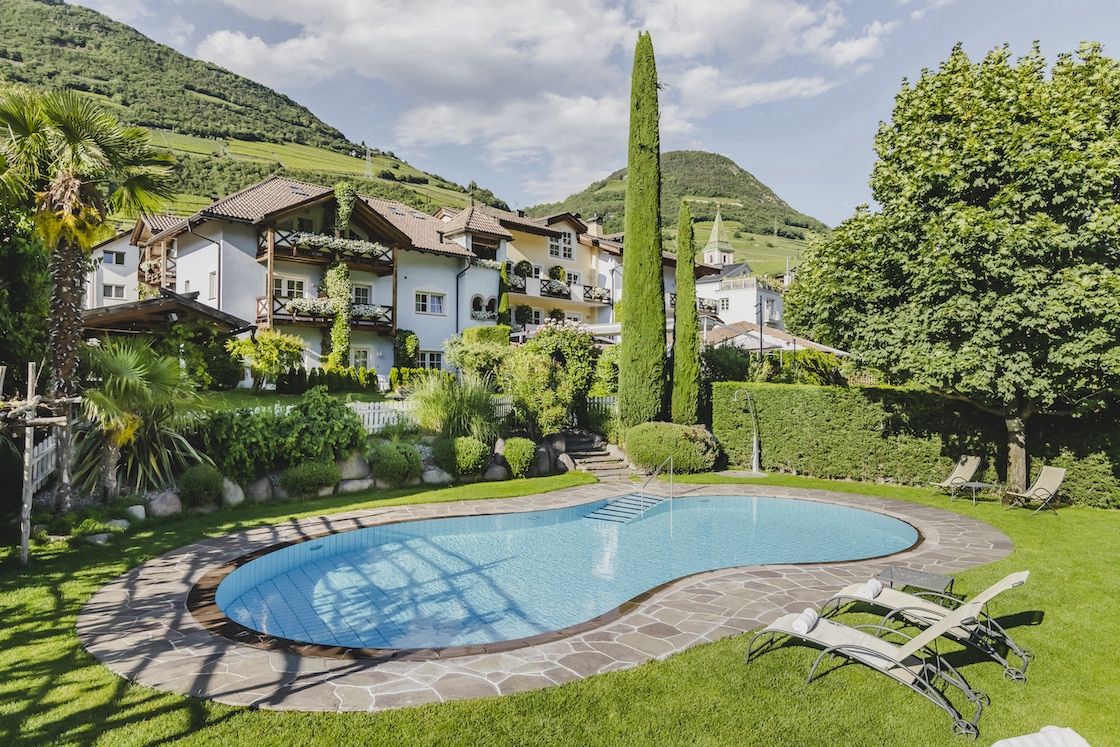 The Magdalener Hof above Bolzano is a recommendation from the heart. Because with really good hotels it’s like with a new love: You can’t get enough of them, want to tell the whole world about them and would prefer never to say goodbye.

The four-star hotel in the midst of the Dolomites is just a ten-minute drive from Bolzano, the center of South Tyrol’s capital. Close enough, then, for extended shopping and sightseeing tours. And yet the Magdalener Hof is far enough out to be able to really switch off from daily routine.

View of the mountains, jump into the pool

And there are plenty of opportunities and locations to do so: for example, at the freshwater pool, which at 4×12 meters is large enough for you to swim your laps in peace or doze on an air mattress. For additional refreshment, the pool service provides delicious drinks from the hotel bar. Enjoy the view of the vine-covered mountains. You can also relax in the stylish lounge corner with jungle wallpaper in a wonderfully manicured garden. It is especially romantic in the evening with a sundowner in hand.

Those who like to relax indoors retreat to one of the new exclusive deluxe rooms and suites in the adjacent annexe with the significant name “More Magdalener”. Its construction marked the beginning of the constant rejuvenation that the Magdalener Hof has undergone in recent years. It all started with the new annex. After its opening, the double rooms in the main house were completely renovated. The former conference room became a cool and modern gym in 2018.

Food and beverage at Magdalener Hof

The leafy panorama terrace is also a dream for relaxing – and for getting your fill with pleasure. Mediterranean dishes such as homemade pasta and pizza, seafood salad, tartar from South Tyrolean beef and a paella, which also has its fans outside Bolzano, ensure this. The cuisine of Magda, as friends affectionately call the Magdalener Hof, is market fresh, seasonal, mostly regional, very refined. In short: it tastes excellent!

The perfect complement to the culinary fireworks comes from the hotel’s own wine cellar, which dates back to the 14th century. Italian and French classics are stored there, along with top wines typical of the country. Tip: For a nightcap, the lounge & bar in the adjacent building, which is designed in the style of the twenties, is a wonderful place! There you can also get into conversation with locals, because the casually elegant bar is a popular meeting place for the people of Bolzano.

Bike ride or yoga in the garden

By the way, the best way to start the day in the Magda is with a bike ride. My tip: Lake Kaltern including the Manincor winery! The latter is not only architecturally a model operation of South Tyrolean viticultural culture, which Michael Count Goëss-Enzenberg, winemaker and graduate oenologist, has built up with great foresight. Today, his Tenuta Manincor stands for the future of South Tyrol. But also during a walk or a run along the Oswald Promenade, the splendor of the Mediterranean vegetation of South Tyrol opens up to you.

The morning can also start with a round of sports in the in-house gym. Where conferences for business guests used to be held, there is now 110 square meters of state-of-the-art fitness equipment such as cross trainers, treadmills and the like. In addition, yoga classes are held outdoors every Thursday morning in the summer. Those who prefer it “less public” can have a yoga instructor give them private lessons. In any case: Namasté in the green offers a very special atmosphere.

Also delightful: the many small, loving details in the hotel. The walls are adorned with modern collages of life in Bolzano. As a welcome greeting, there is a handy folding map for check-in to help you find your way around the premises, which features many cute illustrations. The Wifi password also puts a smile on your face: it’s spaghetti.

In addition, the friendly owner Jakob Ramoser, who now runs the house in the third generation, willingly tells you the best insider tips for Bolzano and the surrounding area. Whether you are looking for the most authentic farm for Törggelen or want to visit the most beautiful estate for an exquisite wine tasting. Whether you want to ski down the best ski slopes in winter, get to know the most sought-after location for an aperitivo or the hippest gallery – the people of the Magdalener Hof share their insider knowledge with pleasure.

My conclusion: The Magdalener Hof is not only a chic boutique hotel with character and personality, but also a place with an alpine touch and a twinkle in its eye. A place where zeitgeist meets tradition – familiar, stylish and unconventional. “With us you feel like at home. Only better,” explains the charming owner. How true! And in keeping with the hotel’s self-confident credo: If you like South Tyrol, you’ll love Magda.