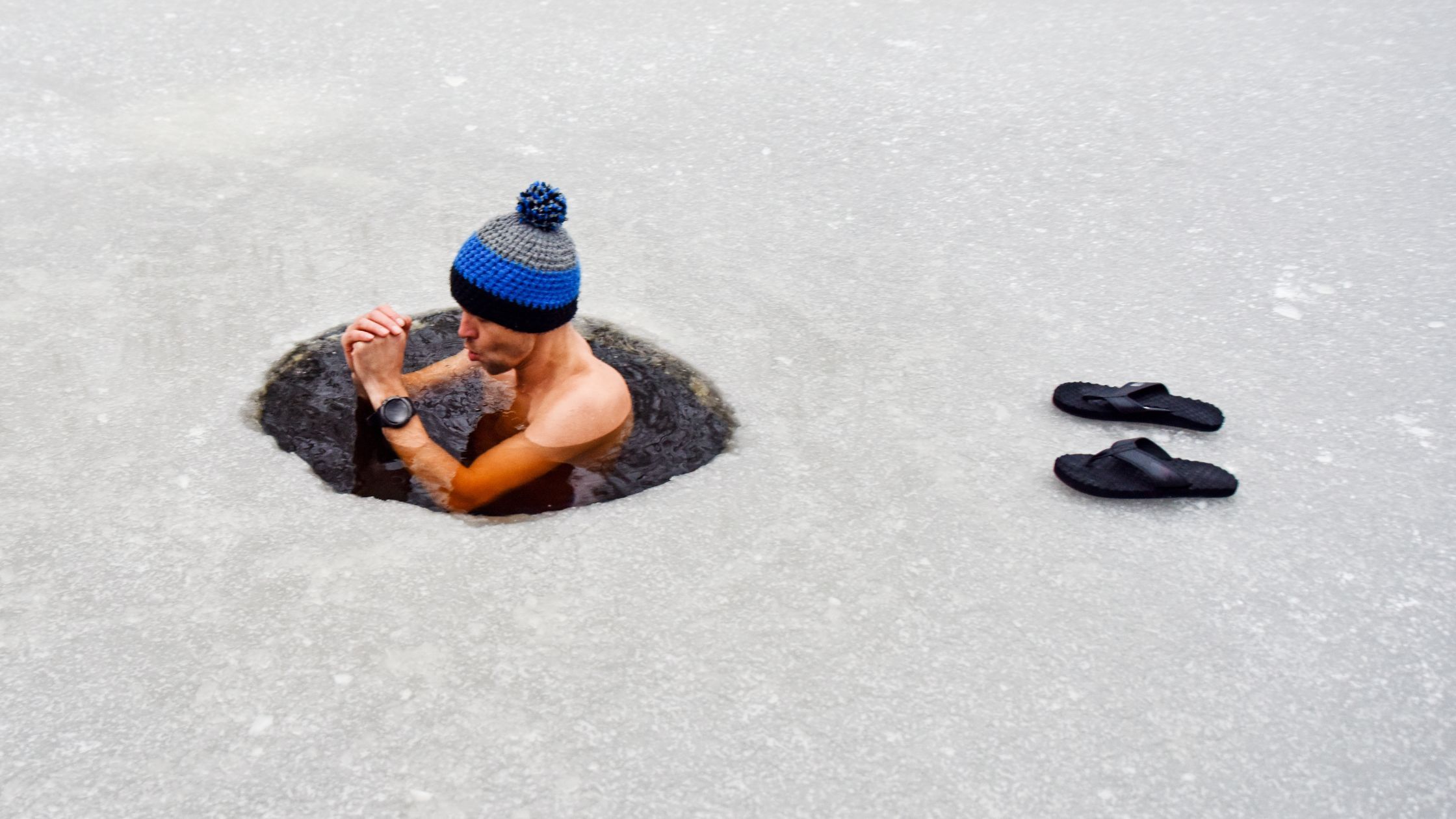 The cold therapy with ice cubes is not a new fitness trend. In many countries with freezing waters, swimming in cold water has been considered a popular sport for centuries. Even Johann Wolfgang von Goethe has ndulged in a cold therapy. It is said to have chopped up the ice in the river Ilm to take a dip in the cold river. The combination of a sauna session followed by a rubdown in the snow has a similar effect to an ice bath.

Cold therapy with many benefits

A cold therapy at 10 to 15 degrees has many advantages. It clears the head and has a relaxing effect. But an ice bath can also relieve inflammation and pain, improve sleep quality and the ability to concentrate, and boost blood circulation and important metabolic processes. Last but not least, the cold is a booster for the immune system. If you don’t want to do the icy trick right away, you can already do a lot for your immune system by taking regular cold showers. According to studies, cold-showerers are more resistant and healthier. They are 30 percent less likely to call in sick at work or school.

In terms of beauty, there is also a lot to be gained from a cold therapy: Unlike hot water, cold baths or showers do not extract moisture and oil from the skin. In this way, dryness and flaking are reduced and the skin regains its suppleness and radiance. And even more: connective tissue is strengthened, vein activity is activated. Last but not least, you are rewarded for shivering with a wonderfully rosy complexion.

Ice bathing at home or in the lake

Dare to try an ice bath in the bathtub at home. How long must or may it last? For starters, you should not overdo it and only stay in the tub for five minutes. The water should also not be too cold, so that the body can gradually get used to the unaccustomed temperature. Also, don’t submerge yourself completely right away, but hold your feet and hands in the tub first. You will notice that the feeling of cold will diminish significantly after just a few minutes.

To ease yourself into a cold therapy after taking a warm shower (not hot!), run a gush of ice-cold water over yourself for thirty seconds before getting into the cold tub. What not to do: Take a hot bath after a cold water application, as the altered circulation can cause fainting.

The same applies, by the way, to winter ice swimming in the lake, which is widespread in Scandinavia and has also become a trend here – especially among athletic people. Those who regularly bathe at temperatures around freezing point not only strengthen their immune system, but can also increase their athletic performance – although a certain regularity is necessary for this.

Fat burning is also said to benefit from freezing temperatures. Which brings us back to the topic of brown and white fat. During cold training, the brown fat cells in the body are activated, just like in the ice chamber. They release energy directly in the form of heat. In contrast to white fat, it is quickly burned again without unwanted pads being able to settle in. This process already starts at a temperature of 18 degrees or less.

And how to prepare for ice swimming? It will be obvious to everyone that just jumping in is not the best idea if you are not used to it. Cold shock can occur, which in the worst case can lead to cardiac arrest. Therefore, people with cardiovascular disorders or high blood pressure should not ice bathe anyway. Ice bath fans should never go swimming alone anyway, but always take a companion with them in case of emergency.

The sudden immersion in ice-cold water causes a life-threatening increase in breathing rate and depth in the body in the first 1 to 3 minutes. Usually, breathing then becomes frantic and rapid. Therefore, it is advisable for beginners to approach slowly with cold showers while training their breathing. Consciously breathe in and out slowly and evenly. If you master this trick, the cold in the ice tub or in the winter lake will not feel so painful later.

If you’re still hesitant about exposing your entire body to the cold, you can do it like US model Bella Hadid. She calls it “Face Plunge” and shows on Instagram how she dips her face into a bowl of ice water. You have to endure it for 30 seconds. This can reduce puffiness – especially around the eyes – as well as inflammation and boost skin metabolism.

Another variant of this trend is massaging ice cubes on the skin, which can be very beneficial. The tissue looks firmer and plumper. This method can also minimize puffy eyes and enlarged pores and relieve inflammation. The fact that the skin is reddened afterwards and feels uncomfortable for a short time is normal and passes quickly. This is due to the cold shock caused by the extreme temperature change and the increased blood circulation, but this does not harm the skin.